FurtherAfrica went to Harare to visit Boka Tobacco Floors Zimbabwe and met with chairman Mathew Boka for a one on one talk about the tobacco industry in Zimbabwe and how his company played a role in levelling the game to small farmers.

Fabio Scala: Dear Mathew, thank you for taking the time to talk to furtherafrica today. For those who don’t know the cycle of tobacco could you briefly talk us through?

Mathew Boka: Tobacco, commonly referred to as the “golden leaf”, is an important crop to the economy of  Zimbabwe. It is grown in the northern half of the country by over 100000 farmers mostly on a small scale bases with most farmers setting aside about a hectare of land for it. Tobacco seeds are carefully breed by registered seedhouses and farmers sow them in seedbeds during the months of June and July. From September to mid November the seedlings will be transplanted into the fields where its either irrigated or grown using the natural rains (dry land). Most farmers in Zimbabwe grow through dry land except about 15000 hacters which is usually through irrigation.

Tobacco reaches maturity from January usually evidenced by the leaves turning to yellowish. Its then harvested. The tobacco leaves are then subjected to heat in specially designed structures known as Tobacco barns through different levels of heat to ensure that the required levels of sugar and nicotine is achieved. After several days, the dry leaves are then moved to sheds where they are graded according the length and colour of the leaf. After all these processes the farmer then compress and put into tobacco bags (bales) the leaves targeting a maximum weight of 100 kilograms. The bales will now be ready for sale.

The final product of tobacco is mainly cigarettes or other nicotine forms like vapour. The producers of these products use middleman to buy bales from farmers. These merchants usually have an international footprint and buy for specific customers. In Zimbabwe the major merchants are Zimbabwe Leaf Tobacco buying for Alliance One, Mashonaland Leaf Tobacco for Japan Tobacco International, Tianze for China Tobacco Company (the major market and buyer). There are several other companies that buy tobacco from Zimbabwe but they sell to the above merchants.

For the buyers to buy from farmers they need space and systems. The space is required so that the bales can be layed and opened so that buyers can inspect the leaves to see whether the tobacco meet their requirements in terms of colour and size (note that the colour, size and smell of tobacco translates into the scientific levels of nicotine and sugar). The systems are required to ensure that bales relating to a grower are allocated to the correct farmer and also the buyer is invoiced correctly for what he has bought. Systems are also required to ensure that farmers are paid timely and correctly.

Fabio Scala: And how does Boka intervenes in the process?

Mathew Boka: Boka Tobacco Floors (BTF) has got both the systems and space to facilitate the buying and selling of tobacco. Farmers bring their bales to BTF who receive, weigh and lay on the floor the tobacco. The buyers then bid for each bale offering a specific price. The highest bidder wins. The auctioneers and related staff are provided by BTF.

A sale is concluded when the Farmer accepts the offered price after which BTF dispatches the bales to the merchants. Sometimes merchants do not want to participate in an open bidding process. Under such circumstances the merchants would provide inputs to specific farmers. BTF provides space and systems for these merchants as well.

Given tobacco’s importance, the Government established a regulatory board, the Tobacco Industry and Marketing Board (TIMB) whose main mandate is to ensure sustainable production and orderly marketing of tobacco.

Fabio Scala: That’s quite impressive, could you give us some of the numbers of your operation?

Mathew Boka: It is our honor to serve over 25 000 small holder tobacco farmers on our exchange and contract platforms. Whilst our facility handles 12% of the country’s tobacco we have also introduced marketing scenarios to cater for alternative export and cash crops for our stakeholders.

Fabio Scala: I understand that Boka is a legacy company created by your dad, Roger Boka, one of the country’s first black entrepreneurs, and that it wasn’t easy to break through the industry. Could you tell us a little about the company history?

Mathew Boka: Indeed our organisation is part of our third generation family business whose foundation was established during a time when a minority section of our population controlled the economic and business spheres. Native Zimbabweans were typically employees and those that operated small businesses dabbled in retail and transport services. My father was a pioneer businessman in  sectors that we previously the preserve of the elite minority.

Fabio Scala: I’ve been told that before Boka Tobacco floor was created, few black local farmers grew tobacco and the industry was largely for white commercial farmers. How did that work?

Mathew Boka: The reality was that the tobacco was produced by about 5000 white commercial farmers and only one auction facility was available then. My father was a tobacco merchant since 1987 and faced tremendous difficulties from the negative attitudes towards black business people at the time.

This led his drive to setup an alternative scenario which then saw the opening of our facility in 1997. All farmers and merchants were welcomed irrespective of their circumstances commercial or otherwise.

Land reform brought the existing dimension apparent now with over 100000 growers producing a crop of 200 million kg’s valued at US$600 million.

Fabio Scala: Since the latest changes in government, Zimbabwe has been experiencing a lot of attention from international investors, what would you say are the main challenges of doing business in the country?

Mathew Boka: A great concern and challenge has been that Zimbabwe had been operating in isolation with a view that anyone who did not agree with Zimbabwe was against Zimbabwe, so the process of changing the international perception is slow and the bulk of the sentiment is currently a wait and see approach. 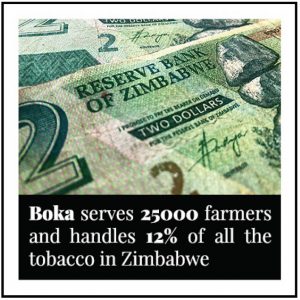 Fabio Scala: Finally, if you have to give a foreign investor your pitch about coming to Zimbabwe, what would it be?

Mathew Boka: The country is going through a very positive time coming out of a very dark period where things were very difficult for Zimbabweans.

How long it takes to get back to where it was 18 years ago will be clearer after the elections due in August 2018, I believe Zimbabwe will become one of the strongest economies in Southern Africa.

Zim is a country that flourished from tourism and agriculture, and these are not damaged to the point of no return, they just need to be managed correctly which is exactly what seems to be the aim by the authorities at the moment.

Agriculture in Zimbabwe will be the driving force behind all economic progress. We have all the tools for this to be the case with plenty of water and amazing soils.

The land issue requires total clarity in order that any uncertainty is addressed. Whilst plenty of land is available I am of the opinion that this will all be finalised once the elections have taken place, lastly the most important resource we have is the Zimbabwean people who are considered to be the most enterprising and resilient people on this continent and with good leadership this will unlock Zimbabwe’s potential.

High coffee prices in the global market in 2021 saw Kenya earn more from the crop despite a decline in...