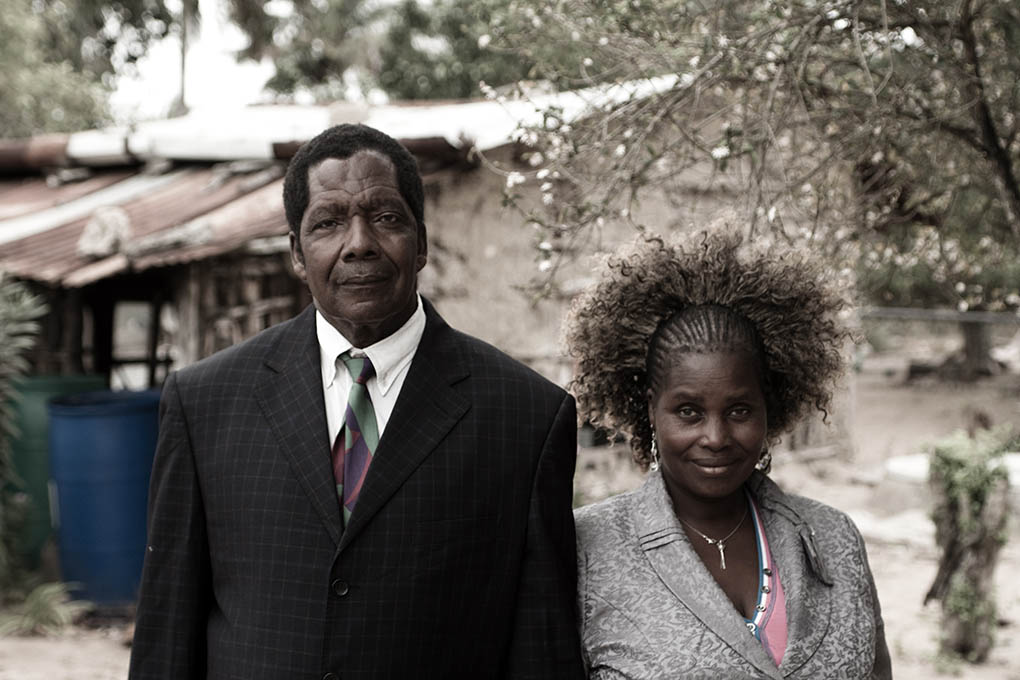 On a sunny Sunday afternoon, at Lagoa Poelela, district of Nhautse, province of Inhambane, the “event of the year” is taking place”: 73 years old Ozeia, head of the small-town married Lucy, approximately 40 years old.

The ritual  lasts 3 days – the party begins on Friday evening, with the dinner at the bride-to-be village and Lucy’s family slaughter a cow for the big occasion. The celebration lasted all night long between great music, dances, small talks and lots of laughs.

On Saturday there is the official introduction of the couple’s families; the ceremonial follows the delivery of wedding gifts and lunch. By the end of the day Sunday the actual ceremony takes place in the groom’s village, here a little goat has been sacrificed and some hen for the wedding banquet.

The morning passes with the preparations for lunch, the women cook rice, chickens and vegetables, the men have slaughtered the goat the women use to prepare the “carril de cabrito” (goat’s curry with potatoes), the children chase each other happily rolling around in the land.

The bride and groom dance all along, welcoming their guests. The party starts around 12 o’clock.
The event looks like a theatre’s representation where all the characters and the scenes follow a specific script.

The characters who play in this performance are:

The Dama and the shepherd consult each other, the show can start!
Under foliage of the big mango tree, a big table has been arranged, embellished with an unexpected tablecloth, that resembles an advertising for a motor-race.

In the middle of the table there is the “Bolo” – the wedding cake, covered to repel the voracious native ants. Behind the table, four blue plastic chairs plus another one closer to the tree for the shepherd.

It’s time for the children, they keep the attention of everyone, one with the whistle for timing, the other claps the hands and all together they sing: “ Ozeia, get out and show us your bride”, on the floor carpet and rugs are layed from the door of the house to the table under the tree, to mark the way.

With short little steps, the spouses followed from the assistants, move out from the house on a nicely wedding march to reach the table and take a seat.

Women take a sit on the carpet or on the capulanas to assist the ceremony in front of the wedding table.

The Dama introduce  the spouses to every one; two elderly women of the family standup and sing the mango song for the groom: “…wife is not like a mango that you pick from the tree, if you don’t like you thought away and you take another one. The wife that you chose you’ll take for ever”

What follows is a really short and improvised sermon by the pastor, who then moves to read a passage from the bible.
This first act finish with the shepherd and the Dama sing together to sanction the union

It’s the highlight of the party, the wedding cake is out, children and women sing to cut the cake. The bride and the groom wield the knife and cut together the cake. The first two mouthfuls are for the newlyweds, romantically they take each other, then they take the shepherd and the godmather.

The newlyweds start to share the cake with all the people at the party, the bride for the women the groom for the men.

The party goes on with singing and dancing from children, boys and girls in front of the newlyweds.
One by one they move out from the group to compliment the bride & groom with a dance.

A long parade follows, divide by groups – each group introduces themselves with a song, each one  hand delivering a gift to the bride – a glass or a capulana or a shirt or some coins 5, 10 or 20 MTN (between 5 cent to 25 cent of $), then from the bride to the groom till the Dama writes it all on a book, all the gifts

At the end the Diretor do casamento (the wedding director) announces the gifts and thanks all contenders.
The party is over under the big mango tree.

The end – The wedding lunch

Around the table under the big mango tree, the newlyweds remains, and  all the people sitting on the floor start eating.

Lucy and Ozeia exhort us to have lunch at the wedding table, we are honoured and not with some degree of embarrassment, we join them. Gracia, the bride assistant, start to serve lunch: mozambican style rice, chicken and chips, caril de cabrito (goat curry) and caril de galinha (chicken curry)

A big thanks to Colete, our maid, for helping us to understand our experience and allowing me to tell this story.