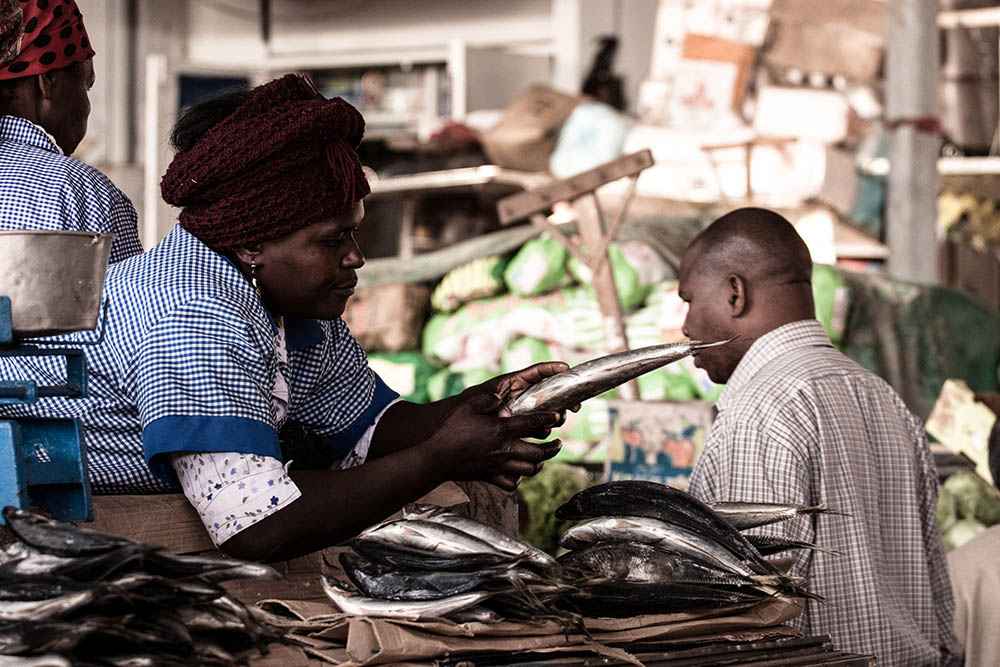 If you want to experience “true Maputo” you can’t miss this corner bay where all fresh fish are sold. Just as drive past Costa do Sol in the extreme north of avenida Marginal, the road running parallel to the coast, part of the “Maputo ring road”, the city’s latest mega-project in anticipation to the opening another large infrastructure, the “Catembe bridge”.

As soon as we get there, we begin to see the stalls with planks displaying a wealth of fresh catch, laid down by the women working in the market, especially huge and delicious blue crabs, mollusks – some similar to clams and fish of various kinds.

The crabs here (caranguejo) are one of the most appetising foods you will ever see, along with giant prawns prepared in different ways. Watching over the stalls are local women dressed up modestly but with fantastic coloured “capulana”.

The “capulanas” itself, beautiful fabrics painted with bright colours and exotic shapes, are distinctive features of the country. The “capulana” is used today in a multitude of ways: from carrying the little ones on their mother’s back, as skirts for the ladies, as hats, or even as a mat to sit down. In short, in a “capulana” you will find much of Mozambique.

Differently from the old, famous fish market of Maputo, this new home is very different, both in   its location and features, nonetheless, it maintains its tradition of fish preparation. If you want to eat well spending a little, this place is for you, my advice is to go in during the day to choose the best fish. The market is well organised, from your arrival and across the make shift restaurants, there will always be someone around you to show the various stalls, who will make sure the cooking with be done to the best of your taste.

The food will be served on the tables on the side of the building, (in the old fish market was on the back) the restaurant will cook for you!!