It is a government requirement for the payer of income to withhold or deduct tax from the payment (income) accruing to the payee, and remit that tax to Zimbabwe Revenue Authority (ZIMRA). The withholding collection mechanism is operated in such a way that it is the payer not the payee, who pays the tax to ZIMRA thus WHT is deducted at source, the payee receives the net of income after tax.

Income which has suffered withholding tax is not subject to further taxation. WHT is charged on employment income, payments of interest, dividends, shareholder’s tax securities and royalties, this applies to both residents and non-residents of Zimbabwe.

A registered business operator, government of quasi government which is supplied with goods or services on a contract entered by it with a person who does not hold a valid tax clearance certificate must withhold 10% of the contract value for each contract payment with the value of $250 or more. However, a payee who holds a tax clearance ITF 263 is exempted from such tax. A tax clearance is only issued to tax payers who have no income tax, Vat and PAYE arrears.

Financial institutions are required to withhold 20% tax from interest paid to a Zimbabwean source on any loans or deposits to a person who is ordinarily resident in Zimbabwe. With effect from 1st January 2009, there is a tax free portion of USD$250 per month on interest accruing on any deposit with a financial institution including interest on banker’s acceptances and other discounted instruments to a taxpayer aged 55 years and above.

Interest paid from a source within Zimbabwe or payable by a person who is ordinarily resident in Zimbabwe to a non – resident is charged withholding tax at 10%. Exemptions to this tax are POSB, Tax Reserve certificates, 4% Government six years’ bonds, Building Society Class C shares and interest earned on foreign currency denominated account.

Withholding tax at the rate of 20% is charged on fees paid to non residents in respect of technical, managerial, administrative or consultative services including director’s fees.

Withholding tax at the rate of 20% is charged on royalties paid to non-residents for the use of patent, trademark, formulae, equipment, motion picture film. Licenced investors are exempt.

Section 22 Withholding tax on Capital Gains stipulates that, withholding tax at the rate of 10% of the sale price of the specified asset and is payable to ZIMRA. The tax deducted is credited against capital gains tax payable.

Withholding tax can be final or non-final, when it is final no further tax or return is required from a payee. WHT is final on dividend and on interest from local financial institutions. It is non final on fees and royalties’ payable to non-residents. In non-final WHT, a nonresident can opt to submit a tax return to ZIMRA on the Zimbabwean sourced income. The non-resident can be able to claim the expenses in the production of the sourced income. The rate applicable shall be the corporate tax rate. The payer can then claim the tax withheld as credit against income tax chargeable.

WHT enables ZIMRA to achieve easy collection of revenue by collecting tax from a reasonable and manageable number of payers who are already registered for other revenue heads rather than a much greater number of payees as most of them are outside the statutory registration requirement. 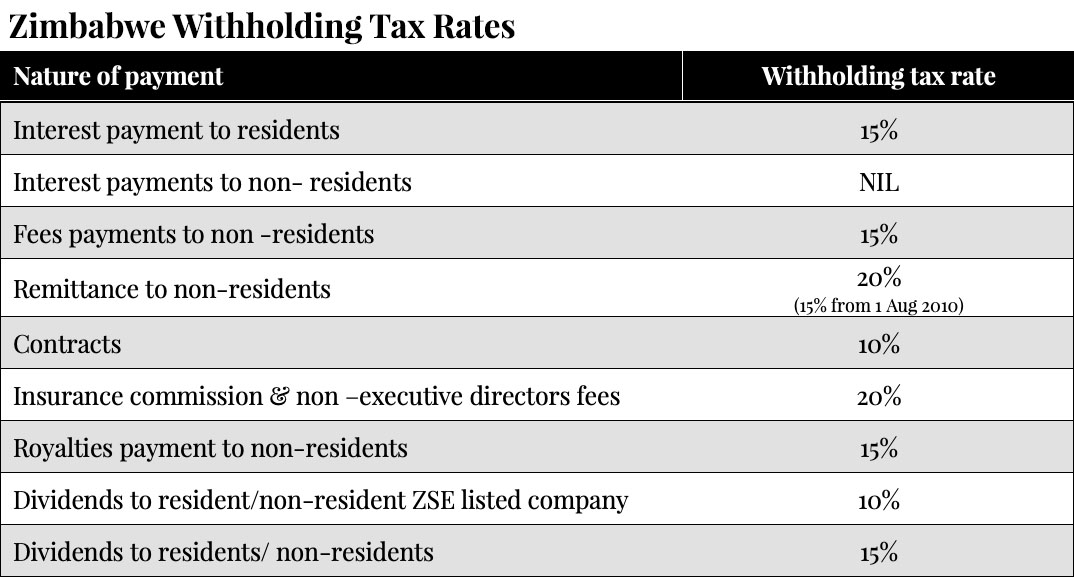 Angola’s national oil company Sonangol announced the start of construction on its second Suezmax tanker, as part of a two-part...

Join 100,064 other subscribers.
No Result
View All Result