Data and M-pesa transactions accounted for almost 50 per cent of Vodacom Tanzania Plc`s income last year thanks to an over Tshs.170 billion ($73.9 million) investment to expand and modernize the network.

Vodacom`s Finance Director, Jacques Marais said in Dar es Salaam on Tuesday 14th May 2019 during a briefing to investors and the media of the company`s annual results for the year ending March 2019.

Marais said M-pesa remained a leading revenue growth with an increase of 14.5 per cent during the period with seven million customers using the service regularly transacting a record Tshs.49.3 billion ($21.4 million) per month.

`During the year, we added 620,000 new M-pesa customers, a growth of 9.7 per cent M-pesa transaction volumes increased 16.4 per cent and M-pesa values transacted grew 16 per cent,` he said while noting that `Lipa kwa M-pesa` platform had 11,000 merchants who processed Tshs.1.1 trillion ($478.2 million) or an increase of 180 percent during the period.

On data performance, Marais said revenue growth increased by 17.9 percent with robust demand registering an increase of 34.2 percent thanks to 100 percent growth in the fourth generation (4G) volumes. 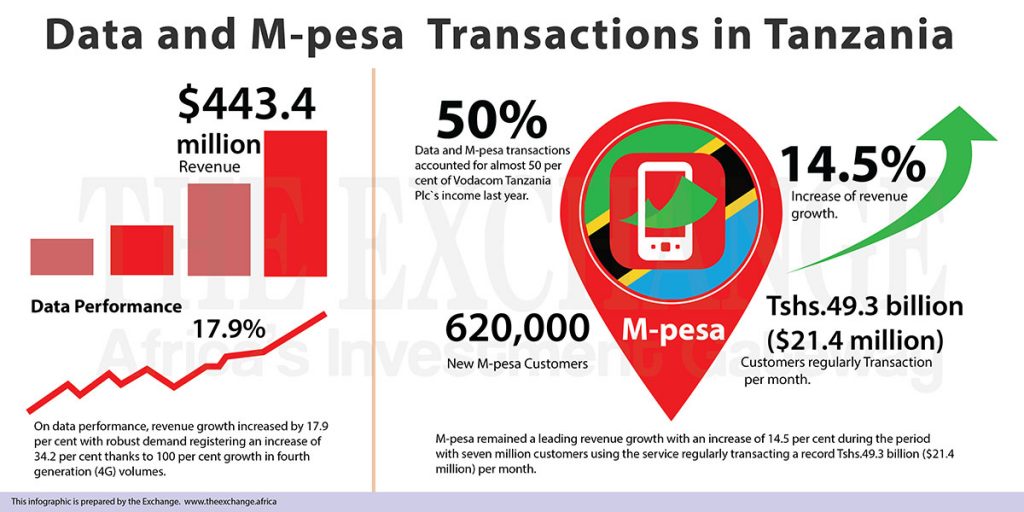 `Our social media partnerships and smartphone campaigns supported by the continued investment in our network infrastructure have managed to deliver 7.4 percent growth in data customers to 7.9 million of which 3.5 million are using smartphones, an increase of 12.6 percent, he added.

`The reason for the reduction of net profit is because last year we sold shares we owned in Helios Towers, a one of income outside our core business which was not there this year,` the Finance Director explained while stressing that net profit this year represents growth of 33.8 percent.

Profits were also impacted by the Tshs.5.3 billion ($2.3 million) penalty imposed on the company after being found guilty of violating regulations in disclosure of international traffic volumes. The company which said its accounting was also impacted by a change in accounting mechanism from IAS 18 and IAS 36 to IFRS 9 and IFRS 15 has been on a sound growth path.

Going forward, Marais said the company will continue its digital journey by leveraging data analytics and segmentation saying with the acquisition of 700 MHz spectrum from Tanzania Communications Regulatory Authority (TCRA) during the year, it will increase its 4G coverage.

Vodacom Tanzania is the only telecom firm to have listed on the stock exchange in Tanzania. It raised Tshs.489 billion ($213million) in the initial public offering (IPO) in 2017, Tanzania’s largest ever, which attracted more than 40,000 local investors, most of whom were first-time participants in Tanzania`s stock market. Currently, the telecom company has over 14 million subscribers accounting for over 34 percent of the market share.

The government of Tanzania has announced a push up of price of maize following drought and poor harvest of the...