TICAD7: Corporate expansion in spotlight at Africa conference – what you need to know

The city of Yokohama is set to host The Seventh Tokyo International Conference on African Development (TICAD 7) from Aug. 28 through 30, as dozens of top leaders from African countries and international organizations will gather in Japan.

TICAD, which was first launched by Japan in 1993, has undergone critical transformations in recent years, and there are plenty of reasons for Tokyo to reform TICAD in the drastically changing African environment.

To avoid direct competition with the growing Chinese presence in Africa, Japan has shifted its focus of economic assistance to quality, rather than quantity, Japanese diplomats and experts say.

TICAD 7 will also be more business-oriented than previous iterations as the Japanese private sector is “finally becoming serious” about the African economy, said Shigeru Ushio, director-general of the African Affairs Department of Japan’s Foreign Ministry in a recent interview.

“The (Japanese) private-sector businesses have requested (the Japanese government) to let them take the driver’s seat and speak during a plenary meeting of TICAD for the first time,” he said.

As a result, TICAD 7 will have a business dialogue session by representatives of the private and government sectors on Aug. 29. In the past, such a session was organized as a side event, but this time it will be upgraded to a plenary meeting for the first time.

There are clear reasons for Japanese firms to be more serious about business in Africa.

The African economy, which once suffered heavily from regional conflicts, poverty and food crises, started to enjoy great benefits from surging prices of various natural resources, such as oil, minerals and other commodities in the 2000s.

From 2000 through 2017, African countries maintained high real economic growth, with an average of 4.3 percent, according to the United Nations Conference on Trade and Development (UNCTAD).

Meanwhile, the population on the continent is predicted to continue growing to 4.28 billion in 2100. The population of Asia — the main overseas market and manufacturing base for major Japanese firms — will peak in 2055 and start shrinking, according to the United Nations.

“At the end of this century, one in every four humans in the world will be African,” Ushio said. “So Africa will be highly significant as a market. It’s regarded as ‘the last frontier of the 21st century.’”

Keidanren, Japan’s most powerful business lobby, is well aware of the great potential of the African continent.

“Africa has realised high economic growth thanks to its rich natural resources and other factors. The gross domestic product surged from $632 billion in 2001 to $2.1 trillion in 2016, as the economy expanded 3.4 times,” Keidanren said in its report on Africa in September last year.

“Africa has far more potential since economic growth is expected to continue and the middle-income class will expand,” Keidanren said.

Still, the future of Africa is probably not as rosy as some optimists argue.

Rapidly growing urban populations in Africa could cause a massive food shortage, as the land productivity of African agriculture is far lower than the world’s average, and Africa still needs to import massive amounts of staple foods, warned Katsumi Hirano, executive vice president of the Japan External Trade Organization (JETRO) and an expert on African affairs.

Without drastic improvement of land productivity, the rapidly increasing population would only pose a grave burden for the future of Africa, Hirano said.

“African people may say they no longer need assistance, but they do need it to raise productivity of grain production,” Hirano said.

Because of this, both the private and government sectors must cooperate and tackle this problem, and such efforts won’t take root unless farming becomes a profitable business, Hirano said, emphasizing the need to further promote agricultural businesses in Africa.

During the interview, Ushio also admitted Japan has been “lagging far behind” other countries as far as business in Africa is concerned.

A vast majority of Japanese firms have long put emphasis on Asia, and many firms appear to be still reluctant to advance into Africa although they are well aware of the potential of the African economy.

Japan’s foreign direct investment stocks in Africa stood at just $8.7 billion at the end of 2017. Meanwhile, France made the largest direct investment in Africa with $64 billion the same year, followed by the Netherlands with $63 billion, the U.S. with $50 billion, Britain with $46 billion and China with $43 billion.

In the previous TICAD meeting in Kenya in August 2016, Tokyo pledged to extend economic cooperation funds totaling $30 billion over the next three years, to be provided by both the private and government sectors. Meanwhile, Beijing in September 2018 organized a similar Africa summit meeting in Beijing and pledged to provide as much as $60 billion. 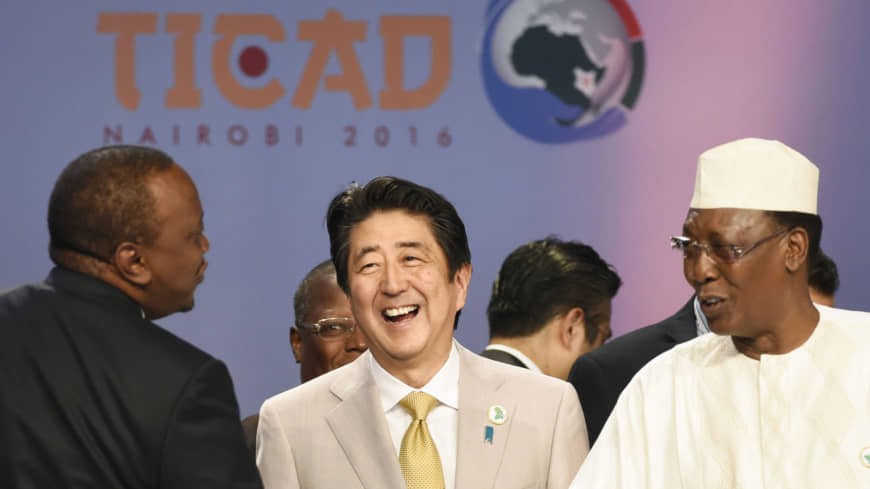 Shinichi Takeuchi, professor and head of the African Studies Center at the Tokyo University of Foreign Studies, pointed out that a considerable portion of the Chinese assistance is loans, and Japan should not simply compare the Chinese loans to its assistance.

Still, experts all agree that Japan would no longer be able to beat China in terms of the amount of funds it can provide to Africa, an apparent reason that Tokyo is beginning to focus more on “the quality” of its government economic assistance and private-sector projects.

While greatly expanding its economic and political presence on the African continent, last year Beijing appeared to have incorporated its development policies for Africa into its Belt and Road infrastructure development initiative, said Mitsugi Endo, a University of Tokyo professor and a noted expert on African politics.

“China was interested mainly in (natural) resources in Africa in the early 2000s, but now its focus has shifted to infrastructure system exports to Africa. The move is probably interlocked with the Belt and Road initiative,” Endo said.

In fact, some African countries have reportedly started to be concerned about the so-called “debt trap diplomacy” of China’s Belt and Road initiative.

Under the Belt and Road initiative, China aggressively extended loans to many countries, and as a result, some states ended up being saddled with snowballing debts.

For example, Sri Lanka received high-interest loans from China to build the Hambantota port. Being unable to pay back loans with ballooning debts, Sri Lanka eventually agreed to lease the port to China for 99 years, an incident that has badly damaged the reputation of China’s loan-based infrastructure projects.

Japan seems to take a different approach from that of China, and the Foreign Ministry’s Ushio stresses that Japan’s focus of its assistance to Africa is now quality, rather than quantity.

For example, Tokyo attaches much importance to “the fiscal soundness” of a country it will extend loans to, Ushio said.

Japan will also consider “the total cost” of a project, including repair and maintenance expenses. Constructing a robust road may be expensive, but the total costs would be lower in the long run, if it requires less repairs in the future, he said.

Another key for Japanese firms to succeed in Africa is forming partnerships with local or foreign firms of other countries well-versed in African business, Ushio and Hirano of JETRO both emphasised.

For that purpose, TICAD provides good opportunities because it will host a total of 257 side events useful in networking, such as seminars and product exhibits, Ushio said.

TICAD is also open to various businesses and organisations because it is co-organized by Japan, the United Nations, U.N. Development Programme, World Bank and African Union Commission. Meanwhile China organizes its African summit meeting on its own, he pointed out.

Hirano of JETRO in the meantime argued that Japanese firms are still heavily “introverted” and focused only on business in Japan and other parts of Asia, in particular China and the Association of Southeast Asian Nation countries.

Many Japanese people believe Japan heavily relies on exports and Japanese firms have been heavily globalized. But comparison of trade figures suggest otherwise as Japan’s trade dependency is far lower than the average of developed countries, Hirano pointed out.

The low dependency on overseas markets also means Japanese firms have much room for growth if they globalize more, Hirano said.

“Japan needs more global companies and has to connect more to the outside world, ” he said, adding that Japan needs to focus more on Africa as a prospective future market.

“In that sense, I believe TICAD this time has more meaning for Japan, rather than Africa,” he said.