The top ten Countries producing cocoa in the world are located in West Africa and South America; Ghana and Ivory Coast produce alone the 60% of the worldwide cocoa. 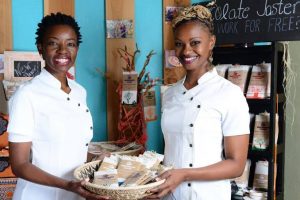 Although Tanzania cannot be listed among the major producers of this raw material, I would like to write the inspiring story of Jaki Kweka, young co-founder of Chocolate Mamas – Gourmet Tanzania Chocolate Ltd.,which produces hand-made chocolate totally made in Tanzania.

I have read some articles and watched some video interviews of her and thus discovered that she was an attorney, who used to make desserts as a side hobby in her spare time.

One evening she was chatting with a girlfriend – who has become her business partner – about her dream of making a professional change by starting a full-time patisserie. While discussing the pros and cons of such a business, she realized there was a great obstacle hindering its implementation: the lack of high quality locally produced chocolate.

Here it came the inspiration.

Jaki decided to leave her career as an advocate to commit herself to the creation of a business, producing the first Tanzanian handmade high quality chocolate. It was 2011, by then.

What are the main keys to success embraced by Chocolate Mamas in these years?

Jaki’s story is one good example of a fair and ethic small enterprise, bringing an absolute positive impact in this Country.

I am a genuine, real southern Italian lady. After six years as internal auditor, I left the world of corporate to search for my life purpose. In 2010 I arrived in Tanzania for the first time: it was supposed to be a sabbatical year, but I decided to remain to invest my skills side by side with social enterprises, local artisans and women entrepreneurs. I am a happy and busy mother of two and founder of WanaWAKE-UP!, through which I support social enterprises and artisans businesses to expand their presence into the global markets. I am a huge supporter of women's sisterhood and I strongly believe in the great potentiality of women for the Tanzanian (and not only!) economic growth.