The Basics of the African banking market, by N’Gunu Tiny

The Banking market is changing rapidly across the globe, from a technology and product perspective. Like most markets, Africa has clearly defined segments, but also a large population expected to enter the banking market in the coming years.

Business is changing and motivations are changing alongside. It is vital to build strong, future proof businesses, with solid revenue streams that support local and regional economies. But it is now just as important to build business that are socially, environmentally positive, where ethical governance is at the core of the businesses mission statement. When I get excited about the sector, its isn’t just as an investor, it’s as a father, as an employer and as a citizen.  I am proud to be able to build business that add value to people’s lives. In difficult times, it is these motivations that really drive me.

Below, I have drafted a small outline of the African banking market from the perspective of a service provider, an investor and a person that has a lot of passion and drive to help develop products to bring opportunity to the people.

The general, non-banking market is likely to follow a similar path from China and India in relation to growth and economic adaptability. The major difference between the three, in relation to the potential for FDI, is that Africa has a far more intimate cultural and language connection with many parts of Europe and both North and South America. Therefore, whilst a similar growth trajectory is expected, investors from global areas that share a common language may be far more likely to commit capital due to this sense of common culture and the reduced language barriers.

Although much focus has been concentrated in the un-banked and lower segments of the market, whilst this is the fastest growing, the middle market offers a fantastic space to really develop revenue streams through different channels that are complimentary to core banking and payments. It is estimated that between 70-80% of these customers require access to some of the major core banking products such as insurance, investments, credit and depository rates.

People always ask me about the perceived shift from traditional routes to banking via telegraphic digital to a fully digital offering. The clearest path still remains a relationship where telecoms, banks and FinTech’s combine to offer products but in a more cost-effective manner to the traditional route. By this I mean, expect such things as a preference to deploying a network of agents over establishing a network of branches.  Existing entrants alternatively are still held back by legacy issues and require the entire digitalization of the existing platform, which is time consuming and expensive.

The future for me is fairly clear with new entrants being entirely focused around the digital application of products and services. For example, new wallet-based accounts where the digital ID is a biometric eye print, will replace the need for even government ID. People will be able to open accounts, receive, store and send money entirely without the need for traditional forms of KYC. Once this has been established, you will see the mass adoption of the more people into the entire system. The banks will now be at the forefront of that transformation. At the Emerald Group we also see the rise of third-party non-banking platforms becoming an integral and important part of the payments rail.

The simple fact is that you either adapt to new technology and thinking or your business will not survive. It is still surprising that traditional business in every sector don’t highlight the importance of digitization. It is not simply sitting on the horizon but is already part of everybody’s life in pretty much every sector. Business have to re-evaluate how they look at themselves and place digital in fore-front of the business model. You are nothing if not digital, in many senses.

As a sector, African banking is the fastest growing globally and the most profitable after Latin America. Profitability is an important factor as it drives competition and thus innovation, that ultimately leads to more people getting banked which in turn hopefully leads to a better quality of life. The markets within the region are also very different in size, structure and capabilities. A recent article by McKinsey & Company, ‘Roaring to life’, details the segments quite nicely and underlines a few key metrics that explain why Banking in Africa has such huge potential for both consumer and investor.

Firstly, you have the mature markets which is made up of the likes of South Africa and Egypt. Then we have the fast-growing transitional markets such as Ghana and Kenya followed by nascent markets such as Ethiopia and the DRC that have low GDP per capita. Lastly the Sleeping Giants as McKinsey names them. Both Angola and Nigeria fall into this category, where banking penetration is lower than expected given income levels. There is huge room for market share in this segment, especially in Credit where there is a 3% credit bureau coverage. The enclosed shows how Angola sits into a very sweet spot with a high GDP per capita yet very low % banking penetration. 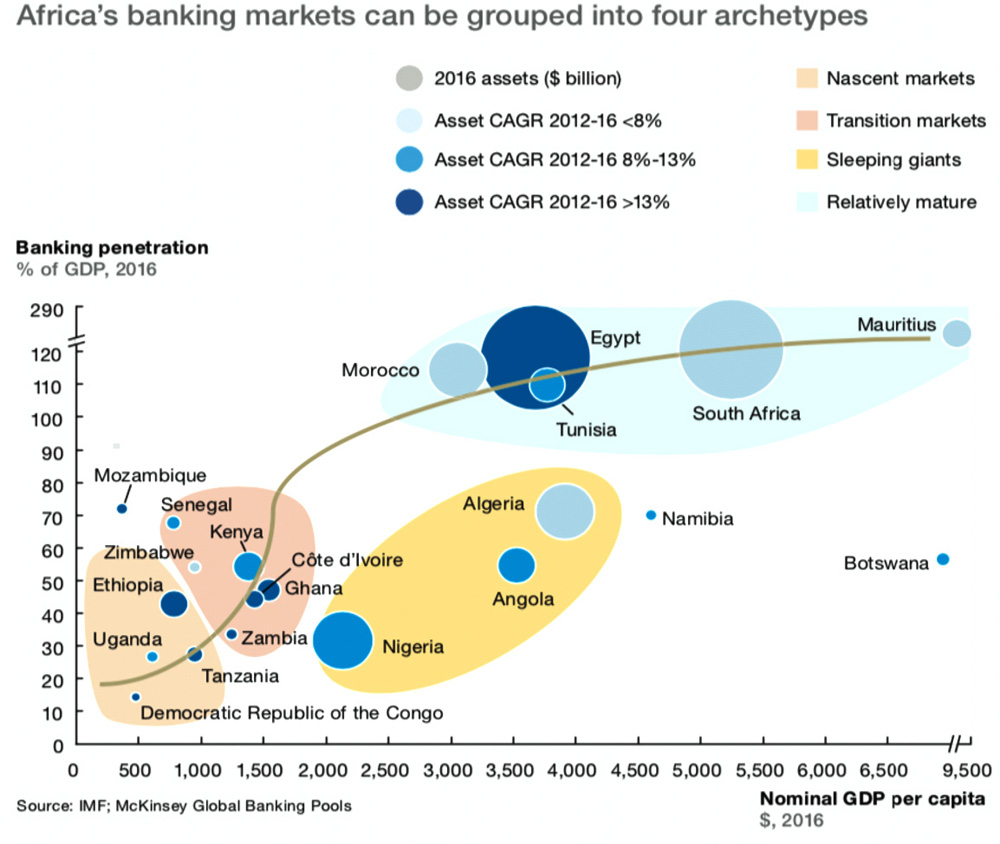 Return on Investment as a key metric

As an investor, one of the first items you look at is ROE. What we are looking for here is how effectively a company or industry is able to generate profit from the money investors add. This metric is often overlooked but is vital in the growth sector.

What is unique and quite astounding about the banking sector in Africa, is that ROE doesn’t usually have the ceilings it does elsewhere. What we mean by this and what the McKinsey report highlights, is that banks that set strong ambitious targets, tend to have an increasing ROE rather than the inverse. It pays then to be aggressive in your strategy.

We could cover the nuances of the banking sector in more detail at another time, but what I would like to finish with is a synopsis of what we at the Emerald Group see as some of the key considerations that need to be understood when entering the market

The first is that the majority of unbanked use features phones and not smart phones as the main means of communications, thus creating a set of problems unique to each geographical l area. In Angola in particular, mobile penetration is considered to be at decent levels, but access to internet less so.

Then there is the fact that a huge degree of potential customers that still don’t have a valid ID document which requires onboarding via others means. Bio-metric science has created a solution and when placed on top of Distributed Ledger Technology or Blockchain technology, we have a future proof way of incorporating people into the banking sector. As smart phone penetration becomes more adopted, we will see a huge spike in the ability to onboard people quickly and securely.

Lastly, whilst Africa is moving towards a common market, it is still some way from the likes of Europe and legislation such as PSD2 that opens up competition and integration channels.

Even with the unique challenges that faces the market, Africa is probably one of the most interesting regions to be involved in both the Tech and Banking space. Combined with the social impact the sectors can bring, I am extremely proud and excited about facing the challenges ahead and bringing a better more convenient way of living, through finance, to the consumers in Angola and across Africa.

N’Gunu Tiny is the Chairman of The Emerald Group