Analysis: UAE has potential to double exports to Africa

There is tremendous potential for the UAE to double its exports to African countries with plastics, rubber and sugar identified as the top products offering the most untapped export potential estimated at $867.9 million, $457.9 million and $291.7 million, respectively.

The analysis, based on recent data from the International Trade Center (ITC), relies on an economic model using supply and demand data, along with ease of trade indicators to determine the untapped export potential for a selected exporting country in the chosen target market. The findings were released ahead of the 5th Global Business Forum Africa which will be held in Dubai on November 18th-19th 2019.

The UAE’s exports to African countries have recorded strong growth over the past decade, supported by a number of key trends and factors such as expanding UAE-Africa trade links, Dubai’s ongoing efforts to enhance its position as a gateway to African markets and improving economic conditions across the continent.

The findings indicate that the UAE’s exports of certain products, such as electrical devices, machinery, and vehicles, have exceeded their export potential to the African continent, which is an indicator of the development of trade links between UAE exporters and African markets. However, it points out that the UAE is still developing its “hub status” for the export of the majority of other products.

In the category of metal products, the analysis suggested that UAE exports to Egypt could potentially be increased to $34 million), followed by Ethiopia ($26.6 million), Libya ($24.5 million), Angola ($23.6 million) and Senegal ($10.9 million). 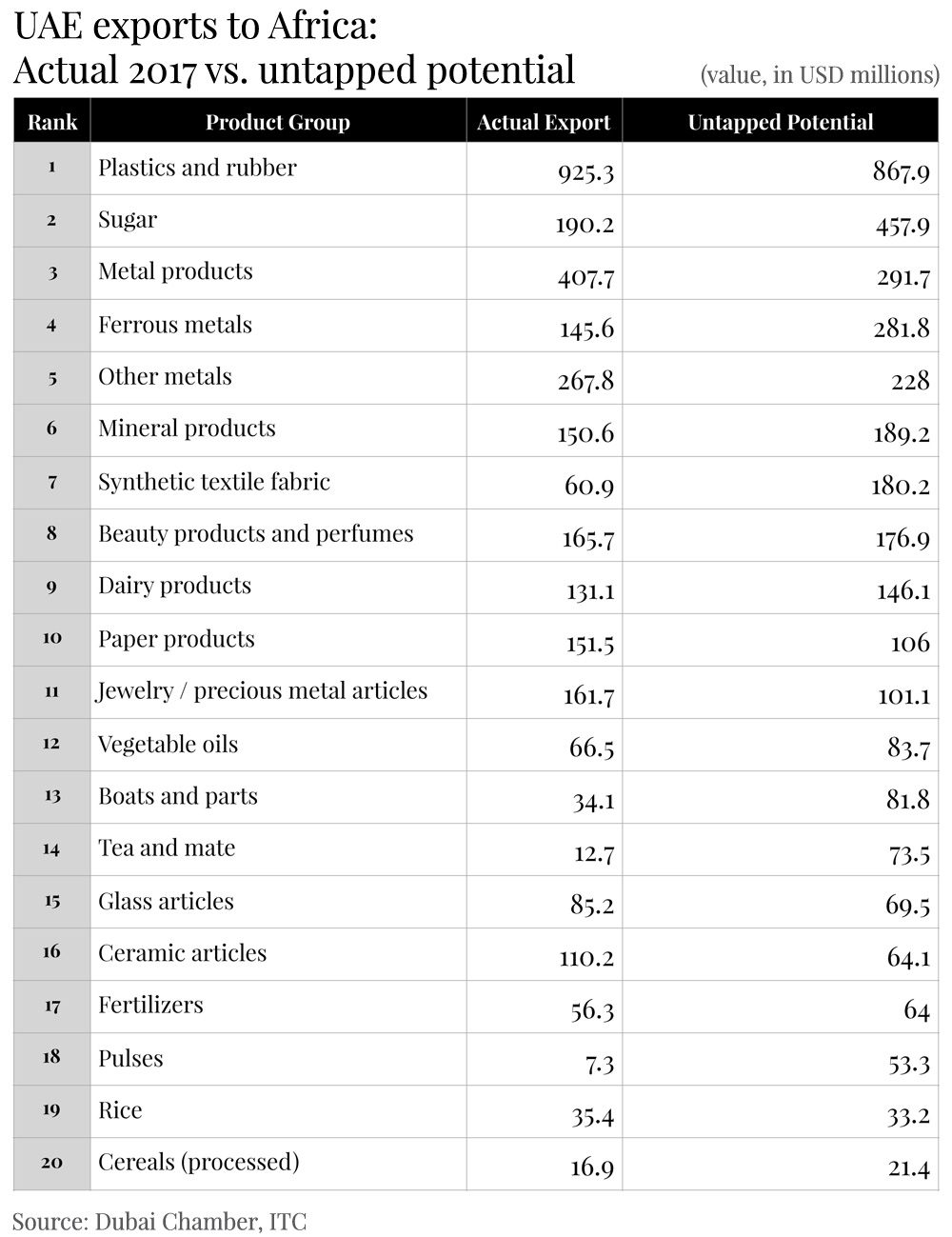 The analysis outlined several recommendations for UAE traders to boost their exports to high-potential African markets. Suggestions include leveraging and utilizing existing platforms and resources that can help them explore new business opportunities emerging across the continent such as the Global Business Forum Africa in Dubai, Dubai Chamber’s network of representative offices in Africa, and th Chamber’s Africa Gateway smart platform.

GBF Africa 2019 is organised by Dubai Chamber under the patronage of His Highness Sheikh Mohammed bin Rashid Al Maktoum, Vice President and Prime Minister of the UAE and Ruler of Dubai. The high-level forum, held under the theme “Scale-Up Africa”, brings together heads of state, ministers, policymakers, prominent business leaders, industry experts and entrepreneurs from Africa and the UAE to connect, collaborate and explore new avenues of economic cooperation.