Trade tensions between China and the US will bring about a change in global trading patterns, giving African countries a chance to step in and make the most of opportunities to form lucrative new trade relationships. This is despite the potential negative effect of the US-China trade tensions on Africa.

If the ongoing trade tensions cannot be resolved, they could result in a global economic recession with serious repercussions for African economies. China and the US are primary trading partners with numerous African countries and any economic fluctuations or increase in tariffs in these countries will be felt down the global supply chain.

An economic downturn and financial market volatility will affect the price of commodities and the value of African currencies, and with many countries facing foreign exchange shortages, they will be less able to import foreign goods.

Numerous African countries also rely heavily on foreign loans and could find it hard to service international debt due to tightening monetary policies. There is also concern that, subsequent to the trade wars, China could have excess stock of products that could find their way to Africa to recoup trading losses in the US. This could be seen as an act of “dumping” if the selling price in the country of origin is higher than the selling price for export to Africa. And if Chinese production falls due to higher tariffs on sales, African commodity suppliers could face decreasing demand.

Against this background of geopolitical shifts in trade relations, however, China has noted that it wants to work with African countries in a participative and inclusive way. In 2019, China and representatives from 53 countries in Africa discussed mutual trade and co-operation at the Forum on China-Africa Co-operation. China reiterated that it is looking for new opportunities to trade with Africa to counter trade tensions with the US.

China is one of Africa’s biggest trading partners. According to the China Africa Research Initiative, China-Africa bilateral trade has been steadily increasing for the past 16 years. Further, our recent research with IJGlobal showed that China has targeted sub-Saharan Africa in recent years, both in the context of its need for natural resources and as part of the Belt and Road Initiative (BRI). 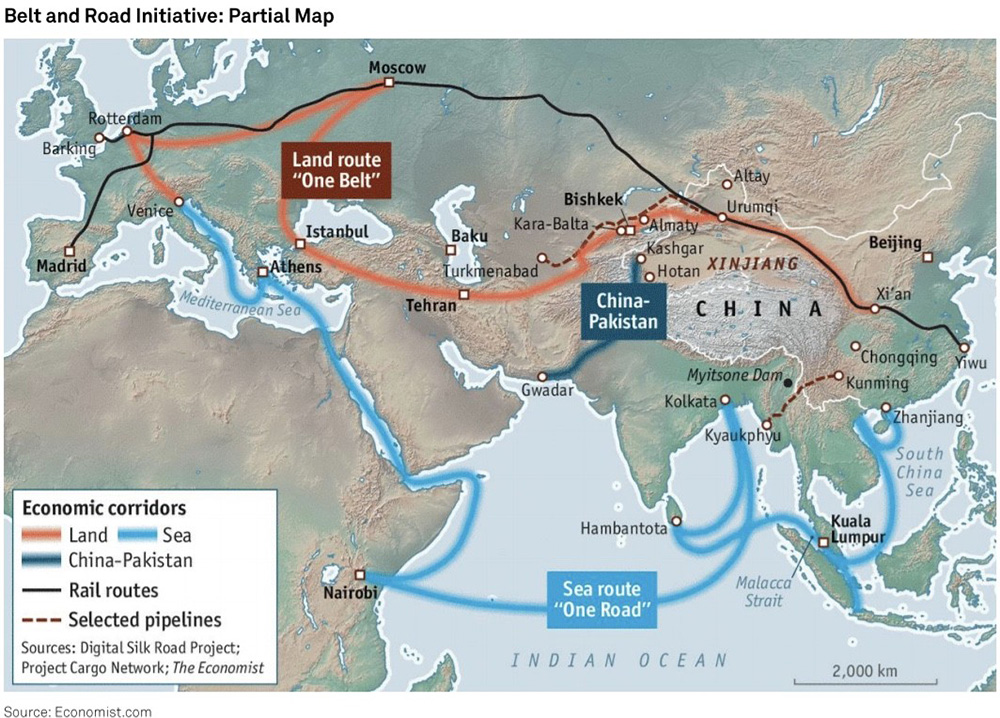 Chinese policy banks loaned $19bn to energy and infrastructure projects in the region from 2014-2017, almost half of which was in 2017. Africa is reliant on large-scale infrastructure development to boost trade and investment, and so African countries have been willing recipients of Chinese infrastructure funding, albeit with some caution.

There is rising concern among African sovereigns about the long-term effects of their dependence on China. China has noted, however, that it is looking to trade with new markets that won’t subject it to higher tariffs and that it wants to be considered a responsible investor. In the meantime, African countries have begun building capacity to correct imbalances between borrowers and lenders in the negotiation phase.

The BRI is also becoming increasingly important for China, particularly as the global trade tensions relate to the restructuring of global supply chains. Our BRI & Beyond Forecast, produced with Silk Road Associates, details how the BRI has helped China to diversify trade relationships, as well as acting as a stabiliser for China’s foreign reserves position and defending the renminbi against depreciation.

One of the models for likely BRI investments, the aggregated “Baseline Model”, predicts an estimated $910bn in BRI investments in the 2020s, with sub-Saharan Africa receiving the biggest share — 25%.

Despite the prominence of Chinese investment, the US is also a major player in Africa and is reportedly concerned about the security implications of China gaining control of strategic assets as a result of unsustainable borrowing by some developing countries. The US Power Africa programme reported recently that over five years it funded 80 transactions valued at more than $14.5bn, and the International Development Finance Corporation recently doubled its lending ceiling to $60bn, both providing a boost to infrastructure activity. In 2018, the US outlined its Africa strategy by reiterating its commitment to strong partnerships with key countries in Africa.

Africa is also looking internally to boost trade. The recently launched African Continental Free Trade Area (AfCFTA) will streamline intra-African trade across the continent, reducing dependence on foreign investors and creating investment frameworks that allow Africa to trade on its own terms. AfCFTA will also appeal to foreign investors looking to trade seamlessly across borders.

Legislative reforms that encourage investment and boost infrastructure development are paramount for African countries to take their place on the global stage. While ongoing global uncertainty and economic instability remain cause for concern, the shifting global trade patterns are clearly creating a kaleidoscope of opportunities for the continent.

Origin Africa: promoting textiles and apparel made in Africa

Islamic banking is poised for growth in Africa