The upgrade of Mozambique’s Long-Term Foreign-Currency IDR reflects the curing of the restricted default following the completed restructuring of its sole Eurobond (MOZAM – USD726.5 million, 10.5%, maturing in 2023), which had been in default since January 2017.

On 30 October 2019, the bondholders exchanged MOZAM for a new USD900 million bond, covering arrears on principal and interest of the previous bond. The terms also include a maturity extension to 2031, a coupon of 5% until 2023 and then of 9% until maturity. In addition to the new bond, Mozambique made an up-front cash payment of almost USD40 million to bondholders.

The status of the two non-performing loans to companies initially set-up as state-owned-enterprises (SOEs), Proindicus S.A. and Mozambique Assets Management (MAM), remains uncertain. These loans were initially disbursed in 2013, purportedly with the benefit of separate state guarantees, but were not reported to the IMF or reflected in the government debt metrics until 2016. Since 2016, Proindicus and MAM have not made principal or interest payments due under their respective loans, which total USD1.2 billion (8% of GDP in 2018), and no such payments have been made or requested under the associated state guarantees. Mozambique is challenging the validity of the purported guarantee of the Proindicus loan in the English courts, while continuing its investigation of the MAM loan and the associated state guarantee.

Given the uncertainty surrounding these obligations and the outcome of ongoing proceedings, it is not clear at this stage whether any future restructuring of these loans would be consistent with a default event under Fitch’s sovereign rating criteria, as it is yet to be established whether the purported sovereign guarantees were unequivocal, irrevocable and unconditional.

Mozambique’s GGGD, excluding broader public sector domestic debt supported by the sovereign, remains high. GGGD is expected to rise to 101% in 2019 from 97% in 2018 owing to the higher principal of the new Eurobond, accumulated external payment arrears and an increasing level of domestic debt. We project GGGD to decline to 94% of GDP in 2020 and 89% in 2021 as an increase in official grant inflows will partially offset borrowing needs. Exchange-rate volatility is a key risk to debt sustainability as 85% of GGGD is denominated in foreign currency. The government is currently discussing possible restructuring solutions with some official bilateral creditors, but any such restructuring would be unlikely to constitute a default under our criteria.

The country’s liquidity and financing conditions remain tight. Financing needs, arising from the fiscal deficit (forecast to widen to 6.2% on a cash basis in 2019) and debt amortisation remain high at 9% on average over 2019-2021, partly owing to high reconstruction needs following the two cyclones that hit Mozambique in April. Foreign exchange reserve levels, which were already low, will decline further in 2019 to 2.3 months of current account payments and 2.1 months in 2021 from 3.5 months in 2018 given Mozambique’s high external financing needs.

Financing options are limited. In response to the cyclones, the IMF provided a Rapid Credit Facility of USD188.2 million, catalysing additional grants worth around 5% of GDP per year over 2019-2021, which will help contain the fiscal and current account deficits. However, the sovereign financing options are narrow given frozen budget support from official donors since 2016, limited access to international capital markets and a shallow domestic market.

The agreement of a medium-term policy conditioned programme with the IMF would ease financing conditions. Negotiations between the government and the IMF have reportedly made progress following the government’s efforts on the governance and public debt sustainability fronts but the authorities have not yet formally requested a programme.

The incumbent President was re-elected with 73% of the votes in the October 2019 presidential election. In addition, the ruling party FRELIMO won the parliamentary elections, with 184 seats out of 250, and will govern in all 10 provinces. The main opposition party Renamo appealed the election results, accusing the government of fraud and of using violence to intimidate voters during the election campaign, but is unlikely to be successful in court, even though the US and EU confirmed irregularities. These mounting tensions put at risk the implementation of the peace agreement, which both parties recently signed in a bid to resolve the on-going conflict that led to a civil war (1977-1992) and to violent flare-ups between 2013 and 2018.

In accordance with its rating criteria, for ratings of ‘CCC+’ and below, Fitch’s sovereign rating committee has not utilised the SRM and QO to explain the ratings, which are instead guided by the relevant ratings definitions for the CCC-D categories.

Fitch’s SRM is the agency’s proprietary multiple regression rating model that employs 18 variables based on three-year centred averages, including one year of forecasts, to produce a score equivalent to a LT FC IDR. Fitch’s QO is a forward-looking qualitative framework designed to allow for adjustment to the SRM output to assign the final rating, reflecting factors within our criteria that are not fully quantifiable and/or not fully reflected in the SRM.

The main factors that could, individually, or collectively, lead to a positive rating action include:

Mozambique has an ESG Relevance Score of 5 for Political Stability and Rights as World Bank Governance Indicators have the highest weight in Fitch’s SRM and are therefore highly relevant to the rating and are a key rating driver with a high weight.

Mozambique has an ESG Relevance Score of 5 for Rule of Law, Institutional and Regulatory Quality and Control of Corruption as World Bank Governance Indicators have the highest weight in the SRM and are therefore highly relevant to the rating and a key rating driver with a high weigh.

Mozambique has an ESG Relevance Score of 4 for Natural Disasters and Climate Change, which constitute a rating driver, as reflected by the macroeconomic impact of the two cyclones that hit Mozambique.

Mozambique has an ESG Relevance Score of 4 for Human Rights and Political Freedom as World Bank Indicators have the highest weight in Fitch’s SRM and are therefore relevant to the rating and are a rating driver.

Mozambique has an ESG Relevance Score of 4 for Creditor Rights as willingness to service and repay debt is relevant to the rating and is a rating driver as Mozambique just cured the default in 2019. 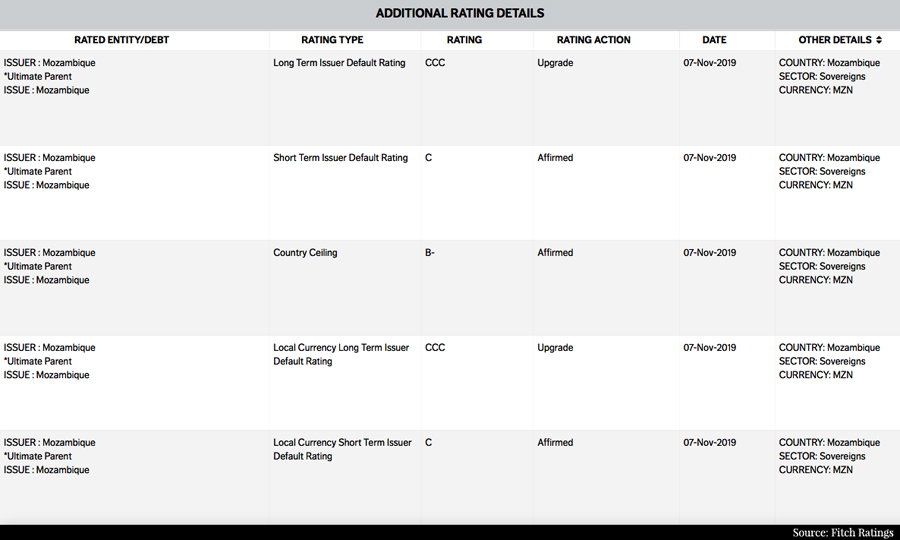 South Africa’s gets US$13.5B of investment pledges at summit

Fabio Scala is a director at BNI Bank in Mozambique, an institution he helped to create and served from 2010 to 2014. In his interval from BNI, he served in a UK family office for 5 years expanding its equity portfolio in Mozambique, Zimbabwe, Zambia and South Africa. He is also a board member of Uhusiano Capital, a boutique investment firm focused in impact investment projects in Southern Africa. Prior to his African experience, Fabio has worked in the US, Portugal and Brazil where he started his career at Caixa Economica Federal - the country’s largest state bank.

Mozambique: ‘Valuation of the metical only useful if reflected on the economy’

Air France to resume flights to Liberia in 2020