The cheapest cities to live and work in South Africa

The analysis is based on over 140,000 job vacancies on the Adzuna website as well as additional data from property24 and statistics South Africa.

Johannesburg was crowned as the best place to live in South Africa based on the availability of job opportunities, average salary and house price affordability.

Since the average renter only spends about 19% on rent annually, Joburg is also a favourite among renters that are looking to buy into the best value for their money, Adzuna said.

“Johannesburg came in as one of the best places again this year, scoring points in all the right departments,” said Adzuna country manager Jesse Green.

“Obviously, these results can be tied back to the abundance of jobs on offer in the country’s economic capital. Even though cities like Polokwane and P.E are some of the most affordable for renters, higher salary offerings in major cities make destinations like Pretoria equally as affordable.” 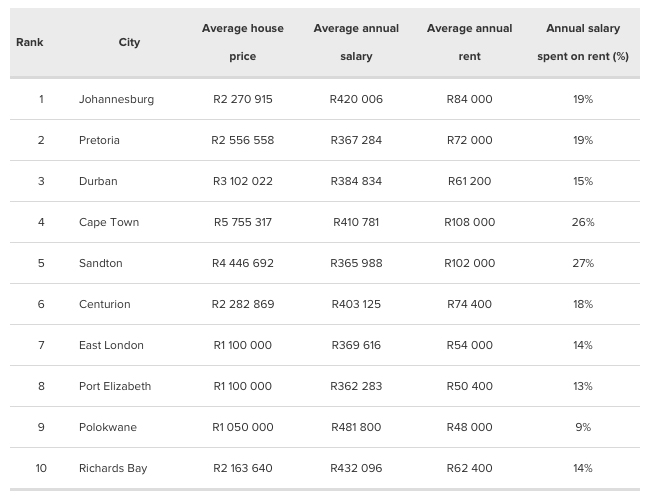 While Johannesburg ranked highly in a number of areas, Adzuna’s data shows that the best value city for renters in South Africa is Polokwane.

Employees in the city spend a mere 9% of their annual salaries on rent, but the low rental figures here have a serious flip side: crippling figures of available job opportunities.

Even though Polokwane has low rental and house purchase prices, there are roughly 446 people per job in the area based on Adzuna listings)

Polokwane’s results may also be affected by the mining and technical industries in the area, with higher than average salaries posted online.