In less than a couple of weeks we will be assisting to the kick-off of the 17th edition of the “Sauti za busara” festival, one of the most attractive music festivals within the entire East African region and surely one of the things to put in your bucket list, when visiting Tanzania.

Under the starry sky of Zanzibar, the Old Fort will host an intense four-day marathon with artists from all over the continent, plus African artists of first and second generation living abroad. Zanzibar & Tanzania mainland, Kenya, Burundi, Rwanda, Uganda, Morocco, Mali, Senegal, Algeria, Ghana, South Africa, Nigeria, Mauritius are just some of the more than fifty Countries represented by their own artists. 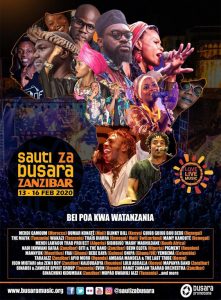 The “Sauti za Busara” peculiarity is also given by the capacity of mixing and showcasing various and different styles. Don’t lose the opportunity of being enchanted by the traditional Zanzibarian taarab (a blend of local Swahili poetry and music with Arabic, Indian and Western influence), or to dance at the rhythm of a modern bongo flavor or to be fascinated by the incredible voice and fusion style of artists like Thaïs Diarra, a wonderful melting-pot of roots and influences.

The live concert is the tireless result of one entire year of work, behind which there are the incredible efforts of Busara Promotion, a non-profit organization genuinely believing in the growth and professionalization of the artistic sector in Tanzania. The festival is just the final event of many other important activities such as small concerts, training workshops, meetings and tours.

The creative industry in Tanzania, despite being still highly informal and with few or no guidelines and policies at national level, gives employment to a huge number of youths annually and it could become an important source of the national income and tax revenues, if properly managed.

Moreover, artistic events, such as “Sauti za Busara”, contribute to promote Zanzibar and Tanzania in general as cultural-touristic destinations worldwide. The link between tourism and creative industries is strong and – if properly enforced – could also lead to a multiplying positive effect for a Country that has a lot to offer in terms of natural magnificence, culture and traditions.

I am a genuine, real southern Italian lady. After six years as internal auditor, I left the world of corporate to search for my life purpose. In 2010 I arrived in Tanzania for the first time: it was supposed to be a sabbatical year, but I decided to remain to invest my skills side by side with social enterprises, local artisans and women entrepreneurs. I am a happy and busy mother of two and founder of WanaWAKE-UP!, through which I support social enterprises and artisans businesses to expand their presence into the global markets. I am a huge supporter of women's sisterhood and I strongly believe in the great potentiality of women for the Tanzanian (and not only!) economic growth.

South Africa’s mining and mineral export industries have played a key role in driving an economic recovery following the onset...

Join 100,335 other subscribers.
No Result
View All Result