Chancellor of the Federal Republic of Germany, Angela Merkel, will be attending the 8th Angolan-German Economic Forum, to be held today at the Epic Sana Hotel, in Luanda. The chancellor has a speech scheduled at 15:45 local time, where she is expected to reaffirm Germany’s confidence in Angola’s recent developments, under President João Lourenço.

Merkel’s arrival comes at the tail-end of an official visit that started in South Africa, and might just be her last official visit to the African continent as Head of State. This last stop at Angola comes at a time when the relationship between both countries seem to be making great strides.

During the event – and according to Germany’s government official press release – “the programme includes the opening of a German-Angolan economic forum and the signing of several cooperation agreements and treaties”, adding that “The visit to Angola will focus on issues related to bilateral political and economic relations. It will also be about Angola’s constructive role in regional cooperation and support for the government’s reform course, in particular the fight against corruption”. 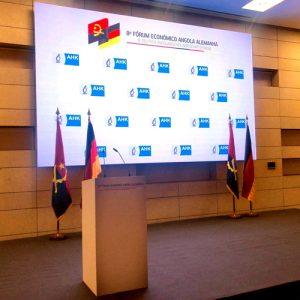 The Forum is being organized by the German Economic Delegation in Angola (AHK), which is part of a global network of over 140 Chambers of Commerce, in 92 countries. Since its opening, in 2010, AHK has served as one of the prime contacts favouring the economic relations between Angola and Germany.

Vandré Spellmeier, the Delegate of German Industry and Commerce in Angola, stated “We look forward to welcoming Bundeskanzlerin Dr. Angela Merkel in Angola on February 7 and we are excited to be talking about business and economy on the 8th German-Angolan Economic Forum. Our goal for the forum is to foster new business and investment opportunities in Angola for German companies, as well as to connect locally established companies with potential German partners.”

As of recent years, Germany’s investment in Angola has decreased; this official visit, then, can only be interpreted as a ways of breaking new ground and establishing new, strategical deals for both parties, as Angola regains some of its good image back, and Germany becomes yet another major example of how Europe regards Africa with an eye to the future.

A grant agreement has been signed by the African Union Commission (AUC) and the African Development Bank to carry out...

Join 100,051 other subscribers.
No Result
View All Result