South Africa’s rising country risk is putting upward pressure on interest rates, even as inflation expectations decline, with credit-rating companies contributing to the negative sentiment, according to the central bank.

Moody’s Investors Service cut its 2020 economic growth forecast for South Africa to 0.7% from 1% on Monday and said the nation’s relatively high real interest rates are constraining expansion. The ratings company is the only major one that considers South Africa’s debt investment grade, but that assessment is at risk after it changed its outlook to negative in November. Credit-default swaps already price South Africa at junk.

“South African quite clearly has serious growth challenges, but these go quite far beyond monetary policy,” Chris Loewald, head of economic policy development and research at the central bank and a member of the monetary policy committee, told lawmakers in Cape Town on Tuesday. “The higher South African premium creates upside pressure on the rates that is very hard to ignore. If we can continue to get lower inflation and keep it well behaved and de-risk the economy, that definitely creates more monetary policy space.”

Moody’s comments on Monday could be read to suggest there is room to cut rates, but more likely referenced “the frustratingly slow pace of reforms needed to unlock South Africa’s growth,” said Henrik Gullberg, a macro strategist at Coex Partners in London.

“If broader risk sentiment is supportive, rate cuts could even be rand-supportive as it would underpin growth prospects and capital inflows,” Gullberg said.

The inflation-targeting central bank has often drawn criticism from politicians and labor unions who say it should do more to bolster an economy stuck in its longest downward cycle since at least 1945 and reduce unemployment that’s at 29%. While the MPC cut its key interest rate by 25 basis points in January, the real rate, which adjusts for price growth, remains above 2%. 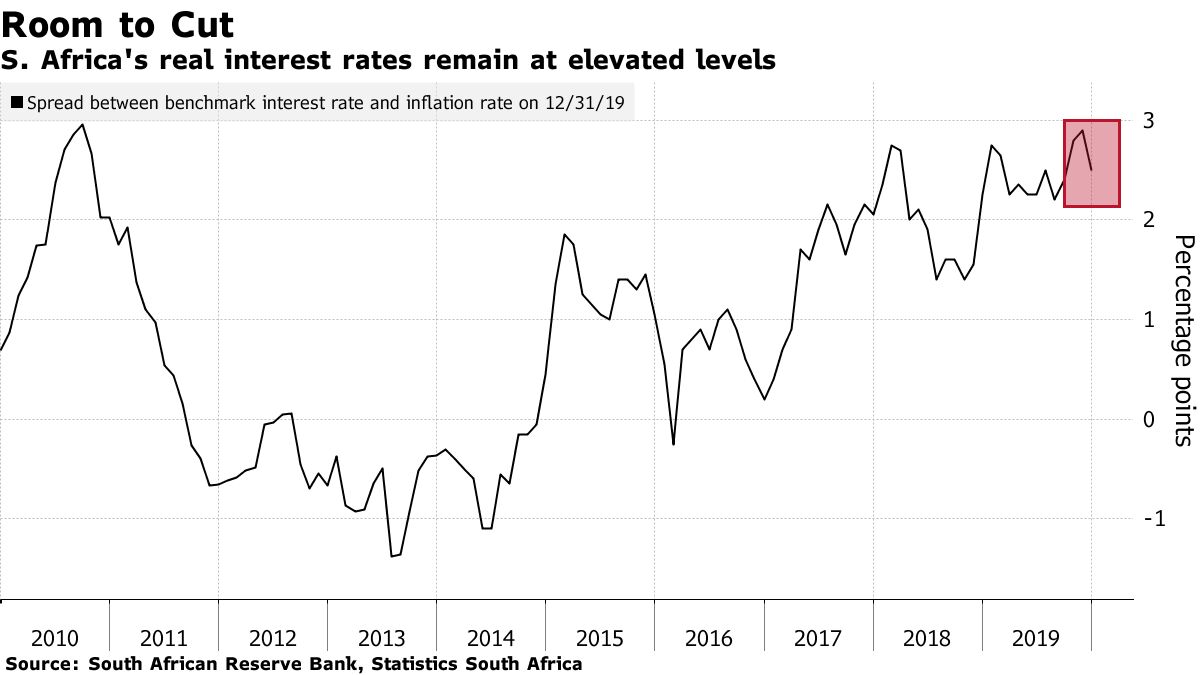 While real interest rates are high relative to South Africa’s emerging market peers, the central bank’s approach to its key rate has been sensible due to the risks associated with deteriorating public finances, according to Gina Schoeman, an economist at Citigroup South Africa.

A cautious approach by the MPC in a country where fiscal risk is high, “is the more responsible approach,” she said. “They’re still providing a cushion for the country to fall back on.”

Citigroup forecasts two more interest-rate cuts of 25 basis points this year, but said the MPC is unlikely to cut too fast. The panel will want to signal that it is “reluctant but willing” to lower the benchmark rate only if inflation expectations and its price-risk perceptions allow, Schoeman said.

While a government report on Wednesday will probably show inflation quickened in January, it remains close to the 4.5% midpoint of the target range. South Africans are becoming accustomed to lower inflation and price-growth expectations are easing, Loewald said.

“The trajectory of inflation, the risk factors, feed into the way monetary policy is thought about,” he said. “We have achieved lower inflation and we have achieved policy credibility.”

Even so, Africa’s most-industrialized economy hasn’t expanded at more than 2% annually since 2013 and neither the central bank nor the National Treasury see it reaching that level by 2022. Power shortages have been a major constraint on growth and exports, while increasing levels of public debt and a large current-account deficit constitute serious risk factors, according to the central bank.

Investors and ratings companies will keep a close eye on Finance Minister Tito Mboweni’s budget presentation on Feb. 26 to see how the government plans to reign in the deficit and debt levels. Moody’s is scheduled to review South Africa’s Baa3 credit rating in March. The firm’s lead sovereign analyst for South Africa, Lucie Villa, said on Tuesday they could cut the rating if the nation can’t rein in spending, boost growth and improve tax compliance to stabilize debt.

“If it wasn’t for the Moody’s downgrade concern, they would’ve cut already,” Elize Kruger, an independent economist, said about the central bank.

Mozambique approved a new amendment to the Investment Law Regulation