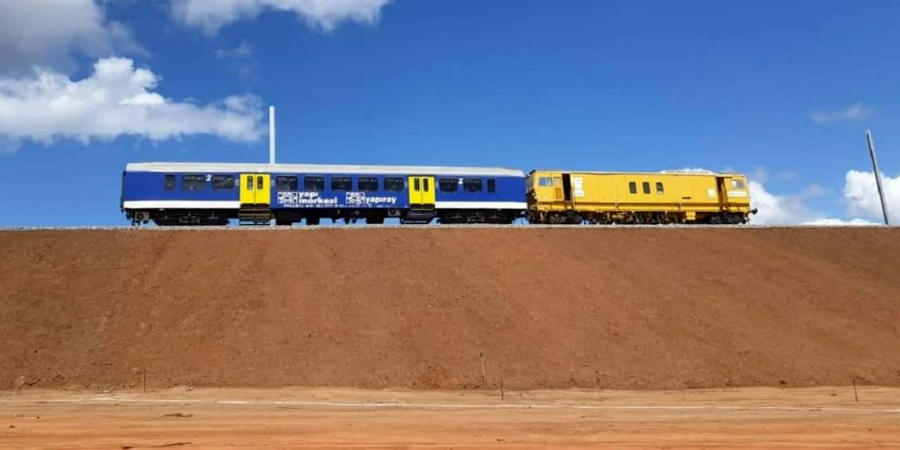 The railway will address current congestion challenges and decrease freight service charges by 40 per cent.

Tanzania’s Ministry of Finance has signed a facility agreement with Standard Chartered Tanzania for a US$ 1.46 billion term loan.

The financing is meant to fund the construction of the Standard Gauge Railway (SGR) project from Dar es Salaam to Makutupora.

At approximately 550 kilometres long, the SGR project is one of the country’s biggest projects connecting Dodoma to Dar es Salaam via Morogoro and Makutupora.

Once complete, the SGR Rail project will provide a safe and reliable means for efficiently transporting people and cargo to and from the Dar es Salaam Port.

According to the Tanzania Railways Corporation, it is expected that the railway will address current congestion challenges and decrease freight service charges by 40 per cent, as the railway will be able to haul up to 10,000 tonnes of freight, equivalent to 500 lorries, per trip.

It will also connect Tanzania to Burundi, Rwanda and the Democratic Republic of the Congo, DRC, thereby playing a key role in enhancing regional trade.

The development of the transport system in Tanzania deals a huge blow to Kenya’s Northern Transport Corridor whose success was pegged on its being the more affordable and efficient route for the landlocked East African countries.

This financing deal gives the multi-billion-dollar project a major boost with the first phase of the construction starting from Uvinza district in Kigoma region in northwestern Tanzania to Gitega.

It will proceed through the Msongati region in Burundi and then extend the DRC’s eastern regions.

With Kenya edged out of connecting the landlocked nations, the Tanzanian SGR will cover 1,457 km on completion. It will stretch from Dar es Salaam to Lake Victoria and as one of the mega infrastructure projects in Tanzania, is estimated to cost Tsh14 trillion (US$6.5 billion).

In 2018, Rwanda and Tanzania signed an agreement for the extension of the SGR line from Isaka to Kigali, a distance of 575km. To finance the project, Tanzania is paying US$1.3 billion and Rwanda US$1.2 billion.

Rwanda will solely cover the costs of extending the line to Rubavu which is a 221km stretch.

The arrangement between Tanzania and the partner nations in the SGR project deals a blow to East Africa’s economic hub which has been forced to terminate its SGR at Naivasha, an inland depot which is yet to attract business.

Standard Chartered Tanzania acted as Global Coordinator, Bookrunner and Mandated Lead Arranger on the facility agreement that is the largest foreign currency financing raised by the Ministry of Finance to date.

Tanzania’s Minister of Finance and Planning, Dr Philip Mpango, said the project financing will enable the project to be completed in good time as per the set plans and further increase direct employment in Tanzania.

The Development Bank of Southern Africa (DBSA), the Trade and Development Bank (TDB) and the African Export-Import Bank (Afrexim) are also supporting the project in partnership with Export Credit Agencies from Denmark and Sweden.

Tanzania will subject the SGR to its first formal testing in May. This is after the completion of the construction of the first phase in April.

The SGR project manager Machibya Masanja said the test will last for three months prior to the railway’s official inauguration.

Due to the drilling works for a tunnel near Morogoro and the building of bridges as well as the placement of culverts last year, the November deadline for completing the first phase was missed.

The phase covers 202km from Dar es Salaam to Morogoro and is now in its final stages.

Once the tests are complete, construction of the second phase of the 422 km SGR from Morogoro to Makutupora is expected to start.