South African business confidence slumped to a seven-month low in March even before the full impact of the coronavirus pandemic and the country losing its last investment-grade credit rating was transmitted through the economy.

A sentiment index compiled by the South African Chamber of Commerce and Industry fell to 89.9 from 92.7 in the previous month, the business group said in an emailed statement Wednesday.

That’s the lowest number since August, when weak economic growth and rising unemployment provoked a wave of xenophobic violence and prompted warnings from business groups and analysts that the country may be forced to seek assistance from the International Monetary Fund. The median estimate of three economists in a Bloomberg survey was 85. 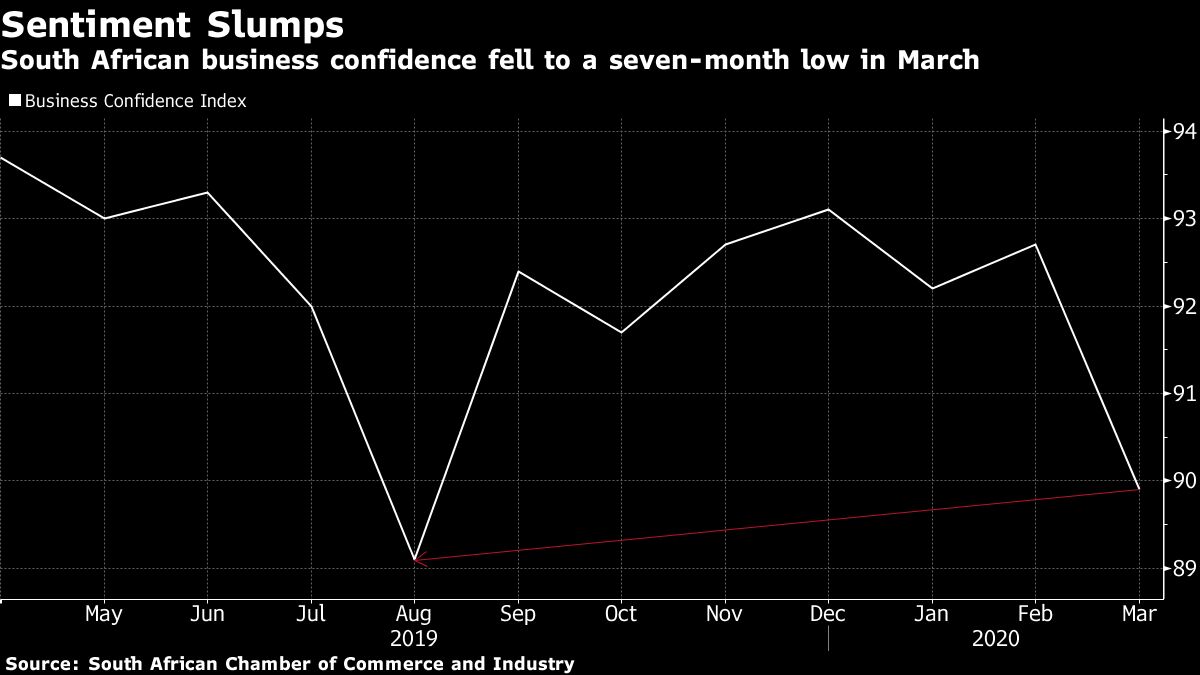 The economy has since slumped into a recession and could contract as much as 4% this year as a 21-day nationwide lockdown aimed at slowing the spread of the pandemic weighs on output, according to the Reserve Bank. Moody’s Investors Service cut the country’s debt to junk on March 27 and Fitch Ratings lowered its assessment deeper into sub-investment grade a week later.

The latest business confidence number therefore does not yet fully reveal the extent of COVID-19 on the economy and the business climate, Sacci said.

It “mainly contains the effect of the subdued performance of the domestic economy and to some measure the effect on international trade owing to the impact of the virus on trading partners.”

While Finance Minister Tito Mboweni has said the government could consider approaching the IMF for assistance to fight the pandemic, senior officials in the ruling African National Congress and its alliance partners rejected that, saying it could undermine the nation’s sovereignty.

“Extraordinary steps and sacrifices by government, business and households will be necessary over the short term,” the business chamber said. “The long-term effects are not clear, but all efforts should be put in place not to create fear and panic and to put sound economic policy in place to ensure sustainable economic performance post COVID-19.”

The junk rating by Moody’s highlights the need for the country to implement structural reforms once the effect of the virus subsides, Sacci said.

$379M from World Bank for data and statistics in West Africa

$379M from World Bank for data and statistics in West Africa

Zimbabwe has all ingredients for growth - IMF