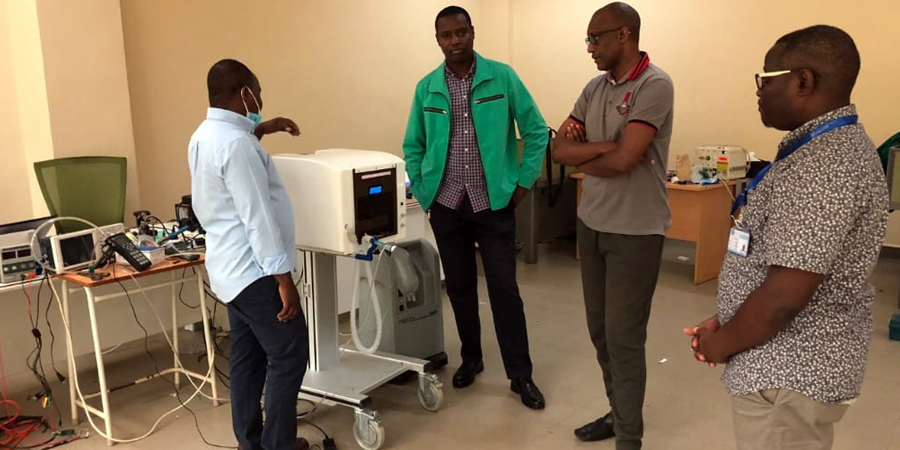 One of the Engineers, Costica Uwitonze, is optimistic if supported as soon as possible, the team can kick off production of the device to save people’s lives.

A prototype has been unveiled and sources say the ventilator will be released for use soon.

The team, carefully guided by Dr Stephen Rulisa, Professor of Obstetrics and Gynecology, School of Medicine and Pharmacy, University of Rwanda, and the Ministry of Health, says the prototype was produced in eight days.

According to Dr Rulisa, the Engineers have developed a ventilator that works exactly as the ones available on the market.

“The difference is that one is Made in Rwanda, others are imported,” he said. “They have made this one for demonstration in 8 days… when supported; they can do one even in 3 days.”

Dr Rulisa is convinced the team has all it takes for the job.

“We have the best brains in #Rwanda as anywhere else in the world… so let’s go!”

Similar ventilators, according to many suppliers, cost between $25,000 and $50,000. This is such a high cost tool that many poor countries cannot afford for available Intensive Care Units.

This is the same reason why most countries especially in Africa have Hospitals with few ICU beds.

For an ICU bed to be considered complete, it must have a ventilator too. Clinically, a ventilator is the patient’s last resort before God. Those who can’t breath and need facilitated breathing cannot survive without a ventilator.

Rwanda, like many other poor countries, has a few dozens of ICU beds and ventilators and the exact number has not yet been made public, but a source told Taarifa that the country has ordered for more pieces in response to COVID-19.

The development of ventilators by local engineers could potentially change the face of Rwanda’s medical infrastructure across the country.