There are early signs that rapid measures to contain the coronavirus are working in four African countries that have imposed the most stringent restrictions on the continent.

Lockdowns in Uganda and Mauritius are flattening the curve, with the number of new infections rising slowly. South Africa and Ghana have recorded new infections amid widespread testing but say they’re mitigating the spread of the disease.

“African countries have acted fast to contain the spread of this virus, and this has helped delay the course of the pandemic on the continent,” McKinsey & Co. said in a report.

There are now 25,131 cases on the continent of 1.2 billion people, a number the World Health Organization considers a fair reflection of the underlying trend. Nigeria, Africa’s most populous nation, has imposed strong containment measures in the commercial hub of Lagos and the capital, Abuja. Ethiopia, which ranks second in population, has declared a state of emergency without a strict lockdown.

“It’s important to put in place mitigation measures from the very beginning,” said Matshidiso Moeti, WHO regional director for Africa. “And in a number of countries, this is being done.”

South Africa’s response to the arrival of the coronavirus has kept the number of infections in check, and while it’s unlikely the country will escape a surge in cases, scientists advising the government believe they have bought valuable time that will allow hospitals to get prepared. A travel ban came into force 13 days after the first infection was confirmed on March 5, and a lockdown was imposed on March 27. It now has 3,465 cases. Almost 127,000 tests have been conducted out of a population of 59 million.

“The trajectory in South Africa is different from anywhere else,” said Salim Abdool Karim, chairman of the Ministerial Advisory Group on the outbreak, in a televised presentation. “We want to focus on the small flames so we never get to the raging flames.” 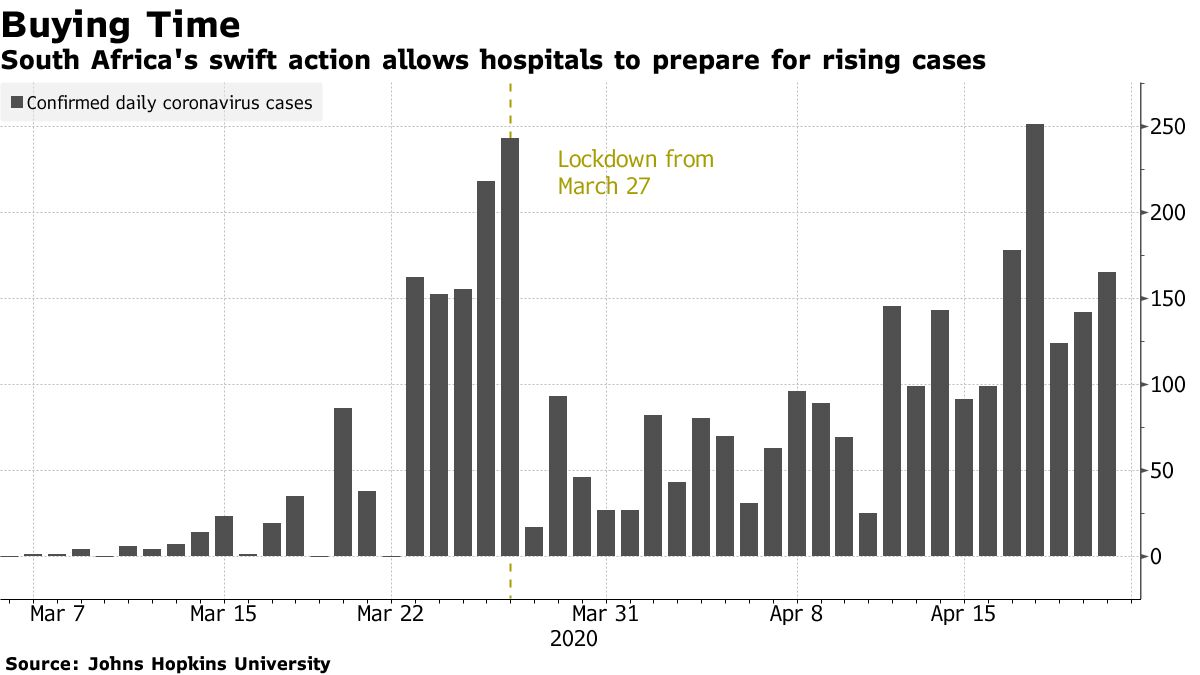 Ghana was the first in sub-Saharan Africa to ban travelers from high-risk countries, on March 15. As cases continued to rise, the government on March 30 put the main cities under lockdown and ramped up screening. The West African nation has tested more than 80,000 people so far, the highest number in the region after South Africa, out of a population of 30 million. Testing includes people who don’t show symptoms but are considered at risk.

With 1,024 confirmed cases, President Nana Akufo-Addo lifted the lockdown on Monday but warned it “does not mean we are out of the pandemic,” saying stringent social-distancing policies will remain in place. As of Wednesday, 1,154 people had tested positive.

Ghana’s presidential adviser on health, Anthony Nsiah-Asare, said at the start of the lockdown that the number of cases would climb.

“When we start testing a lot of people, you will realize that the figure of positives will likely go up,” he said. “There is no cause for alarm. It means we’re doing our work very well.” 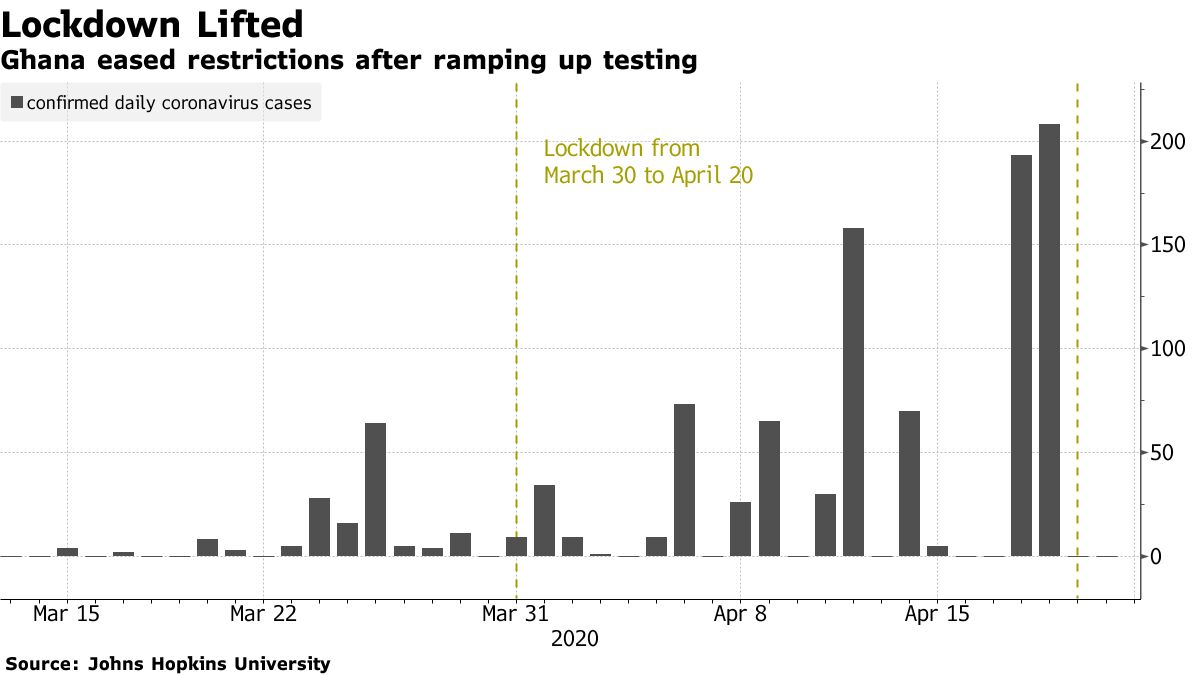 Uganda shut its borders and banned commercial flights from March 23, less than 48 hours after the East African country identified its first case. A 14-day lockdown ordered on March 30 has been extended to May 5. Uganda has 61 confirmed cases of the virus, including 45 recoveries, with a majority of people who tested positive having returned from abroad. More than 11,000 people have been tested.

“We shall defeat this virus by protecting our people from its rapid spread,” President Yoweri Museveni said last week. 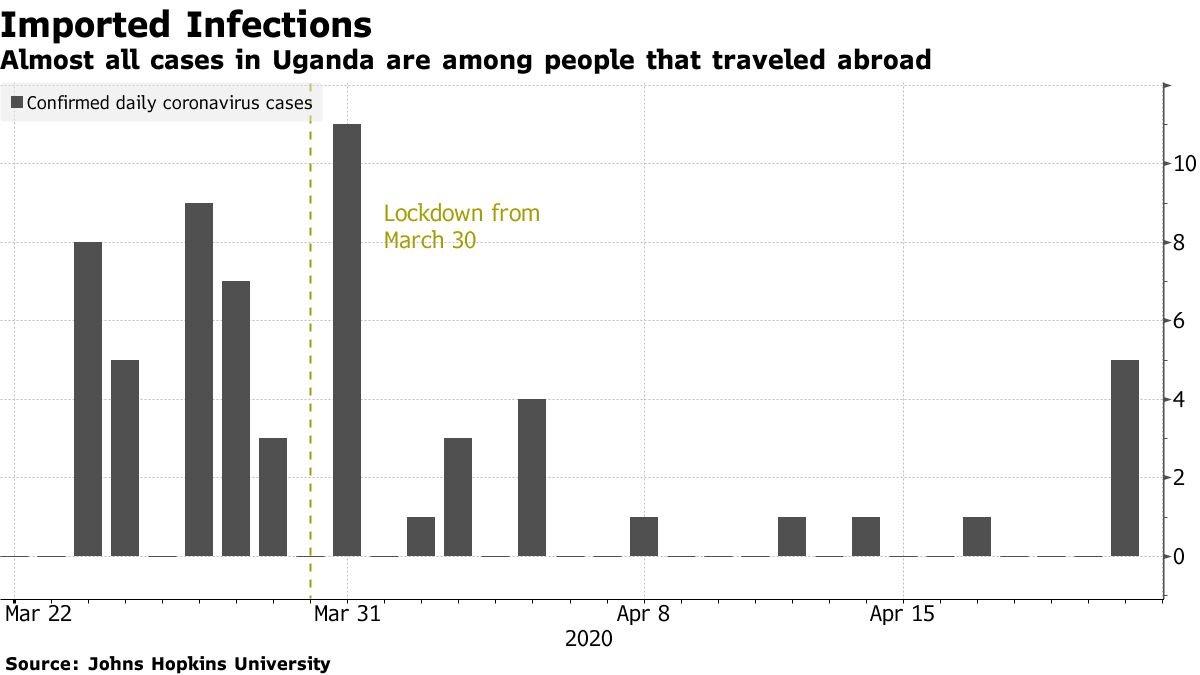 The Indian Ocean island nation of Mauritius confirmed its first three cases of the virus on March 18. A “sanitary lockdown” came into effect two days later, allowing banks, shops and supermarkets to continue operating. This was extended to a complete lockdown on March 25 that closed everything but essential services.

Supermarkets reopened on April 2, but people are only allowed to enter on specific days depending on their surnames and are limited to 30 minutes of shopping. The country has 329 cases, with more than 11,000 people tested out of a population of 1.27 million. 261 people have recovered. Prime Minister Pravind Jugnauth says the lockdown may be eased on May 4.

“We have achieved to keep our real infection figures well below figures given to us by prediction models,” the government said in an emailed response to questions. 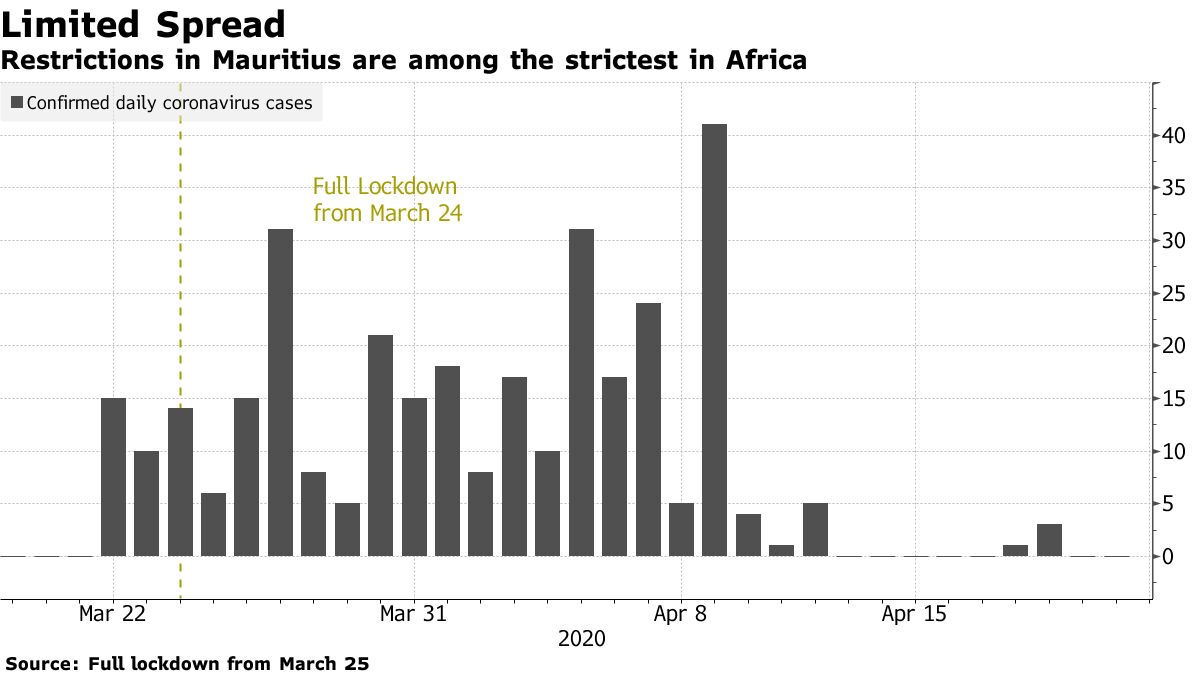 South Africa’s mining and mineral export industries have played a key role in driving an economic recovery following the onset...

Join 100,335 other subscribers.
No Result
View All Result