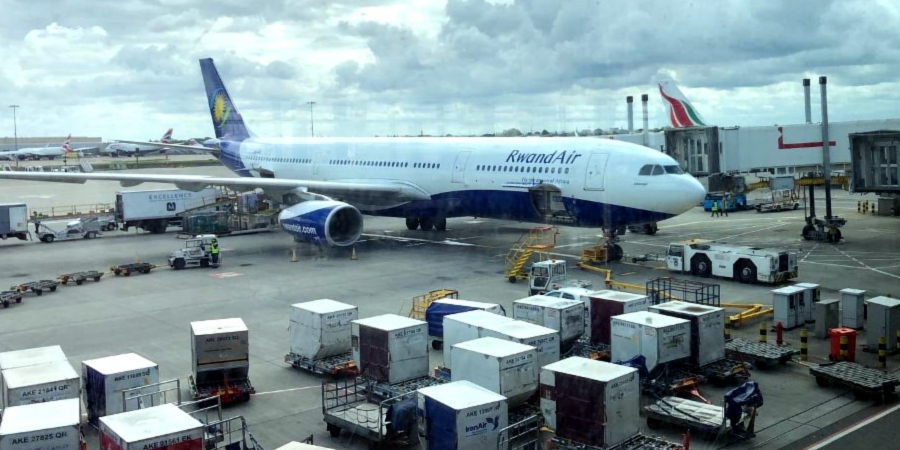 RwandAir has recently stepped up the hunt for cargo deals across the region and globe as the only way to survive the wrath of #Covid-19 which has forced grounding of airlines worldwide.

Over-reliance on passenger model has evidently hit hard the national carrier and is now thinking outside the box.

Those watching closely say that the new move is part of preparations of receiving yet another round of financial support from government according to a recovery plan seen by Taarifa.

Government says the newly created #Covid-19 economic recovery fund aims at, “supporting businesses in the sector hit hardest by the pandemic so that they can survive, resume work and safeguard employment”.

The planning documents states further; “targeted sectors are those highly impacted by restrictions put in place against the spread of #Covid-19 and exposed to consumer discretionary spending and those with global supply chains that are being disrupted”.

However, this document does not clearly indicate how much RwandAir will receive.

By estimated size of the recovery plan unveiled by the government of Rwanda set at over US$800M over next 2 years, it is anticipated that RwandAir as one of the hardest-hit businesses is bound to get a very substantial allocation made to it.

Aviation being a capital intensive sector, it only makes sense to allocate substantial resources to keep RwandAir a major strategic public investment afloat.

The support will also make it cushion the carrier to steadily reposition it for its medium strategic partnership with Qatar Airways.

Experts argue that regional carriers such as RwandAir in the post #Covid-19 pandemic scenario need to diversify their sources of revenue by cutting over reliance on passenger services.

This thinking sits very well with Rwanda’s overall strategy of boosting competitiveness of its products within regional and international markets while ensuring that its land locked economy transforms into a connected one to rest of the world.

Rwanda went into a 45-day total lockdown that effectively grounded its budding aviation sector in a bid to flatten the curve of the pandemic.

The sector is known to handle more than 800,000 passengers annually from its hub at Kigali International Airport. Policy makers singled it out as the primary importer and distributor of the virus into the country.

Experts in the sector say that the #Covid-19 pandemic has exposed the weak points of Africa’s aviation sector. Practically, all operators in Africa RwandAir included are currently experiencing severe financial difficulties.

Prior to the pandemic, RwandaAir with plans of emerging as a leading regional player was meant to get into execution stage as part of a Rwanda- Qatar US$1.3B deal.

However, in the current situation RwandAir with exception of big time player Ethiopian airlines and other carriers have found themselves lacking long haul cargo aircraft.

In the short term, RwandAir’s prospects of venturing more aggressively into cargo business will be hampered by its inability to conduct serious freight business at the moment due to lack long range cargo aircraft.

The only choice open for RwandAir is for it to resort to using its passenger planes into freighters.

“The cost of using a passenger aircraft is higher than a freighter because of too much wasted space as the cargoes are placed on the seats,” an expert says.

“However it is far much better than packing the planes in the tarmac,” he says.

In the post #Covid-19 scenario, cargo business will become more viable since only a handful of carriers in East Africa will be able to get into it.

Therefore when the Rwanda-Qatar deal is executed, RwandAir will indulge more into long haul cargo planes. By this adjustment, the carrier can reinvent itself in the African aviation sector.

Under terms of Rwanda-Qatar deal , reports say that Qatar Airways will operate some of its flights from Kigali with objective being to save the carrier operational costs.

If that happens then the regional aviation sector dynamics will change drastically especially in terms of cost reduction to end clients as Qatar Airways is highly subsidised. Other unconfirmed reports claim there is more at play than meets the eye in the Rwanda-Qatar deal.

In the post #Covid-19 scenario RwandAir is struggling to stay afloat but will need a financially muscled partner and Qatar Airways might be handy.

Qatar is believed to have paid US$780M for the deal, with most of the funds going to the initial construction and first years of operation of the new airport at Bugesera.

The balance of US$520M is believed to be available for funding requirements of operations including a possible bail out of RwandAir.

According to aviation experts flag carriers such as RwandAir can readily bank on cargo business, which generates about U$102 million annually. This is type of cash can keep these carriers going.

At the moment aviation experts say that using passenger aircraft ensures that carriers are able to evacuate 40 tonnes of cargo on a one-way trip with very minimal cargo on return leg.

This is what RwandAir is doing at the moment with the cargo deals it is executing such as the recent transporting of goods from Rwanda and Tanzania to Europe or lifting of Chinese goods to Rwanda.

On other hand factory-made freight planes are known to have the capacity to move approximately 100 tonnes.

Such specialised planes enable carriers that buy them to have economies of scale making it viable for long haul cargo business.

It’s not just RwandAir that is caught in the current mess. All other major airlines have also deployed their passenger aircraft to ferry cargo across the world.