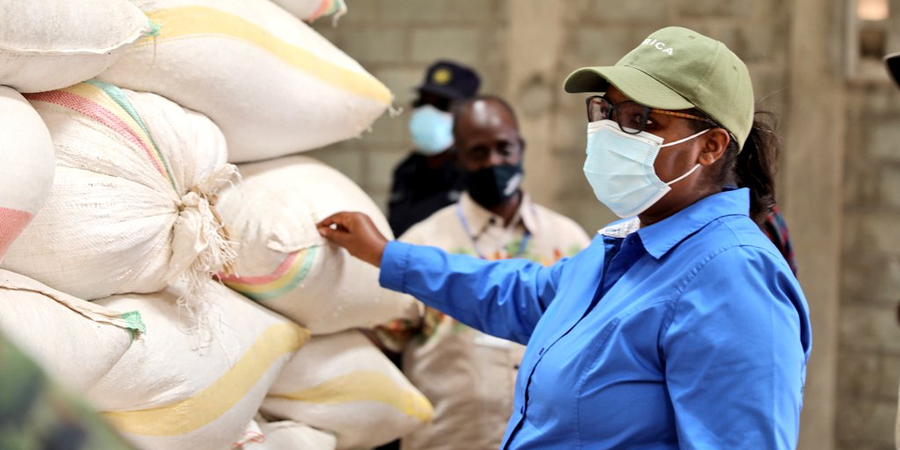 Agriculture Minister Gerardine Mukeshimana has concluded her tour of Eastern Province districts of Nyagatare and Gatsibo where she has been assessing the status of Agriculture production.

The two districts are known for their high yields of grain, livestock and bananas. They also embrace modern farming practices such as irrigation.

The Minister accompanied by the Governor of Eastern Province Fred Mufulukye was given a guided tour of a maize grain processing plant ‘Vision Storage Facility’ that has capacity to dry 50 tons of maize grain in only 3 hours and stores a total of 4500 tons of grain.

With the devastating effects of Covid-19, Rwanda’s economy has completely grounded but government has released a recovery plan aimed at getting the economy back to its feet. Its implementation starts May up to the end of December in the first phase (2020).

The Rwf 800B plan includes two-parts, first part consists of: Monetary Policy, Fiscal Policy and interventions in specific sectors such as Agriculture, support to Private sector, Infrastructure projects for growth and jobs, Technology and Innovation plus Mining.

“As we adopt the recovery plan, we want to address issues of social protection, agriculture. We need to improve productivity, and food security,” said Uzziel Ndagijimana-Minister for Finance and Economic Planning.

Before Covid-19 hit Rwanda, the government had entered into a joint venture with Netafim, an Israeli irrigation technology firm, for the development of the Gabiro Agribusiness Hub Project (GAHP).

This joint deal aimed at creating a holistic and commercial agricultural ecosystem by developing modern value chain over an area of approximately 15,600 hectares of arable land with advanced water infrastructure, cutting-edge irrigation systems, high-value agro-processing operations and other agricultural technology activities across the value chain.

According to this deal, US$66.5M was spent on the first phase covering 18 months since March last year to develop 5,600 hectares.