Electric vehicles are starting to buoy the global Metals Market

The market gloom over the metals that will power the cars of the future is starting to lift.

Supply overhangs and then the coronavirus pandemic had crushed short-term prospects for the minerals used to make rechargeable batteries. But new government commitments to green transport in China and Europe, as well as curtailments to mining and future investments, have led to a growing consensus the markets are bottoming out.

Add in the fact that battery technologies are continuing to get cheaper, and there’s reason to be bullish “over the next few years once we get through the current predicament,” said Chris Berry, president of House Mountain Partners, an industry consultant.

“The European Union, in particular, is essentially rebuilding their automotive supply chains around battery metals, and incentivizing EV adoption,” Berry said in a phone interview. “The Chinese have re-instituted the EV subsidy regime as well.”

Exuberance about the future for electric-powered vehicles led to an oversupply of metals such as lithium and cobalt, sending prices tumbling by more than half from their 2018 peaks. Then just as some optimism was returning to the markets, the coronavirus pandemic triggered a demand slowdown that clouded recovery prospects for those metals as well as nickel.

While shorter-term forecasts have been reduced, the longer-range outlook remains impressive. BloombergNEF predicts global electric-vehicle sales will return to growth over the next few years, rising from 2 million last year to 8.5 million by 2025, then climb to about 26 million by 2030.

The worldwide market for cathode for lithium-ion batteries, the most common type in rechargeable cars, is expected to reach US$58.8B by 2024 from US$7B in 2018, according to a United Nations report.

Those outlooks leave the world’s largest producer of lithium expecting a market turnaround by 2022.

Demand “is starting to come back” with spot prices about at a bottom now, Albemarle Corp.’s new chief executive officer Kent Masters said in an interview. “It will ramp up and use up that excess supply. And in time, there’ll be a play where demand outstrips supply and pricing will change dramatically.”

For lithium, delays of new and expansion projects will help the supply glut. With only a few producers making money at these levels, “you’re starting to see less production of lithium — a complete contraction of the production of it,” said Andrew Bowering, a director at explorer American Lithium Corp. “New projects that were scheduled to come on are not coming on, and there’s going to be a supply crunch of lithium some time within the next couple of years.”

Citigroup analysts now expect battery-grade lithium prices to surge by about 42% in 2022 from current levels thanks to “rising conviction” on electric-vehicle demand from new Chinese and European EV incentives as well as accelerating rationalization in supply. 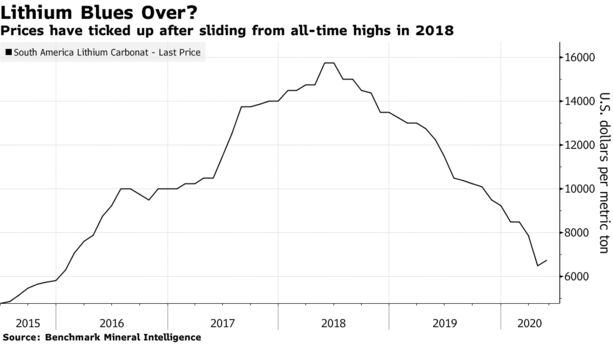 Cobalt faces similar supply constraints in top producer Democratic Republic of Congo due to the pandemic, on top of the shutdown of Glencore Plc’s Mutanda copper and cobalt mine late last year. Mutanda was responsible for a fifth of global cobalt production in 2018, according to Darton Commodities.

Cobalt also faces uncertainty surrounding its future as a key EV material given its concentration in DRC, where artisanal mining is associated with human-rights issues, including child labor. Tesla Inc.’s much-anticipated approval of a cobalt-free battery for some lower-range vehicles in China shows the options automakers have, according to BMO Capital Markets analyst Colin Hamilton.

In the market for battery-grade nickel, BloombergNEF analyst Allan Ray Restauro expects a tight balance in the next two to three years as demand from lithium-ion batteries picks up. He says there may be a significant deficit as early as 2023 when nickel prices start to recover.

Government incentives have eased some of the sting from the pandemic’s hit to demand. Despite the oil-price slump that rocked the nascent EV industry, China’s government is doubling down on its push into electric vehicles with a range of support measures. Germany’s €130B (US$146B) recovery budget allocates about €41B to areas like public transport, electric vehicles and renewable energy. France announced its own €8B stimulus package for the auto industry, focusing heavily on the domestic EV supply chain.

“The outlook for battery demand is not as bad as some were expecting at the height of the global outbreak,” Andrew Miller, product director at industry adviser Benchmark Mineral Intelligence, said by email. “Signals are that stimulus efforts will be focused on the shift toward clean energy and electrification in many parts of the world, which is strengthening the medium-long term outlook for demand.”

To be sure, no one knows how quickly the world is going to emerge from the Covid-19 pandemic. Plus, it’s hard to predict right now whether consumers will buy electric vehicles even with government incentives, said Albemarle’s Masters, who took over as CEO in April.

But one thing is far more certain, and reassuring, he said: “The lithium industry will recover as the EV sales recover.”

The U.S. Department of State, Office of the Special Envoy for Global Food Security, in partnership with the African Union...