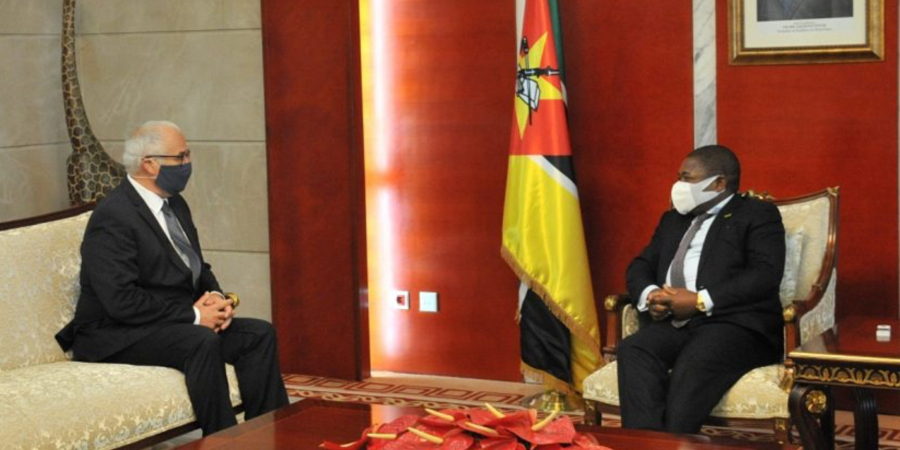 Germany is donating €15M to support the establishment of a special Covid-19 prevention programme in Mozambique, outgoing Ambassador Detlev Wolter announced yesterday after presenting his farewells to President Filipe Nyusi.

Ambassador Wolter said he had discussed the coronavirus pandemic with the Head of State, and Germany had offered the disbursement mentioned, as well as substantially increasing support for Cabo Delgado through the World Food Program.

The German ambassador called the meeting with the president an honour, and mentioned that the relations of friendship between the two countries had been praised during the meeting.

“It was a great pleasure to represent Germany in this country, as our relations have an increasing tendency and the possibility of expanding into other areas, especially at this time, when Germany presides over the European Union,” the diplomat said.

President Nyusi also met the Ambassador of Japan to Mozambique, Kimura Hajime, in a first courtesy meeting, and assessed the prevailing level of bilateral cooperation.

Speaking to the press after the hearing, the Japanese ambassador, Kimura Hajime, said that the meeting with President Nyusi had been intended to exchange views on relations of bilateral cooperation between Mozambique and Japan in the field of health, especially regarding the Covid-19 pandemic, as well as in other areas.

“In this context, we announce support of US$100M to help service the external debt of developing countries, including Mozambique, which will be managed through the IMF. This amount will alleviate the foreign debt of these countries, which relief can be passed on to combat Covid-19,” Ambassador Hajime said.

The Japanese diplomat added that his country would also offer hospital supplies to help fight Covid-19, with the emphasis on ambulances and intensive care equipment.

Source: Rádio Moçambique / Presidency of the Republic via Club of Mozambique