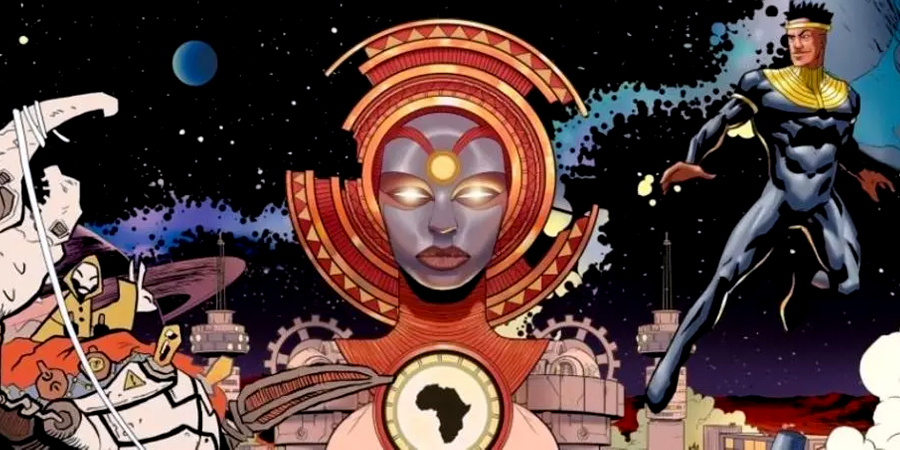 The work of 16 comic artists from seven African nations is showcased in an online-only exhibition, Afropolitan Comics. The French initiative, which germinated in South Africa, aims to show “what Africans can do”, the curators say.

‘Afropolitan’ is an amalgam of the words ‘Africa’ and ‘cosmopolitan’ in a reminder of the modernity and diversity that exists across the African continent.

“We wanted to break away from the clichés and stereotypes about Africans. Also, inform people that comic authors in Africa do not just work on biographies or make fun of politicians,” says Joëlle Epée Mandengue, one of the four curators of the exhibition.

The online event is free to access and will be available, with Africa 2020, until July 2021.

Pan-African focus
According to Epée Mandengue, it is the first time that an exhibition of African comics was conceived to be shared on a digital platform only.

Also read: Weekend: My favourite Namibian voice is back – With Love

“The comics museum in France is the best partner for this type of exhibition as it is quite unique in this field with a solid reputation both in France and internationally,” explains Selen Daver, the cultural attaché at the French Embassy in South Africa.

Last year’s Art of Comics exhibition in Johannesburg focused on South African comics and graphic novels with a special section on the rich tradition of French comics. It aimed to reveal “common threads that tie France and South Africa together” in heroic fantasy, science fiction, history and other genres.

“We realised, last year, that there were no Africans among the Francophone comic artists in the exhibition. This is why we felt it was very important, this time, to create bridges and actually engage a conversation between Anglophone and Francophone Africans,” Daver told RFI.

The “huge success” of The Art of Comics encouraged the French Institute to continue working on comics but, Covid oblige, the 2020 edition became all digital.

Interconnected African comic artists
The 16 artists – eight from South Africa and eight from six other African nations – were chosen because of their similarities, “either in the way they draw or the themes they explore”.

Having spent the last four years organising the Bilili International Comics Festival in the Republic of the Congo, Epée Mandengue has a solid overview of what is being done on the comics scene in Africa and is in a position to see what the various authors may have in common.

“Even if they don’t know each other, you can see they sort of mirror each other’s work as if they are pursuing the same conversation. And this is why this exhibition is also called ‘images in conversation’,” the Brazzaville-based curator told RFI.

This idea of ‘mirror effect’ is reflected in the lay out of the exhibition’s website: on the left-hand side, there is the work of a South African artist and on the right-hand side, his counterpart from the rest of the continent, as if they are talking to each other, sharing experiences.

“You can be in Senegal, speaking Woloff, in Côte d’Ivoire, speaking French or in Zimbabwe, speaking English but with comics we overcome the language barrier,” adds Epée Mandengue.

The four curators chose to divide the exhibition into three themes: Autobiography, Heroes and History, Folklore and the Future.

“The exhibition shows that we are interconnected even though we live afar and we have different cultural backgrounds,” Epée Mandengue said.

She says that each comic artist has a specific way of approaching a theme. For example, the story of Shaka – the Zulu warrior prince – is told from a South African perspective by Luke Molver while the Ivorian artist Koffi Roger N’guessan offers a different approach.