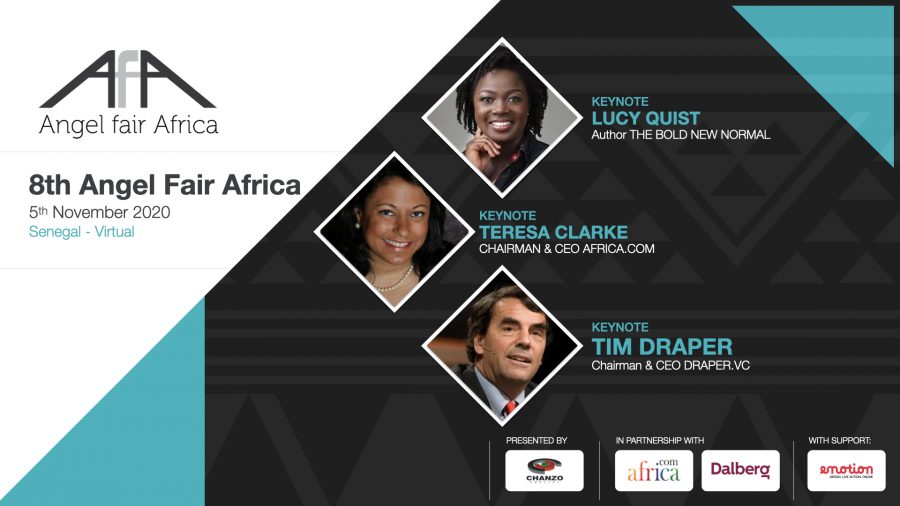 Chanzo Capital, in partnership with Africa.com has announced the 8th Angel Fair Africa, which was originally scheduled to be held in Senegal. Angel Fair Africa chose Senegal for the dynamism of its entrepreneurial ecosystem. The objective is to showcase Dakar as the francophone hub for investors, entrepreneurs and Entrepreneur Support Organizations while facilitating cross-border deals.

The “new normal” we are currently living in, however, has brought about several changes, among which, virtual events and webinars aplenty, in order to connect people around the globe, during times of social distancing. In this spirit, the theme of this year’s event is “doing deals in a virtual environment”, and it will take place on November 5th, 2020, on the www.virtualconferenceafrica.com platform.

For this year’s edition, the novelty will be the Africa Virtual Accelerator (AVA), which will replace the physical bootcamp which prepares the entrepreneurs to be investor-ready. On 27th May 2020, Angel Fair Africa joined forces with Africa.com to host a virtual pitch competition at which six African startups pitched to judges who honoured three winners with cash prizes, mentoring sessions and media packages at virtualconferenceafrica.com/brilliant-african-innovations/. In an article written here on FurtherAfrica by the co-founder of Angel Fair Africa, Eric Osiakwan, he explained:

“Given the numerous innovations we were seeing, on May 27th, 2020, Andile and I partnered with Teresa Clarke of Africa.com to host the first Africa online pitch competition under the auspices of “Brilliant African Innovations Against COVID-19”.”

This year’s event will start with a keynote fireside chat with Lucy Quist, author of the book, “The Bold New Normal”. The conversation will centre on situating the bold new normal within the new normal of “virtuality” and how that can enable deal-making in Africa.

Teresa Clarke, Chairman and CEO of Africa.com will follow with a lunchtime keynote fireside chat on how she exemplified the bold new normal by leaving Goldman Sachs in New York, relocating to Johannesburg, South Africa to build Africa.com from the ground up into a media empire, which last year acquired iAfrica.

The day will end with Tim Draper sharing his bold new normal of investing globally from Silicon Valley into companies like Baidu, Tesla, Hotmail, Skype, etc which all redefined their industries.