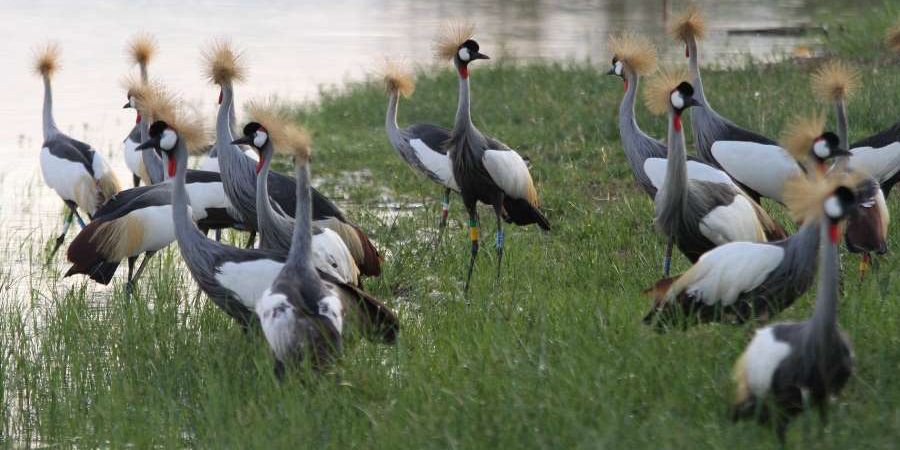 In precolonial Rwanda, the Crane had made its way to form part of the monarch seal.

The crested crane was for centuries an important symbol of pride, peace and longevity in Rwanda. In the old tales the crane is repeatedly narrated with attachment to majestic beauty.

In precolonial Rwanda, the Crane had made its way to form part of the monarch seal.

It majestically stood on the right while of the left the lion flashed its mane and pouncing paws holding tight onto the drum- the symbol of power of the absolute monarch.

The country has since 1962 turned into a republic.

Rwanda is home to the grey crowned crane with specifications of about 1 m (3.3 ft) tall, weighs 3.5 kg (7.7 lbs), and has a wingspan of 2 m (6.5 ft). Its body plumage is mainly grey. The wings are predominantly white, but contain feathers with a range of colours, with a distinctive black patch at the very top.

The head has a crown of stiff golden feathers. The sides of the face are white, and there is a bright red inflatable throat pouch. The bill is relatively short and grey, and the legs are black. They have long legs for wading through the grasses.

The feet are large, yet slender, adapted for balance rather than defence or grasping. The sexes are similar, although males tend to be slightly larger. Young birds are greyer than adults, with a feathered buff face.

The grey crowned crane has a breeding display involving dancing, bowing, and jumping. It has a booming call which involves inflation of the red gular sac. It also makes a honking sound quite different from the trumpeting of other crane species.

Both sexes dance, and immature birds join the adults. Dancing is an integral part of courtship, but also may be done at any time of the year. Flocks of 30–150 birds are not uncommon.

These cranes are omnivores, eating plants, seeds, grain, insects, frogs, worms, snakes, small fish and the eggs of aquatic animals. Stamping their feet as they walk, they flush out insects which are quickly caught and eaten.

The birds also associate with grazing herbivores, benefiting from the ability to grab prey items disturbed by antelopes and gazelles. They spend their entire day looking for food. At night, the crowned crane spends its time in the trees sleeping and resting.

For the past decades the crested crane has not been a bird of its precolonial status and has been competing with humans encroaching and depleting its natural habitat.

The bird had become a mere domestic trophy -316 captive Grey Crowned Cranes have been registered throughout Rwanda.

Government, launched a media campaign and amnesty, calling people to declare any captive cranes they had. All captive cranes in Rwanda have been registered, assessing the cranes’ health status and fitting them with a unique numbered leg band for easy future identification.