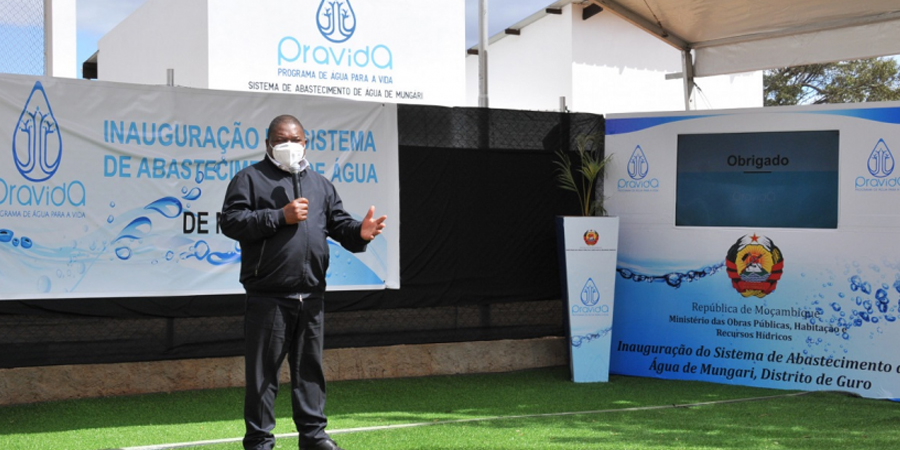 Mozambican President Filipe Nyusi inaugurated three water systems over the weekend in the districts of Macossa, Tambara and Guro in the central province of Manica.

The three systems will provide over 30,000 people with access to clean drinking water. They cost the Mozambican government 200 million meticais (about 2.8 million US dollars, at current exchange rates), under the “PRAVIDA” programme.

This programme is a government initiative, begun in October 2018, with the purpose of accelerating the construction of new water supply and sanitation systems. The three new systems inaugurated by the province increase the percentage of the Manica population with access to clean drinking water from 48 to 52 per cent.

“We are aware that we have not yet managed to being water to the entire population of the province, but we are increasingly encouraged, since gradually water is reaching the public”, Nyusi said in Nhacolo, the Tambara district capital.

He admitted that delays which might occur in water projects are due to the constraints faced by the government “since it is not always possible to do everything at the same time”.

“The water has to be brought in accordance with our capacities, and not all at the same time”, Nyusi said, “because we still have many other things to solve, such as schools, health centres and, later on, the district hospital. These are continual concerns and we, as a government, guarantee we are aware of what the people need at each moment, and we shall make a point of bringing the water bit by bit”.

The President noted that the districts in the north of Manica province had always faced water problems. Often, during presidential visits to this part of the country, “the great cry of the population was for water in the first place, because without water there is no life”.

“Today we are very pleased because with water available a lot of things will be solved”, he continued. “We will not only have water to drink, but hygiene will become much easier. The standard of living improves with water. We shall have fewer diseases, because we shall take precautions against them”.

In Nhacolo, Nyusi asked the managers of the water supply system to maintain the system carefully. “Our goal is to bring water as close as possible to our people”, he declared.