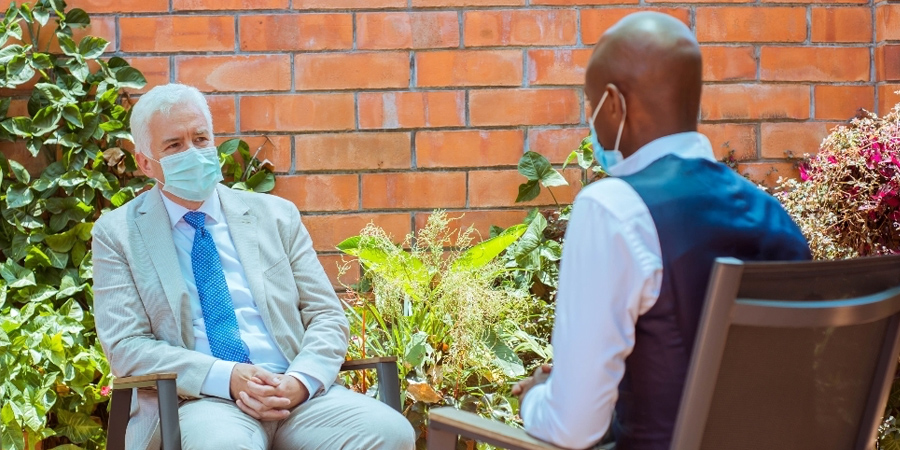 Dr Thomas Kurz, the Germany Ambassador to Rwanda, has already entered the second year since the beginning of his tour on September 2, 2019.

Taarifa Team held an exclusive interview with the envoy at the embassy in the Rwandan capital Kigali. Several issues were explored, ranging from diplomacy, politics, development cooperation and history. Ambassador Kurz explains that there is a long-standing relationship between Germany and Rwanda, dating back over a century ago when Rwanda was part of the German East Africa.

German was the first country to reopen its embassy and full-scale operations in 1994 after the genocide against the Tutsi that claimed over a million lives. In the political field, Germany’s interest is to have Rwanda as a strong partner for stability in the region, he said.

“Rwanda has difficult neighbours [it means mainly to the east]. They don’t have as much stability as Rwanda has reached and this influences security stability in Rwanda,” says Ambassador Kurz.

Considering Germany’s handling of the issue of hosting Rwandan fugitives wanted for genocide crimes back home, Dr Kurz says his country has strong judicial cooperation with Rwanda and, “the reason is that we do follow up cases of suspected genocidaires in Germany. In 2017, we extradited a suspect [Jean Twagiramungu] and is in Rwandan prison.”

“We have trialed and sentenced several others back in Germany. According to our constitution, we are not allowed to extradite German citizens,” Ambassador Kurz told Taarifa, adding that he was not aware of any international arrest warrant issued by Rwanda without German responding; “besides there are not many Rwandan fugitives in Germany except neighbouring countries.”

Meanwhile, as the Covid-19 pandemic has devastated the global economy including a substantial rollback effect on the Rwandan economy, this has prompted the German government to issue a grant funding of €10.7M with the aim of supporting the preservation of employment by SMEs in Rwanda against the effects of the pandemic.

“Both our countries have been dealing with this pandemic very well. Rwanda has a good reputation as the only country in Africa and sub-Saharan Africa that is not on the list of Covid-19 risk countries. We have been partnering even before the first COVID-19 infection. We provided the first testing kits and training,” says Dr Kurz.

According to the ambassador, a delegation from Germany’s Robert Koch Institute (RKI) is expected in Kigali this weekend to deepen this cooperation. This is Germany’s top institute for infectious diseases conducting research and development of vaccines. Earlier on Friday, Christian Drosten, a German virologist warned of an aggravated Covid-19 situation indicating that there were new infections.

Several other countries around the globe are being cautioned. “In some countries, we have noticed that infections are increasing including Germany. We see a danger that things may get out of control again. However, Rwanda is not experiencing this,” the ambassador cautioned.

This conversation also captured Rwanda’s energy deficit and the efforts in place to meet the country’s energy demands. Rwanda currently generates 226.7 MW of electricity from more than 40 power plants, mainly hydro. However, the energy capacity is still low compared to a required demand above 600MW.

“We have a Germany company building a dam to generate hydro energy. We are also working with Rwandan companies to produce environmental friendly clean energy,” the Ambassador explained.

Does Volkswagen investment in Rwanda present a strategic interest for Germany?…

“Volkswagen made its own choice that Rwanda was the right place to invest but It is our job to help German or European companies access this market,” the envoy said.

With a long historical relationship with Rwanda, why does German remain in the background?

“Back home there is an ongoing discussion on Germany’s responsibility and there are several initiatives already being implemented. For Rwanda, we have established the Kandt House Museum of Natural History. It is an obvious link of Germany to the colonial times here [in Rwanda],” he says, adding there are other projects through German development agency (GIZ) such as the Kandt trail.

It should be remembered that Richard Kandt was the first German colonial resident of Rwanda during the colonial era. The Kandt trail established last year aims at rediscovering the exploration tracks leading to different sites that mark important stages of Kandt’s life.
Ambassador Kurz also explains that his government is in talks with Rwanda on the issue of human remains.

“We are in talks with the Rwandan government on human remains. During the colonial period, people collected these human remains to conduct scientific studies. About 100 human remains have been identified in Germany to have originated from Rwanda especially on returning them to Rwanda.”

One of the lowest moments between the two countries resulted from an implementation of the 2006 arrest warrant for nine Rwandans. It had been issued by a French judge seeking to inquire about the downing of the Falcon50 jet in which former Rwandan President Juvenal Habyarimana was travelling. In 2008 when Rtd Rosa Kabuye, a Rwandan government official, was subsequently arrested in Germany, and relations between the two countries were strained. Both countries recalled their envoys but a year later relations were restored and new envoys posted back again on each country’s capitals.

“Circumstances at the time were totally different from the situation today. Diplomatic immunity only works for somebody accredited to a country. For example, as an ambassador, I have immunity in Rwanda but when travelling to Uganda on a diplomatic passport, I wouldn’t have such immunity. Only heads of state enjoy this immunity,” he explains.

However, at a time of her arrest, Rose Kabuye, a retired Lieutenant Colonel was serving in the capacity as chief of protocol for Rwanda’s President. German police arrested her in response to an indictment by a French judge about the 1994 attack on the plane of former Rwandan President Juvenal Habyarimana.

“We immediately sent a protest note (to the German embassy in Kigali) … we emphasized that Rose Kabuye holds a diplomatic passport … therefore the German government shouldn’t have arrested her,” the Rwandan foreign ministry said after Kabuye’s arrest.

Almost a decade later, Rwanda and German have excellent relations on economic, political, and social fronts. Ambassador Dr Kurz said after arriving in Kigali that, “shaping and intensifying the relationship between Germany and Rwanda is a great opportunity and challenge. I am excited to take up this assignment.

As of September last year, Rwanda Development Board (RDB) reported that it had registered 17 German investments (totalling above US$257M) with interests in a wide spectrum of sectors. Also, the German development cooperation between 2017-2020 is about €103M and, there will be virtual bilateral talks coming up in November on how to expedite further cooperation.