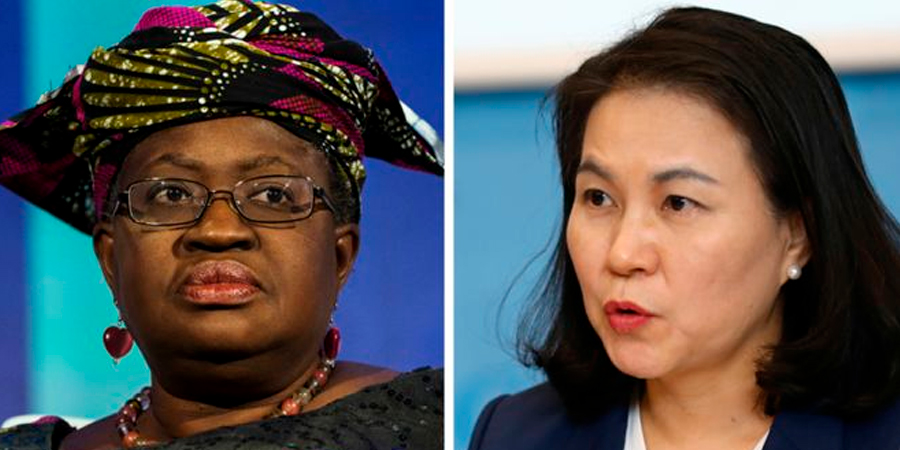 The World Trade Organization will be led by a woman for the first time in its 25-year history after two female candidates made it to the final round of selection to become the Geneva-based body’s director-general.

The winning candidate will replace Brazil’s Roberto Azevedo, who stepped down on Aug. 31, a year early.

THE CANDIDATES
Ngozi Okonjo-Iweala (Nigeria), 66, board chair of the global vaccine alliance Gavi.

Okonjo-Iweala, one of three women and two Africans to start the race, is an economist and development specialist who has served as Nigeria’s foreign minister and finance minister and as a managing director of the World Bank. Branding herself a “do-er”, she points to negotiating skills that she says helped seal a deal to cancel billions of dollars of Nigerian debt.

She told Reuters she has “strong support” from Africa and also that the WTO should play a role in helping poorer countries access COVID-19 drugs and vaccines.

South Korea’s first female trade minister is pitching herself as an experienced minister overseeing trade in challenging times who has closed deals with the United States and others, while supporting global rules.

Yoo has vowed to make the WTO more “relevant, resilient and responsive” and rebuild trust in the body.

Korea has ended its “developing country” status, a move welcomed by the United States. However, the country is in a tit-for-tat dispute with Japan, which some experts say could hinder Korea’s third bid for the director-general position.

CHALLENGES
The next chief will broker international trade talks in the face of widening U.S.-China conflict, protectionism increased by the COVID-19 pandemic and pressure to reform trade rules.

U.S. President Donald Trump’s “America First” policies have upended the global trading order and presented an existential threat to the WTO. Trump has called the institution “broken” and “horrible”. His administration has blocked appointments to the WTO’s Appellate Body that settles trade disputes, which now no longer has the minimum number of judges to convene.

HOW THE DIRECTOR-GENERAL IS CHOSEN
Campaigning, normally in the form of trips to national capitals, has been largely in a virtual format.

The eight-strong field was cut to five in September and two in October. A final decision is due by Nov. 7, just after the U.S. election, which observers said might force a delay.

The WTO is a members-driven organisation with decisions reached by consensus among 164 countries. Three WTO ambassadors who chair leading committees are leading the process, seeking to establish which candidates have the widest support.

In so-called “confessionals”, ambassadors step into a WTO room, or do so virtually, and tell their preferences to this “troika”.

The third and final round takes place on Oct 19-27. Voting is seen only as a last resort if consensus cannot be reached.

The process does not always work smoothly. In 1999, former New Zealand prime minister Mike Moore and Thailand’s Supachai Panitchpakdi divided WTO members, with a compromise finally found to give each a term, shortened to three years from four.

Azevedo’s term finished before his replacement takes office, but WTO members failed to agree on a temporary caretaker director-general, meaning the four deputies are staying on in their current roles.

MORE SOFT THAN HARD POWER
The Marrakesh Agreement that established the WTO in 1995 does not give a detailed description of the director-general role. The responsibilities should be “exclusively international in character”.

The incoming chief will be expected to appoint four new deputies, present budget proposals, and chair the trade negotiations committee which oversees multilateral accords such as on fishing subsidies.

Otherwise, the director-general does not forge global trade policy, but is meant to act as a neutral broker: part administrator, part peacemaker.