The bulletin comes within the same week, when the central bank’s Monetary Policy Committee (MPC) affirmed that Tanzania’s economy will grow by 5.5 per cent in 2020, according to information from The Citizen.

Further, the team noted that—the bank’s accommodative monetary policy was being implemented in a fashion that macroeconomic indicator remained positive, despite the impact of coronavirus (COVID-19) on the global economy.

However, the monthly economic review depicted inflation at a lower level, while exports and foreign exchange reserves remained rather adequate.

“The developments were driven by subdued food prices due to adequate food supply, the stability of exchange rate, as well as prudent monetary and fiscal policies” the report stated. 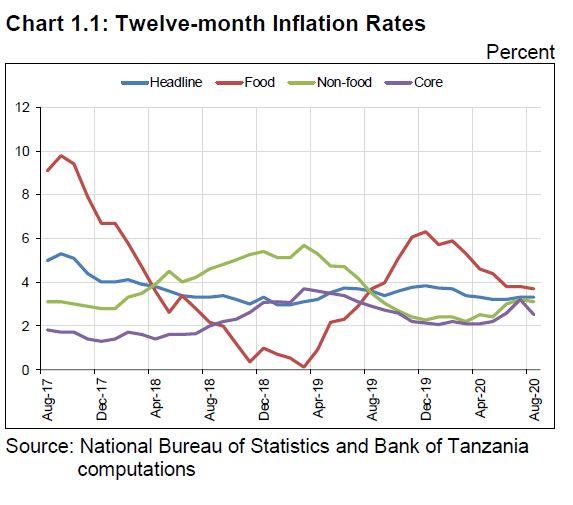 When it comes to month-to-month, the report showed headline inflation was negative 0.5 per cent in August 2020, the same as in the corresponding month in 2019.

The central bank’s report argued that inflation is projected to remain low in 2020/21, ranging from 3.0 per cent to 5.0 per cent.

Food and fuel prices
The report indicated that the average wholesale prices of all major food crops (maize, beans, rice, sorghum, round potatoes and finger millet) decreased in August 2020 when compared to the preceding month, except for beans.

“This was on account of inflow of food to the market from the 2019/20 crop harvests depicts trends of prices of selected major food crops in the past three years,” the bulletin indicated.

However, fuel prices were substantially low. The report said that in August 2020 “average domestic pump prices of petroleum products were relatively low compared with the corresponding month in 2019, reflecting the decline in prices of oil in the world market due to slowdown in global economic activities occasioned by the outbreak of COVID-19”.

Hence, domestic prices of petrol, diesel and kerosene declined by 15.2 per cent, 15.5 per cent and 15.9 per cent, respectively, compared with the corresponding month in 2019.

On the other side, month-to-month basis, things were a bit different. The domestic pump prices of all petroleum products were higher than in the preceding month attributed to increasing in the world market oil prices and transportation cost.

Money and Credit
In this angle, the report painted strong performance, saying “Annual growth of money supply remained strong consistent with the sustained accommodative monetary policy pursued by the Bank to support the expansion of credit to various economic activities and ultimately economic growth”.

Also, foreign assets of the banking system did record an annual growth of 3.0 per cent compared to the preceding year contraction of 1.5 per cent.

The bulletin attributed the recorded growth to increase in claims of banks to non-residents following an increase in exports of goods, mainly from the mining sector.

However, the private sector credit landscape reflected how the economy is gaining momentum. The report depicted strong growth consistent with the bank’s effort to boost liquidity in the banking system.

Interest rates
In this section of the economy, things are quite promising for the banking industry, whereby banks lending and deposit interest rates continued to ease in August 2020.

According to the report, this is a rather deliberate response to the impact of accommodative monetary policy and macro-prudential measures that led to an increase in loanable funds in the banking system.

“Overall lending rate averaged 16.58 per cent in August 2020, a decrease of 19 basis points from the rate registered in August 2019. The one-year lending rate decreased to an average of 15.30 per cent from 16.34 per cent. Overall time deposit rate averaged 6.38 per cent compared with 7.03 per cent, while the one-year deposit rate was 8.35 per cent compared with 8.87 per cent” the report says.

External Debt
In this part of the economy, Tanzania is still battling the stock of external debt which according to the report, was more than US$23B at the end of August 2020, which is an increase of US$186.9M and US$1B from the stocks recorded at the end of the preceding month and the corresponding month of 2019 respectively.

Exports
In this neck of the economy, prospects are rather well. The report showed that the value of exports of goods and services amounted to US$9.3B in the year ending August 2020 compared with nearly US$8.9B in the corresponding period in 2019, owing to increase in goods exports.

“On a monthly basis, the value of exports of goods and services was US$689.3M in August 2020 compared with US$973.8M recorded in August 2019, owing to decrease in service receipt,” the report argued. 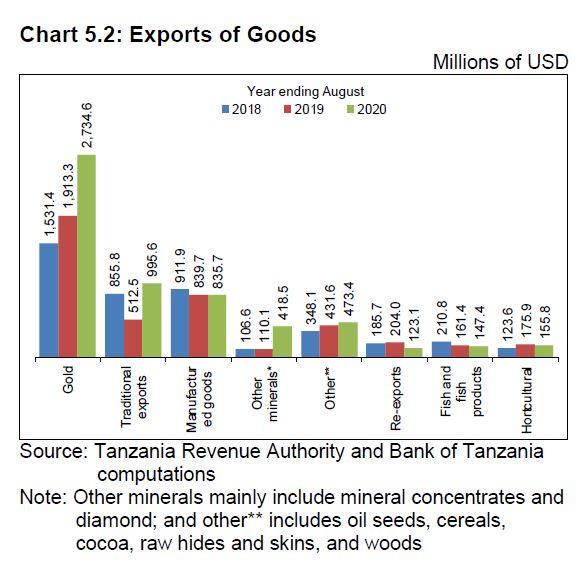 However, on the other side of the sector, the value of traditional exports almost doubled to US$995.6M in the year ending August 2020 from US$512.5M recorded in the corresponding period in 2019, explained by increased exports value for cashew nuts, cotton, cloves and sisal. Sisal exports rose on account of an increase in both volume and unit prices.

On the other hand, the value of non-traditional exports increased to US$4.8B in the year ending August 2020 from US$3.8B in the corresponding period in 2019, mainly on account of increase in exports value of minerals and manufactured goods.

On gold things were significantly better as the mineral accounted nearly for 55.9 per cent of non-traditional exports and increased by 42.9 per cent to US$2.7B, which was a result in an increase in volume and unit price.

Further, the report accounted for the continued weakening of financial asset prices due to COVID-19 as a factor for the increase in gold prices.

“Travel receipts declined by 35.8 per cent to US$1.660.9B due to a decrease in the number of tourist arrivals attributable to COVID-19 pandemic. Travel receipts during August 2020, dropped to US$43.8M from US$268.6M in August 2019, following the suspension of international flights and lockdowns in major tourist source markets” the report noted.

Imports
This sector saw a slight downturn, whereby the bulletin displayed the import bill for goods and services decreased to around US$9.4B in the year ending August 2020 from more than US$10.2B in the corresponding period a year earlier, largely driven by a decrease in import of capital and intermediate goods.

Hence, the report argued that, except for transport equipment, machinery and oil, all other categories of imports increased.

“The value of oil imports, which accounted for 18.7 per cent of goods import declined by 14.3 per cent to US$1,485.1M consistent with a decline in oil prices in the world market,” the report stated.

Tanzania is currently strategizing to maximize its resources utilizing to ascend towards the middle-income level, and this reality could come soon as it has already demonstrated by leaping toward lower-middle-income country level.

The Republic of the Congo – sub-Saharan Africa’s third-largest producer – is already a regional leader regarding natural gas monetization...