Opinion: Why gold is a solid investment option during crisis

In my last post here on FurtherAfrica, I touched on the history of Gold as a reserve currency and raised some questions related to the current monetary system and its potential consequences. Given that recently, the week ending on September 25th marked Gold’s worst week in months – with its price falling to US$1,865/ounce, I decided to write again about the shiny precious metal, sharing with you my personal views on why I like it from an investment perspective (as I promised on FurtherAfricas’ Last Week podcast, Episode 5).

To begin with, Gold is accepted worldwide and it is a reliable currency. It has been used as a store of value and reserve currency for more than 6,000 years already. It is non-degradable, non-replicable, independent, and it is not one’s liability. Gold is scarce and its supply has been relatively fixed for the last century, not to say the level of production is likely to level off in coming years. Each year, Gold mining adds approximately 2,500-3,000 tonnes to the overall stock ever mined (as the commodity is not consumable, it keeps adding). Current stocks are nearing 198,000 tonnes (which brings the stock-to-flow ratio close to 60x). Gold has been, historically, a great hedge during economic crises (I will elaborate more on that), it has a low correlation with other financial assets (sometimes negative), and if we apply Goehring & Rozencwajg relative valuation methodologies, it seems relatively cheap nowadays.

In addition to all this, we are not only facing a worldwide dire economic crisis, but also a deep crisis of trust, in my humble opinion. I could elaborate more on why I believe the crisis of trust also corroborates my bullish views on Gold, but I’d rather focus on the economic side.

Also read: Gold rally a sign that dollar’s reign is in question

As a portfolio manager, it is extremely important to know where the interest rates are heading in the future – especially if you work with Fixed Income portfolios, as they are sensitive to moves in the yield curve. In the last few months, if one would ask me what I have been reading and what has been keeping me awake at night, my answer would be: are we heading to an inflationary or deflationary world post-crisis/post-pandemic?

Even though I am more inclined to believe we are going to face inflationary pressures in the years to come, given the exaggerated fiscal stimuli and the rhythm of money printing, decoupling inclinations, less supply, and pent-up demand once we have the vaccine, we also know that this extreme rise in money supply is not reaching the real economy, that people are still saving more and avoiding spending as much as possible, and that Oil prices are very, very low (not to mention that gains in productivity derived from tech innovation have been capping wage inflation in the last decades).

Now, you must be asking yourself: where am I going with this inflation x deflation discussion?

Well, Gold is widely known to be a great asset to hold onto during high inflationary times, as it increases in value as the purchasing power of the dollar declines. What is less obvious and therefore not a widespread belief is that Gold is also a good protection over deflation. The 1930 Gold bull market is here to prove it, when it happened amidst a massive deflationary economic collapse. Besides, the latest Gold bull market took place when we had both inflationary and deflationary forces simultaneously – beginning in 1999. Now, I would guess you got my point. What usually precedes a Gold rally, therefore, is less related to whether we are facing inflationary or deflationary forces, but rather if we are witnessing periods of intense money printing by central governments (box checked) and money supply significantly exceeding growth in gold supply (box checked).

Now the cherry on the cake: let’s take a look at Gold from a relative price view. Goehring & Rozencwajg use some ratios in order to show us that, if we can identify periods when Gold is extremely undervalued, then it can produce superior uncorrelated return afterwards. The ratios we will be analysing are the Dow/Gold and US Gold Reserves / Fed’s Monetary base. Take a look below:

1. Dow Jones Industrial Average / Gold Price.
The first graph I extracted from Goehring & Rozencwajg 2Q2018 report (if you follow commodities, I would highly recommend you to subscribe to their public reports), and the second graph I made it myself (using data from 2001 onwards). As per the G&R graph and table below, we can see there have been 3 periods of extreme overvaluation of financial assets versus Gold in the last 100 years, which were followed by the opposite move – depreciation of the Dow and appreciation of the commodity. In my second graph below, we can infer we are entering the next bull market, given that since August 2018, the precious metal has already gone up more than 60% (using August 2020 as closing price). It is true that the ratio hasn’t reached the valuation extremes it had touched on 1970 or 1999, and that we are already trading below the ratio of 18x which was achieved back in 1929. Now, though, let’s add another analysis to this one: the size of Fed’s Balance Sheet. 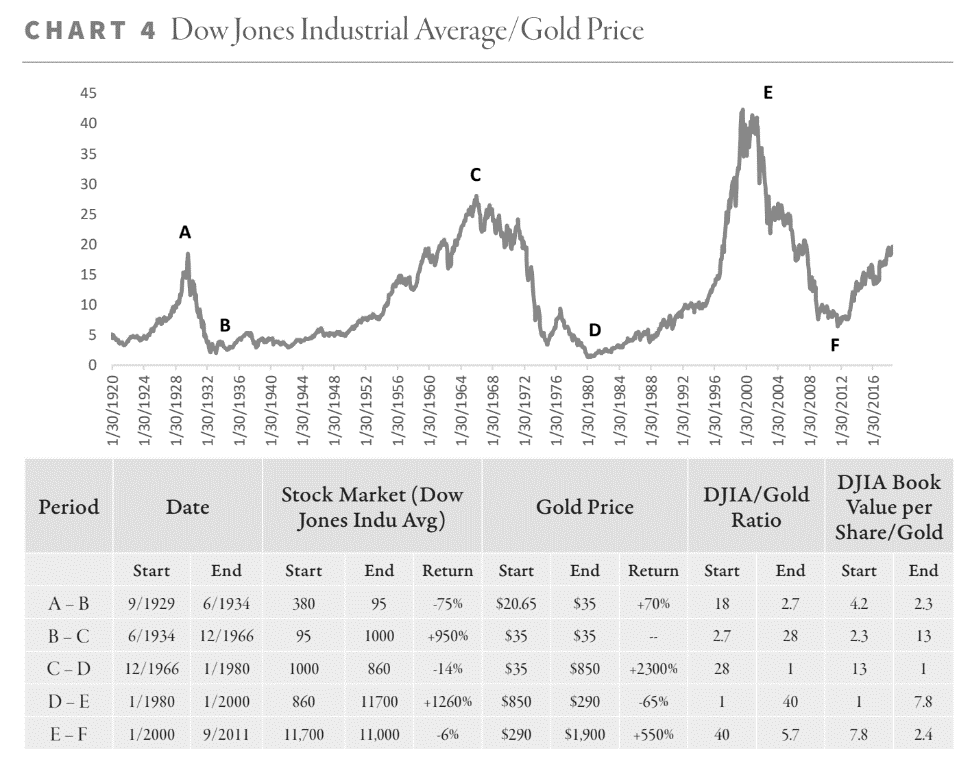 2. US Treasury Gold Holdings / Federal Reserve Monetary Base
Here, again, I am copying the graph from G&R report, and I didn’t even spend my precious time on updating it because it is widely known that the US Gold Reserves have been stable since 2008, while Fed’s Balance Sheet has been skyrocketing since then, and especially now as the Coronavirus crisis unfolds (this one is a sight to behold, not to mention it is frightening – so I added it below). 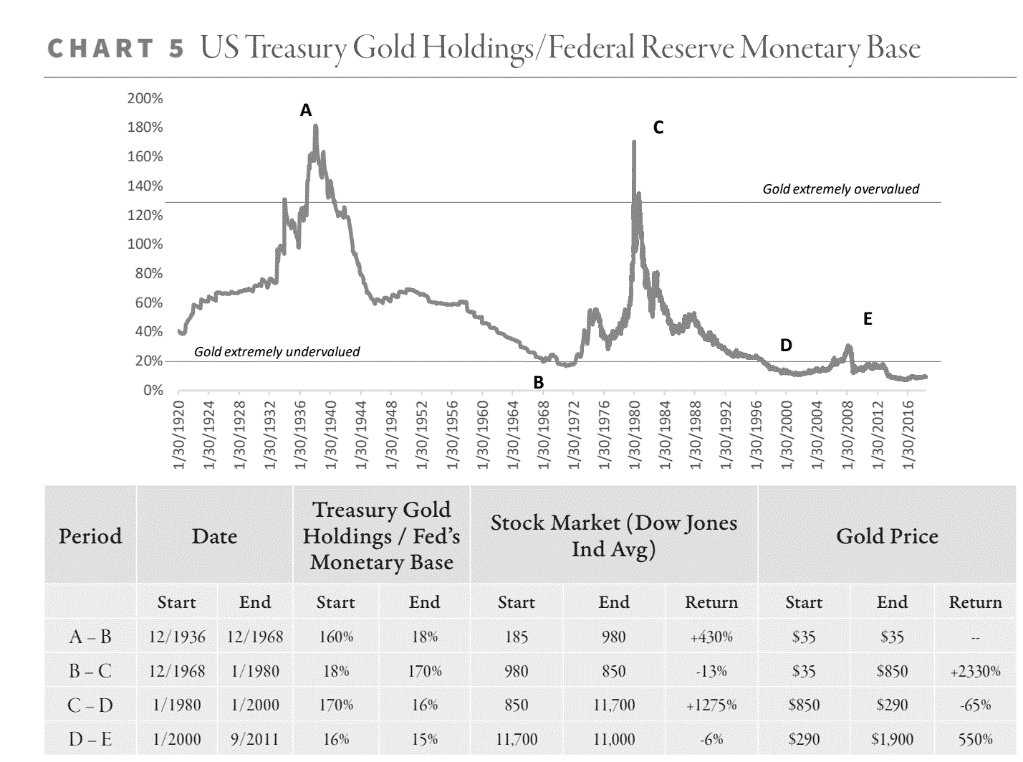 What is important to see in the chart above is that in periods where Gold has been radically undervalued (late 60s’ and late 90s’), the Fed’s monetary base exceeded the value of the Treasury’s Gold holdings by more than six times. As per my calculations, considering the latest price of Gold, and the September Fed’s Gold Reserve (8,133 tonnes), the market value of Fed’s holdings is now close to US$485B, whereas the last figure for Fed’s Monetary base (as of August, 2020), is US$4,8T. So even with this recent rally on Gold price, we are still in “Gold extremely undervalued” territory – as the current ratio is around 10%.

To conclude my thoughts, valuing the fair price of an unconsumable commodity is very hard, and the fact that the main holders of Gold nowadays are Central Banks does add more complexity on this endeavour, as they can easily influence the commodity price moves. My point here is by no means to reach a price target for the Gold ounce, or make a bet as to where we are headed in terms of price variation, but merely to share with you some reasons why I think Gold can make sense nowadays, as a good diversification factor in one’s portfolio – mainly in these environments of lower (not to say zeroed) yields for much longer combined with record fiscal policies worldwide.

Disclosure: This article expresses my own opinion and it is for informational purposes only. This is not a recommendation and should not be interpreted as such.

Maputo Port Development Concession (MPDC), the concessionaire of the Port of Maputo, expects, by the end of 2022, to have...