Africa operating as a bloc best for economic recovery

African trade experts have called for the swift implementation of the African Continental Free Trade Area (AfCFTA) to lift Africa out of the economic downturn caused by Covid-19.

Speaking at a trade forum in Dakar, Senegal, AfCFTA Secretary-General Wamkele Mene said that the pandemic had, for the first time in 25 years, caused a contraction of GDP of between 2 to 5 per cent in sub-Saharan Africa.

“This decline will manifest itself in reduced exports and loss of employment, among other challenges. However, it is projected that the implementation of the AfCFTA will boost intra-Africa trade by US$35 billion, increasing value-chain development across all sectors, enhancing the competitiveness of industry and reducing the trade deficit by 50 per cent,” said Mene.

Dorothy Tembo, Deputy Director of the International Trade Centre (ITC), a joint agency of the World Trade Organization and the United Nations, said the continent must work toward operating as one trade bloc by January 1, 2021.

“ITC is fully engaged in helping the African private sector to convert opportunities offered by the AfCFTA into concrete business transactions,” she said.

She also announced the launch of ONE TRADE AFRICA, a new ITC programme to unlock the full business potential of the AfCFTA targeted at micro, small and medium-sized enterprises.

“The AfCFTA must be an engine for growth as much as an engine for inclusion. This is also about leaving no one behind and fulfilling the Sustainable Development Goals by 2030,” said Tembo.

She said that, as for any regional integration process in the world, it takes time to design the conducive ecosystem, adjust and strengthen institutions, build the right trade infrastructures and empower the citizens to play an active role and access opportunities offered by the single trade area.

Mene said the AfCFTA was working with partners to develop a vibrant programme for small and medium-sized enterprises (SMEs), with a particular focus on women and youth. It is estimated that informal traders and SMEs undertake 30 to 40 per cent of cross-border trade in Africa.

Sharing a similar perspective, Samba Ndao, Secretary-General of Senegal’s Ministry of Trade, Small and Medium Enterprises said, “AfCFTA is an instrument of regional integration, a ramp towards constructive globalisation and inclusive economic and social development.”

Mene said that African customs administrators and other trade facilitating and regulatory authorities are critical players in ensuring the seamless flow of trade on the continent.

“With this in mind, the harmonization and coordination of customs operations and border agencies cooperation is a priority for the AfCFTA,” he said. 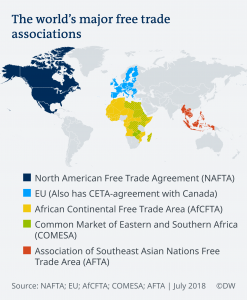 “It incorporates investment, compensation, intellectual property and e-commerce,’ he said. ‘We know from empirical evidence that the African market combines a GDP of US$3.4T and a population of 1.3 billion people.”

Globally, the Covid-19 crisis could cost the economy an estimated US$28T in output losses over the next five years.

Also read: AfCFTA: from agreement to implementation, what you should know

Speaking at a virtual IMF and World Bank Group annual meeting, Georgieva noted that projections show a partial and uneven recovery in 2021 with a 5.2 per cent growth.

For Africa, the AfCFTA remains the main option and hope for recovery.

The continent which is majorly supported by MSME’s needs to ensure that it does not squander the opportunity to grow as presented by the agreement.

The continent’s youthful population is in dire need of gainfully engagement to avert an unemployment crisis which calls for investments in job creation where small businesses benefit from policies that enable their growth.

In August this year, the African Import-Export Bank (Afreximbank) and the International Trade Centre (ITC) teamed up to help small businesses make the most of the trade agreement. The partnership will see small-business owners and young entrepreneurs in Africa trained to trade with other African countries as part of the AfCFTA.

While the operationalisation of the AfCFTA has been delayed by the Covid-19 pandemic, Africa should make hay while the sun shines and ensure that the trade agreement benefits those most in need especially after the pandemic induced recession.