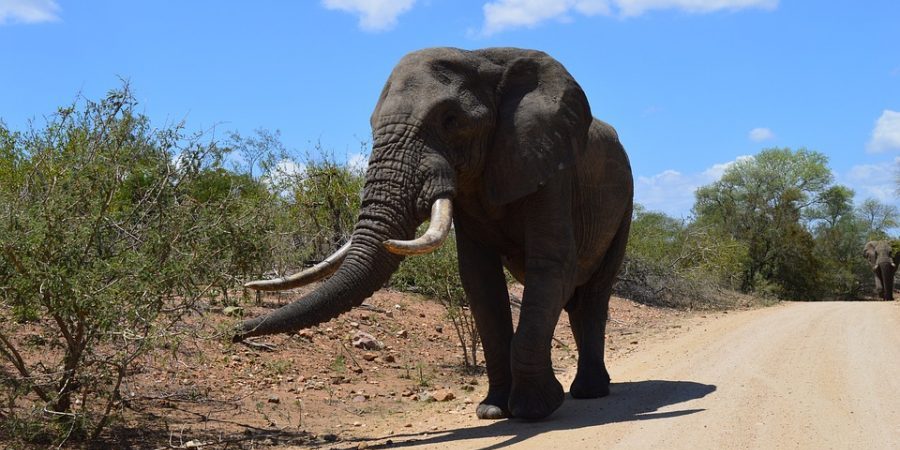 Botswana may have found a solution to its elephant overpopulation: It’s going to encourage some of them to leave the country.

Botswana’s tourism industry, which accounts for a fifth of the economy, is heavily reliant on the world’s biggest elephant population, but the animals have become a political issue as there are too many of them and they destroy crops and occasionally trample villagers. Now, elephants are beginning to migrate into neighboring Angola and the governments of both countries are helping them do so by removing land mines left over from Angola’s civil war and tearing down fences.

“It’s the idea that we have, particularly looking at the overpopulation we have,” said Philda Kereng, Botswana’s environment minister, in an interview. “We have to help Angola understand the value of elephants.”

Botswana’s 135,000 elephants mostly live in a 520,000 square kilometer (201,000 square-mile) area known as the Kavango-Zambezi Transfrontier Conservation Area, which spans five countries and is home to almost half of the world’s African elephants. Angola’s elephants were pushed across the border by a decades-long civil war that ended in 2002. Illegal hunting elsewhere, especially Zimbabwe, has also boosted Botswana’s elephant population.

Before the war, Angola had about 100,000 elephants, compared to less than 10,000 today, according to researchers. Most lived in the lush southeastern highlands, from which rivers feeding Botswana’s Okavango Delta wetlands originate.

“Southern Angola has prime elephant habitat, and, if conditions are safe for elephants, they will return to Angola in great numbers,” said Mike Chase, the founder and director of research non-profit Elephants Without Borders. “It is natural for elephants to leave areas where numbers are high and seek out areas with fewer elephants for uncrowded access to food and water.”

Also read: Magnificent rescue of a family of African elephants an example to the world

His organization has tagged almost 150 elephants with satellite tracking collars to map their movements in Botswana and neighboring countries. Chase said some are now returning to Angola.

“I am confident if afforded the right protection, elephant numbers in Angola’s conservation areas could increase quickly,” he said.

More funding is needed for the removal of barriers such as livestock fences, the protection of migration corridors and the education of local communities, said Tamar Ron, a wildlife ecologist who has acted as biodiversity consultant to the Angolan government, by email. Angola has allocated $60 million to remove land mines in the area.

“Angola needs to prepare for the expected migration and re-population of elephants and other wildlife into the country,” she said.