Fiscal restraint and COVID-19: What next for the Rand?

The South African Rand has continued to appreciate against the greenback recently and is almost at its best levels since March this year.

While the weakness of the dollar in the wake of the contested election in the US has played a large part, investors have also been heartened by recent signs of fiscal restraint on the domestic front.

There was little to cheer in Finance Minister Tito Mboweni’s Medium Term Budget Policy Statement (MTBPS), but it did paint a picture of a government taking a responsible and clear-sighted look at the state of the economy.

Investors are not keen on the government’s plan to bail out SAA to the tune of R10.5B, but the minister was praised for his realistic approach to South Africa’s debt problem.

South Africa’s economic woes long pre-date the COVID-19 pandemic, but in March it lost its last remaining investment-grade credit rating, leading to higher borrowing costs. Lenders are watching carefully for any sign that the government will be unable to foot the bill of any further borrowing. Aware of this scrutiny, the government has presented an honest appraisal of the economic damage and the long path back to stability.

Also read: South Africa aims for national airline to fly again in first half of 2021

Mboweni’s aim is now to reach a budget surplus by 2025/26 and has forecast that the debt-to-GDP ratio will hit 95.3% in the same year before falling again. 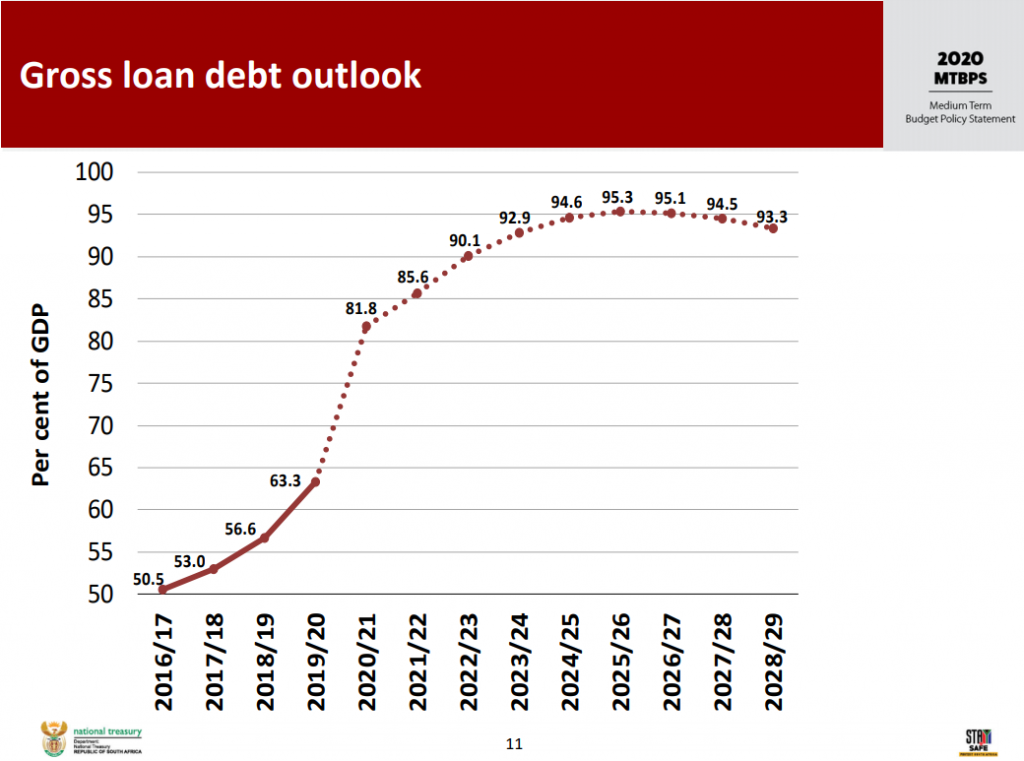 Hovering over all of this is the very real threat of a second wave of COVID-19. Ramaphosa is due to speak to the nation in the next few days and a second lockdown is not off the cards. The impact this will have on the already battered economy is almost unthinkable.

Bjorn Michels, CEO at TradeForexSA, an online Forex trading hub, points out that the future is unpredictable – but that the risk of a weaker Rand is high.

“A lot rests on whether the nation is forced into another lockdown. If the government is forced to increase its borrowing in the short-term, we could see investors and ratings agencies quickly get cold feet. The knock-on effect on the Rand’s value would be swift.”

He continues: “While the current projections for South Africa’s debt load and fiscal rebalancing do look realistic, these are not worth the paper they are printed on if the economy is hit by another lockdown shock. Once the political situation in the USA settles, we expect the Rand to fall back from its recent highs and remain under serious pressure in the medium-term.”

There is a real danger that the government finds itself in a situation where it needs to increase its borrowing to cover the cost of another lockdown, thereby worsening South Africa’s credit rating and making further borrowing more expensive. This would require punitive cuts to the public budget which would only hinder any economic recovery – the potential for a spiralling decline is very real.

Unsurprisingly, Ramaphosa wants to avoid this scenario at all costs. Whether he will be able to is a tough question. Currently, the delicate balancing act of not overloading the public health system and keeping the economy open is tipped in the government’s favour. Whether this can be sustained until a vaccine is widely available will decide the fate of the Rand and South Africa’s economy.

Jeffrey Cammack is the Editorial Director & COO of Schlossbrink AB – the owner of the Tradeforexsa.co.za brand. He has over 12 years of experience in financial product marketing, education and analysis. Jeff has been a Forex trader since 2007, having first started in marketing complex investment products in 2006. He narrowed his professional focus to CFD and Forex products in 2010 and has been reporting on macroeconomic issues and currency analysis since 2012. He has been quoted by various media outlets, including MarketWatch, Yahoo News and US News & World Report. His educational background in communications has given the organisation strong editorial direction and clear, actionable mentorship for our readers. Jeff has held many educational, management and advisory positions in the online world. From his start in corporate education, his approach has always been to drive change and knowledge growth. He achieves this through clear and structured communication with the goal of helping others understand complex issues with ease.

Food and Agriculture Organisation of the United Nations (FAO) has pledged USD 42 million to help Angola gain access to...