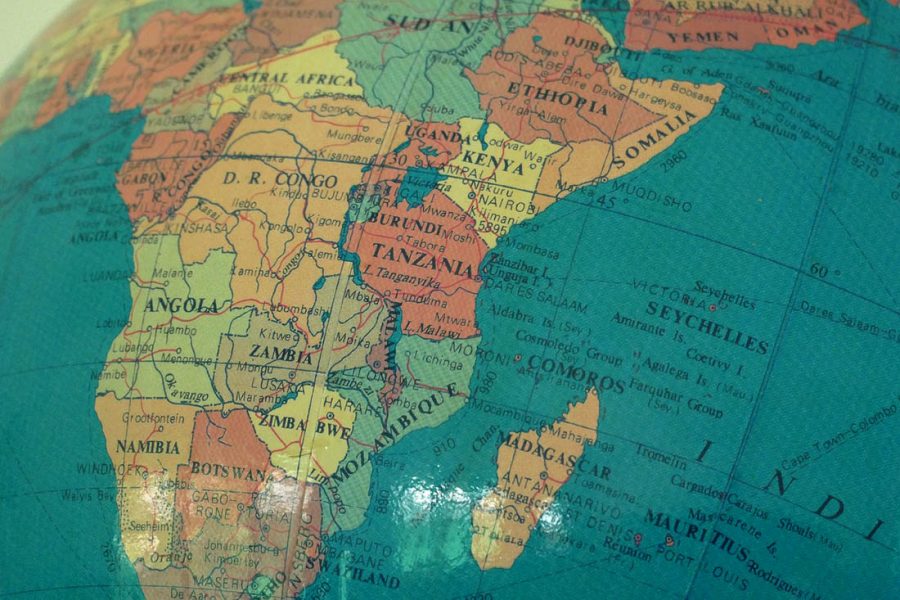 He is a modern-day African version of Willy Fogg and he describes his travels around the African continent as a dream come true.

Artist Reggie Khumalo completed a 20-week, 14-city tour across Africa on a motorcycle and all in the name of education and his need to lend a hand, or in his case, a hand and a paintbrush.

The 33-year-old who turned professional just four years ago, undertook two trips across Africa which took him from Cape Town to Cairo and started out as his contribution to the #FeesMustFall Campaign.

Khumalo said he simply had to answer the call and he wanted to do something practical. Raised in Zimbabwe and Botswana, Khumalo believes he was raised across Africa.

“I decided to make art and donate the money to schools. “I could always paint and draw. “I love motorcycles, travel and art, so with The Ride and Artists Within I was able to combine my passions to support education,” said Khumalo.

The artist said his message was to fight capitalism from within and he needed to make money to help others. “I believe that empowering people, especially the youth, is key to empowering themselves. Capitalism is not going anywhere. We need to learn about it and use it to our advantage.

“I call this radical ubuntu,” he said. And just how did he do it? Khumalo would ride into a country and hang out in the villages and there he would make contacts to help him on his quest.

“Everywhere I went, I met people who were so willing to help. “I cannot tell you how many times I heard ‘you don’t have to pay here, you are my brother’. Once I almost got stuck in the Sahara Desert in Sudan.

“The people I met gave me petrol and did not want to accept any payment. This is the true spirit of ubuntu. “I can honestly say that I have experienced ubuntu.

“Most people talk about it but I have lived it,” said Khumalo. He’s African safari not only took him through some of the most magical places on the African continent but also some of the more dangerous ones.

“I was there when they took out (Omar) al-Bashir. I was so humbled when I saw women fighting in Sudan. I was moved by the strength of women. I am a feminist too. Women carry Africa on their backs. I was so moved when I saw women carrying logs up and down a mountain and children on their backs. It just moves me to be able to play a small role. I have often cried at the beauty of Africa. I even cried at just the sight of an elephant. This is my journey,” he said.

Khumalo said he was blessed to collaborate with artists in every country he visited and learnt the art of stone-carving in Victoria Falls and wood-carving in Malawi and built up a network which will bode well for future endeavours.

One of the most moving experiences for Khumalo was a trip to a beach in Xai-Xai, Mozambique where he met a 10-year-old boy selling wares.

He learnt that the child could not afford to be in school and was instead eking out a living selling shell necklaces on the beach.

“I immediately put him on my bike and took him to the school, paid for his tuition and bought his uniform. “In Malawi I visited a school that was falling apart and with the money I made from selling my art I was able to be part of a project to build a shelter at the school and assist with a feeding programme to supply breakfast to the kids for a year. When I left the school, I looked back and saw the children being fed. I just cried. I cried many times on my journey,” said Khumalo.

In Ethiopia Khumalo was instrumental in building extra classrooms and showers at a school and helped start a feeding programme. But it wasn’t all heartache for Khumalo who said the beauty of Africa is forever etched in his memory.

“In Tanzania I saw the silhouette of the sun setting and the animals on the plains. I don’t have words for what I saw. I didn’t take a picture. “That scene is within me. I too am desperately trying to find myself,” admitted Khumalo.

He said often on his journey he was forced to travel through the night from village to village and to him it seemed that the whole of Africa came out to guide him.

“I cannot see very well at night. One night I was riding in the dark, not really sure if I was on the right track and suddenly the moon just came out and lit my way. This is why I say that Africa herself supported me,” he recalled.

Back at home in SA, Khumalo is a contributor to African Women Chartered Accountants (AWCA) where he helps to nurture young accountants.

“For me this is about for Africans by Africans,” he said. Khumalo’s art and travels made even the UN sit up and take note and he was recently appointed as the World Food Programme ambassador for the SADC region.

“I really didn’t expect this. I am not doing this for publicity. I want young people to move Africa and build a new Africa we can be proud of. We have everything right here. I don’t want to talk about ubuntu, I want to show ubuntu,” said Khumalo.

Khumalo is set to travel to Europe next year where he hopes to sell more of his art, form collaborations and spread his message of “For Africa, by Africans”.