The Dubai Chamber International Office Mozambique, in partnership with Angola-UAE Chamber of Commerce and Industry and AIPEX (Angolan Private Investment and Export Promotion Agency) will host a free webinar tomorrow called “Expand your Business to Angola”.

H.E Vera Daves,  Angola’s Minister of Finance and Treasury has recently confirmed her participation in the event, which aims to promote a better understanding of the Angolan market and support the expansion of UAE companies internationally by providing new perspectives to facilitate business and investment opportunities in Angola. 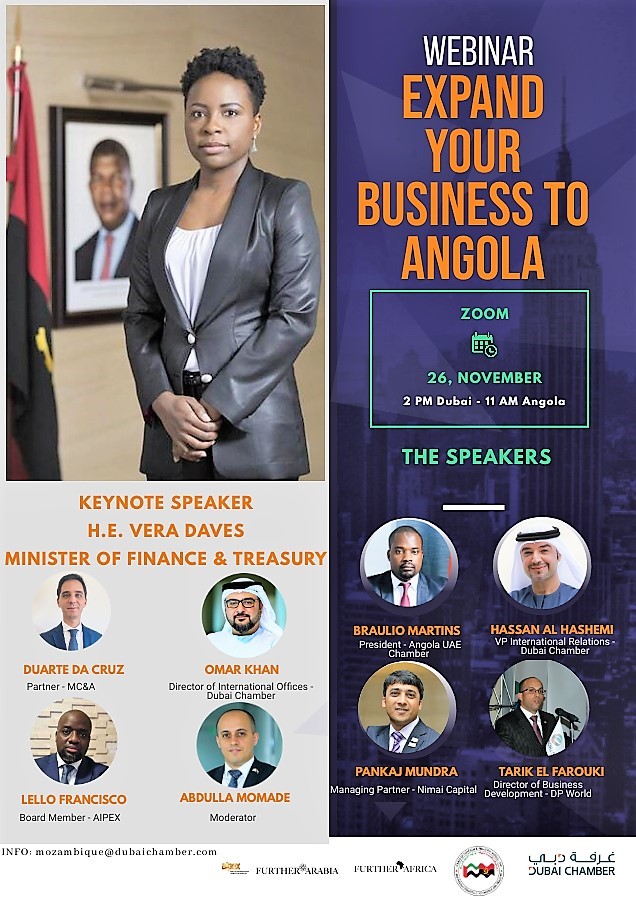 You may still register for the event by clicking on this link.

The webinar’s full agenda is now available and you can consult it below:

Webinar Agenda_Expand your Business to Angola


The highlight will be the panel discussion which will include representatives from MC&A, DP World, AIPEX and Dubai Chamber, and we expect to have an insightful perspective from Angola’s side, the market trends, priorities, challenges and perspectives while at the same time looking into the UAE’s perception on the Angolan market through the views of Dubai Chamber and Dp World.

There are many interesting topics of discussion we are anticipating, such as Angola’s Government recent focus on economic diversification as it tries to be less oil-dependant, the best business and investment opportunities for Dubai companies to pursue, Angola’s major privatization programme, the UAE’s double taxation agreement with Angola and its benefits, amongst others.

French American oil and gas services company, TechnipFMC, has been awarded an offshore subsea contract in Angola by French energy...