The continent-wide effects of AfCFTA on wage and income gains

The effects of the AfCFTA are expected to differ significantly by country and area of policy reform. The World Bank estimates that the highest income gains due to the AfCFTA will occur in Côte d’Ivoire, Zimbabwe, Kenya and Namibia, which would see income gains of over 10 percent each by 2035.

Furthermore, the AfCFTA is expected to have a positive but heterogeneous impact on wages across region, skill level, and gender. In Southern Africa, for example, the World Bank projects that wage gains will be higher for male workers than female workers.

In contrast, in Central, East, North, and West Africa, wage gains are expected to be higher for female workers. These gains will depend not just on tariff liberalization–for which benefits are generally low – but on trade facilitation measures and the reduction of non-tariff barriers.

Intra-African trade is set to enjoy its most impressive rate of expansion during implementation of the AfCFTA. Preliminary estimates show that cross-border trade could increase by US$34.6B (52 percent) by the end of the second decade, and a further US$85B if trade facilitation, rather than just tariff liberalization, is undertaken as a complementary measure during implementation (UNECA, 2015). Empirical results from gravity models (which are based on a partial equilibrium approach and do not account for feedback and interaction effects) are consistent as well, showing that tariff reductions associated with the AfCFTA would significantly boost cross-border trade within the region (Afreximbank, 2018; IMF, 2019). 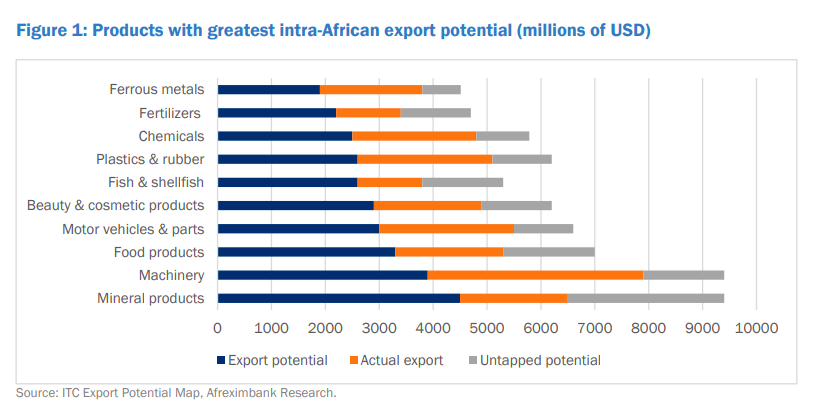 It is fair to tout the AfCFTA as an economic and globalization game changer. The world’s largest free trade area in more than 70 years aims to defragment Africa and transcend the colonial boundaries erected during the Berlin Conference in the 19th century. Economies of scale and competitiveness gains associated with the reform could accelerate the process of industrialization in Africa and the diversification of its sources of growth, which could lift its living standards closer to those in highincome countries.

Preliminary estimates say that the other significant potential gains of the reform will be the strengthening of Africa’s bargaining power in international trade negotiations, the sustainable increase in its share of global trade, and the catalyzing of the growth of regional value chains and their integration into global value chains. Such gains would enhance the continent’s integration into the global economy, where trade largely has been dominated by manufactured goods with increasing technological content.