Zambia: February 2021 inflation breaks 22.5% as the cost of living doubles

On the upside, exports are booming as Zambia slowly escapes dependence on imports

Over the past few months, every Zambian citizen has experienced an extremely sharp rise in the cost of living. As exports rose, we hit K9 billion in trade surplus for the first time in more than a year. But an over-dependence on South African imports has left the country reeling, as the after-effects of a disastrous year for the Kwacha keep increasing.

We dove into the numbers so that you don’t have to, and hopefully, everyone can find this summary helpful in tracking the potential increases in the cost of their favourite goods. The year-on-year Annual inflation rate for February 2020 was recorded at 14.4% compared to 22.5% recorded in February 2021. This development was mainly attributed to price movements of food items such as Bukabuka, Dried bream, Dried Kapenta Mpulungu, Cooking oil and fruits (such as Oranges, Pineapples and Pawpaw).

Consumers are starting to feel the pressure as the average food basket hit K8000 to cover the basic needs for the year, doubling from last year.

Last month the Bank of Zambia announced a stiff rise in the benchmark interest rate from 8% to 8.5% as a measure to combat record-breaking inflation. Despite this effort, the Kwacha continued its record-breaking run hitting 22.5% inflation in February. This is the highest rate of inflation since September 2016, with a record inflation at 23.4%.

According to the Zamstats monthly bulletin, the growth in inflation is strongly attributed to a 27% increase in the cost of food; while non-food items saw a drop from 16.7% in January to 16.2% inflation, food increased by 1.7% from 25.6% in January. The cost of food items includes the cost of stable goods such as Meats, Fish, Fruits, Milk, Eggs, Fats and Oils.

The fall in the cost of non-food items is attributed to the slowdown in the cost of communication (3.4%) and Education (5.3%). The significant price increases included a 19.4% increase in the cost of Household Equipment, Maintenance and Furniture from Feb 2020. The cost of healthcare similarly saw a sharp increase of 15.5% from Feb 2020 and compared to the 13.1% from January 2021 seems to be further on the rise.

There has been a stabilization in the price of staple foods like mielie-meal. The maximum value of a bag of mielie-meal last month was K195 in Chiengi (Luapula Province) and was sold cheapest in Monze (Southern Province) for K120. Despite this, we have seen decreases in the net prices of breakfast mielie-meal (-10.76%), Roller Meal (-15.62%) and Maize Grain (-20.41%).

The numbers are representative of extreme price inflation maintaining Lusaka as the most expensive place to live in Zambia with an average rate of inflation at 6% for February 2021. Lusaka and the Copperbelt combine for an average inflation rate of 5% in comparison to nationwide inflation of average of 1.5%. 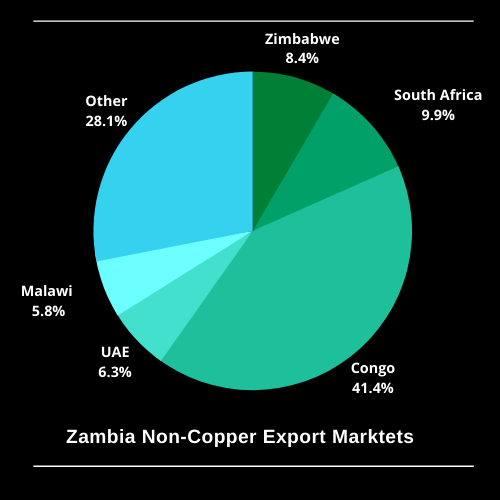 Zambia has maintained a strong export run which contributed a total K17.5 billion in January 2021 (latest available statistics). Road Transport accounted for K11 billion in trade while rail (K2.2 billion) and air (K0.4 billion) followed far behind. The total volume of transported goods was 595,300 Metric tons of goods. The total value of imports stood at K8.2 billion with 64% coming in by road transport. This led to a net trade surplus of K9.3 billion, representing an increase of 48% up from December 2020 (K6.5 billion). This can largely be attributed to the 19% decrease in the value of imports from K10 billion in December 2020 to K8 billion in January 2021.

There has been a substantial increase in the value of copper having reached a heavy bottom price of $6000 per tonne peaking at $9000 per tonne this month and $8000 per tonne in January. ZCCM’s acquisition of Mopani copper mines is proving to have had perfect timing as the price of copper has quintupled in price from the date of Glencore’s decision to leave the mine. We increased the volume of refined copper being sold by 10,000 metric tonnes to 81,000 Mt in total production. We saw a decrease in the export earning of Agricultural goods from K0.9 billion to K0.8 billion in January 2021. Switzerland (home of Glencore) accounted for 66% of export earnings, with China (20%) and Singapore (12.5%) coming in behind. Congo is our largest export partner in Africa with 8% of export earnings coming from our neighbours. 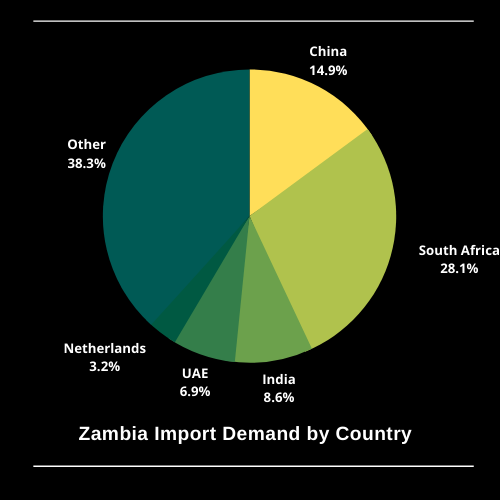 Over the last year we have had a reality check. As the rest of the world prepares to return back to life pre-COVID, we are still awaiting our first vaccine batch. Similarly, a delayed impact on the economy is mercilessly increasing the cost of living for every Zambian. We hope that with increase monetary intervention we can see an easing of the impact on the economy.