Australian mining company Syrah Resources has completed the installation of a new industrial testing facility for the processing of graphite mined from Mozambique’s Balama graphite operation, the firm announced.

Syrah Managing Director and CEO Shaun Verner said, “In our view, this milestone further positions Syrah as the most progressed ex-China option for vertically integrated supply of natural graphite AAM for USA and European battery makers and OEMs. We have been very encouraged by initial feedback from in-progress product testing and qualification processes. Syrah remains on track to become an important supplier of natural graphite AAM to ex-Asia markets.”

The announcement was made in a statement distributed Monday, after the furnace was installed to treat the ore that is being supplied to potential customers on a trial basis and to obtain certifications.

Syrah is progressing detailed design on the initial expansion of production capacity at Vidalia. A Final Investment Decision (“FID”) for the construction of a 10ktpa AAM facility at Vidalia is planned during H2 2021, subject to end customer commitments and strategic / financial partnerships, with production expected to be 10,000 tons per year, fed by the Balama mine in northern Mozambique. 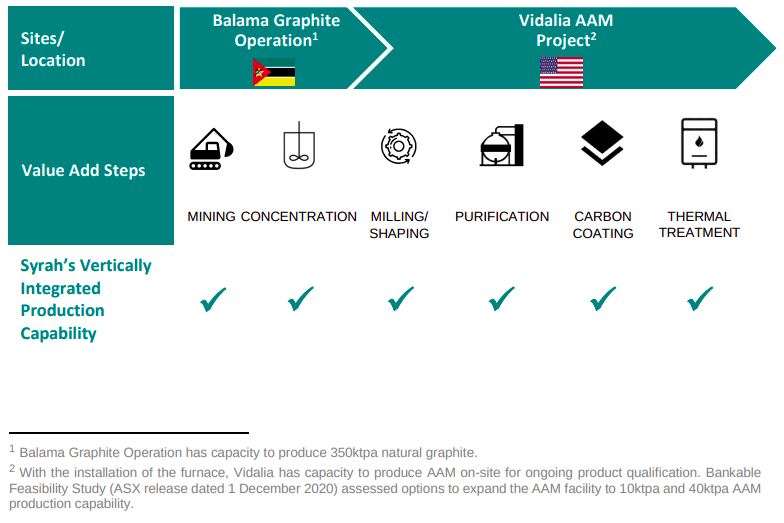 The mine resumed graphite production ahead of schedule this month, after being shut down for a year because of the impact of the Covid-19 pandemic, with travel restrictions limiting workers’ mobility, and also due to falling demand.

Natural #graphite production has recommenced ahead of schedule at our Balama Operation in Mozambique: https://t.co/HFPTULAqnw

Balama will be operated in parallel with progressing our natural graphite AAM project at Vidalia, Louisiana, USA. $SYR pic.twitter.com/2Q0y56XqX0

Syrah will use the furnace installed at Vidalia for fully integrated AAM production for ongoing product qualification, which is an iterative process of product testing with potential customers.

The Balama mine began commercial production four years ago and employs around 650 workers, almost all of whom are Mozambicans.

The Balama graphite operation in Mozambique is a globally significant natural graphite resource as it will enable the Company to participate in the long-term growth of the electric vehicle industry.

China is the biggest market and, at the end of 2019, the graphite also began supplying the unit being built in the US.