The Outturn
After posting positive real GDP growth for over 2-decades, Africa’s 2nd largest Copper producer succumbed to a recession sizing 3.0% in line with global growth outturns. This was largely due to the Covid-19 pandemic which exacerbated pre-existing fiscal vulnerabilities (elevated debt service and tight fiscal space) and tight liquidity conditions. Over and above of this came a decline in consumer demand and disruption of supply chains as authorities instituted measures to fight the pandemic. Other challenges included the crowding out effect of public sector borrowing as government relied more on domestic financing to meet revenue shortfalls. Moreover, tight fiscal space meant arrears owed to private entities grew thereby squeezing liquidity among private sector players.

The peak of the pandemic-exacerbated economic woes came in Q2 2020 as growth plunged to -5.9% from -0.3% in Q1 before moderating in the last two quarters. These negative effects were as a result of anxiety and fears exhibited by both firms and consumers manifesting in mobility data which showed heightened home confinements as employers sent people home. In addition, government also stepped in to restrict the scope of business operations while also closing some entities such as bars and nightclubs. Voluntarily, consumers avoided trading/retail corridors, recreation centers, grocery stores/pharmacies and parks thereby sending public transport points quieter. Mobility trends improved in subsequent quarters as did other economic metrics in coincidence with the relaxation in the containment measures by the authorities.

Most Forecasters Miss the Point as ZANACO Came Closest
For many health experts, the pandemic was to hit developing nations the most given their weak healthcare systems that showed the least preparedness. Zambia was no exception and, on this account, and presumably in addition to existing challenges already highlighted, the IMF had, in June 2020, forecasted that the economy of Africa’s second largest copper producer would shrink by 5.2% (this number was adjusted upwards to 4.4% in October). On the extreme opposite, the World Bank was overly optimistic with a recession projection of 0.8% indicated in June before revising the number to a 4.5% contraction in January 2021 (See Figure 3 below).

Meanwhile, our (ZANACO) growth forecast indicated a recession sizing 2.4% and we, in our June 2020 monthly economic report, advanced a number of tailwinds that made us relatively more optimistic than the IMF but not strong enough to agree with the World Bank. These included the continued flow of international trade (as the government did not close national borders) in combination with a quick recovery in commodity prices resulting in 54.5% y/y jump in export receipts to ZMW 145.27 billion while import spending went up 4.3%; aggressive liquidity injections from the central bank (money market liquidity in 2020 improved 156% to an average of ZMW 2.64 billion) at the time that the government successfully issued a ZMW 8 billion Covid-19 bond while also offering a ZMW 10 billion stimulus package (slow disbursement rate limited the latter’s effect though); as well as rapid discounting of pandemic fears leading to a quickened improvement in mobility and shopping trends (see Figure 2 above).

Sectoral Distribution of Pains and Recession Moderators
At the top of the hardest hit were sectors that are highly dependent on physical human contact in both production and consumption as well as those that are highly sensitive to income changes. The leading pain takers were the arts/entertainment/recreation and accommodation sectors with output contractions of 71.6% and 23.7%, respectively, as inbound tourism froze, activities of entertainment nature were restricted by government at the time when people also voluntarily confined themselves to their places of abode in fear of contracting the virus. Closure of all learning institutions in April through September sent education sector to a 19.3% contraction while reduced resource mobilization (net taxes fell 12.5%) weighed on government spending thereby resulting in a 15.9% decline in public administration and defense.

On the contrary, a number of sectors recorded positive growth rates either by leveraging on the opportunities embedded within the pandemic or on account of other factors. Favorable rainfall pattern during the 2019/2020 season lifted agro/forestry/fishing sector output 17.2% while also boosting electricity generation and water supply (water supply also benefited from elevated hygiene adherence as frequent handwashing themed 2020) 3.1% and 2.1% respectively; strong demand for telecommunication services (for instance, working from home and desire to stay in touch with loved ones saw Airtel’s traffic for voice calls and data jumped 29% and 77%, respectively) gifted the ICT sector a 14.3% growth; while output for the transport and storage sector rose 13.8% on none-closure of the country’s borders and a quicker improvement in mobility trends.

Further, the 13% growth in the financial and insurance sector came at the back of elevated public sector participation as well as firm working capital needs (largely for preservation of business entities); the mining and quarrying sector benefited from a steamy recovery in commodity prices (copper ended 2020 at a near 8-year high of USD 7, 772.24/MT from a more than 4-year low of USD 5, 057.97 touched in April); and increased response sensitivity to health conditions buoyed the demand for human health services (including for Covid-19 supplies such as masks and sanitizers). The other sectors that posted positive growth numbers were real estate as well as administrative and support services. 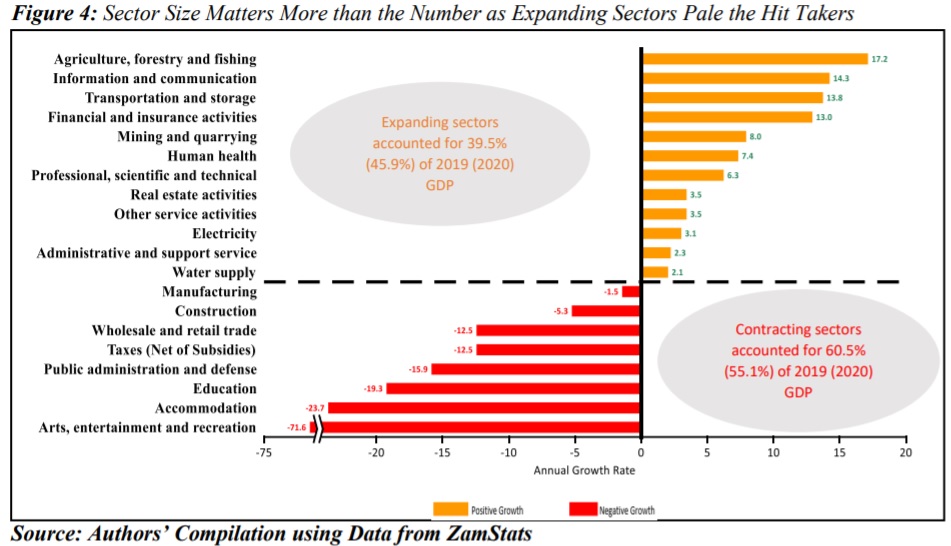 Main Takeaway
Like many economies around the world, Zambia recorded a recession in 2020 sizing 3% as per preliminary data and for the first time since 1998. While the Covid-19 pandemic is widely cited by many commentators as the cause, the country’s macroeconomic environment was already fragile on factors ranging from tightening fiscal space to liquidity stress. In tracing the defiance in the degree of damage on the health front as predicted by many health experts, the size of the recession was not as deeply feared and projected initially by various economic houses. Within the thicket of the Covid-19 damage, some sectors did witness positive externalities while others leveraged on factors delinked from the pandemic in addition to government’s policy stance. Nonetheless, sectors that are highly dependent on physical human contact in both production and consumption including those that are highly sensitive to income changes took a huge knock thereby plunging the country into a maiden recession in over two decades.

——————–
The authors are economists at ZANACO Bank, Zambia’s largest Indigenous Bank. However, the views and conclusions reached in this paper are solely those of the authors and do not reflect on those of the Board, its Management and Staff