I ended my May 2021 essay with the hypothesis “…leading fintechs might turn around and start acquiring the banks” and, sure enough, on the 12th of May 2021, the Competition Authority of Kenya in a gazette notice approved the acquisition of 84.89% stake in Century Microfinance Bank by Branch International Limited – a leading global fintech with operations in Kenya1.

One of the signs of a maturing ecosystem is homegrown ventures mature into unicorns2, gazelles and zebras3, increased mergers and acquisitions4 and the entry of global tech giants hungry for a piece of the action – the subject of this essay. So, whilst the Branch acquisition was unexpected, it was unsurprising when Twitter announced on 14th April 2021 that they are setting up their Africa HQ in Ghana5.

On the very same day Amazon announced an investment of US$280M in their new 70,000 square meter office complex in Cape Town as their African HQ6. Even though Amazon has been in SA since Amazon Web Services (AWS) first established its presence in Cape Town in 2004 and later opened a Joburg office in 2015, this is the biggest investment in an African HQ7 by a tech company. They subsequently partnered with the South African Post Office (SAPO) to establish the Amazon model in Africa8. In February 2021, global music streaming giant Spotify announced, it is now available in more than 80 emerging markets including Ghana, Kenya, Nigeria, Tanzania and Uganda9.

Even though Facebook has had an office in SA since 2015, Mark Zuckerberg’s visit to Nigeria in 2016 led to the opening of their second Africa office in Lagos in 202110. Amidst the pandemic last year came the big news, Stripe acquired 100% of Paystack a leading African Fintech – this was the strongest signal that big tech in coming into African Fintech11. This is because the African fintech sector is heating up and big tech does not want to be left out.

In some ways, these could actually be seen as latecomers to the party because even though some have been around much longer, in 2007, Google setup it first African office in Kenya hiring now Minister of ICT, Joe Mucheru to lead the charge12 even though it had some sales guys in SA dating back to 200613. Google has since built an extensive presence in Africa14. Microsoft has also had presence in South Africa dating three decades back15 but in 2013, it launched its Microsoft4Afrika initiative in Kenya to start investing in start-ups, SMEs, partners and youth16. 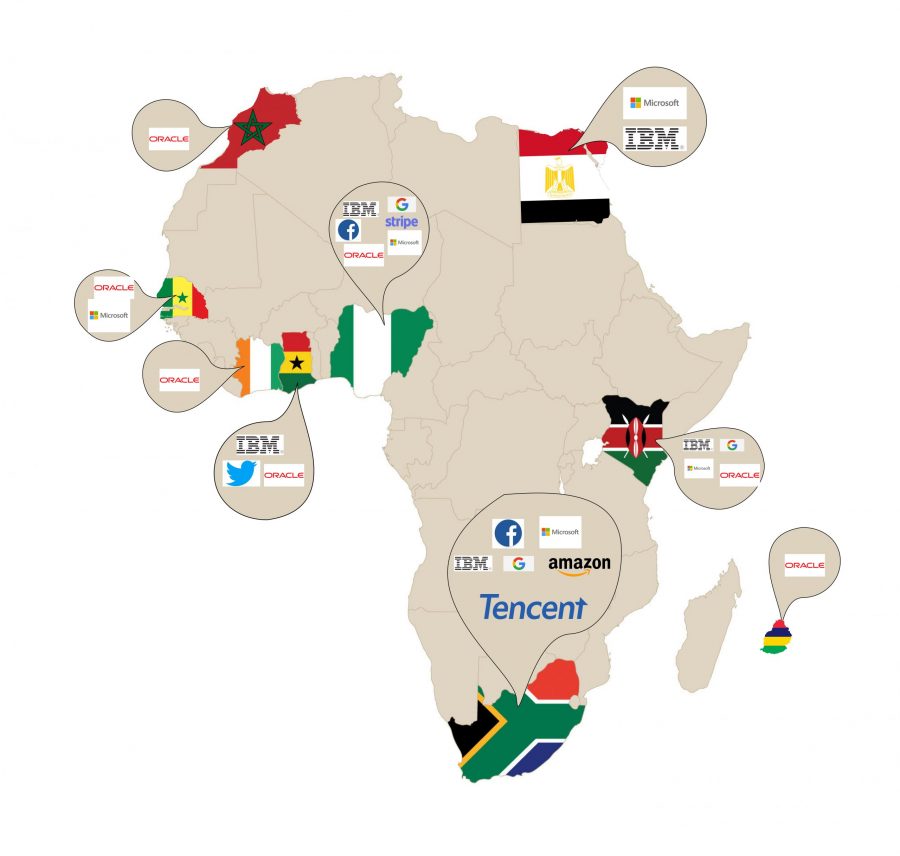 In 2019, Microsoft launched a US$100M initiative to establish development centers over the next five years starting with Kenya and Nigeria17 and recently announced the establishment of two data centers to bring services closer to its users18. That puts Microsoft in the forefront of initiatives aimed at the African tech ecosystem19. In 2013, the International Business Machines (IBM) Corporation also opened a US$100M research facility in Kenya20 followed by Oracle making its first Africa acquisition of Nimbula, a provider of private cloud infrastructure management software21 which was how Oracle entered the cloud business22.

In the same year, Chinese tech giant, Tencent, opened an Africa office in South Africa through Naspers (their shareholder) to operate WeChat Africa to somewhat unsuccessfully compete with WhatsApp23. Tencent is now primarily responsible for the operations of the JOOX music entertainment app24. Back in 2001, Naspers made a US$34M investment in China’s Tencent Holdings for 33.3% which is now valued at more than US$175B so Tencent could afford to have an Africa office. In May 2021, Dutch listed technology investor Prosus NV increased its stake in Naspers to nearly 50% in a share swap deal that will move part of their holdings in China’s Tencent to Amsterdam25.

Even though Alibaba, another Chinese Internet giant does not yet have a formal Africa operation, it’s founder Jack Ma has made periodic visits to Africa since 2017 suggesting that they may setup an office soon26 especially since he stepped down to focus on philanthropic activities on the continent27. The latest evidence of this is their partnership with Flutterwave28. In 2019, Chinese owned Opera browser, launched Opay into the Nigerian market to make its debut into Africa with a US$50M investment29.

Opay is now raising US$400M at a US$1.5B valuation – joining the unicorn club30. In 2008, another Chinese tech manufacturer, Transsion opened offices in Nigeria and later other countries for the African market with a focus on low-cost phone brands like Tecno, Itel, Infinix, etc some of which it now manufactures in Ethiopia31. It has recently setup Transsnet in a joint venture to focus on creating an application layer on top of their smart phones – for example, Boomplay for music and Palmpay for payments.

Finally, we have also seen the trend of the CEOs of some of these big tech companies visiting the continent to ascertain things for themselves. So far about eight of them have made multiple trips32 including then Google Chairman Eric Schmidt’s visit in 2013 to Kenya following which he wrote a detailed observation33. With this much attention on Africa as the current nexus of global tech innovation, is it possible that some of the new Special Purpose Acquisition Companies (SPACs) that have raised soo much capital through the public markets (such as Tidjane Thiam’s Freedom Acquisition I Corporation) would also start looking at acquisition targets in Africa?34 especially when leading fintechs like Flutterwave have made it known that they want to go public35.