In this time of crisis, we are often reminded of a famous quote, attributed to Churchill during World War II: “If you’re going through hell, keep going.” While South Africa is not in the middle of a physical war, it is battling the COVID-19 (coronavirus) crisis in full force.

Like most other countries, South Africa could not escape the pandemic. It suffered the loss of lives and livelihoods. At the time of writing, in early July 2021, more than 64,000 South Africans have lost their lives. The third wave is hitting the country very hard and infections keep rising every day. But there is also light at the end of a very long tunnel.

The government responded swiftly and strongly to the crisis while also spearheading an international alliance for the distribution of vaccines in Africa. If the South African government would carry out with the same determination longstanding economic reform as it was fighting the pandemic, COVID-19 can serve as a turning point in re-energizing South Africa’s economy and labor market.

While South Africa is set to emerge from the crisis weaker than it was going into it, the World Bank’s most recent South Africa Economic Update argues that the reasons for low growth and high unemployment do not lie in the Government’s crisis response. Instead, the pandemic has exposed long-standing structural weaknesses that  have progressively worsened since the global financial crisis of 2008–09.

For 2021, the World Bank projects a gross domestic product (GDP) growth of 4%, followed by 2.1% in 2022 and 1.5% in 2023. South Africa’s weak recovery is putting pressure on public finance. For the first time ever, public debt is now almost 80% of GDP and under the current trajectory debt levels will not stabilize before 2026. However, the current global recovery is helping South Africa, especially the strong rebound in China and the United States—two of its key trading partners. As other emerging markets are recovering faster, South Africa’s economy could have benefited more in 2021 if integration with the rest of the world was stronger (Figure 1).

Figure 1: South Africa’s contraction in 2020 was deep, and recovery in 2021 will be moderate 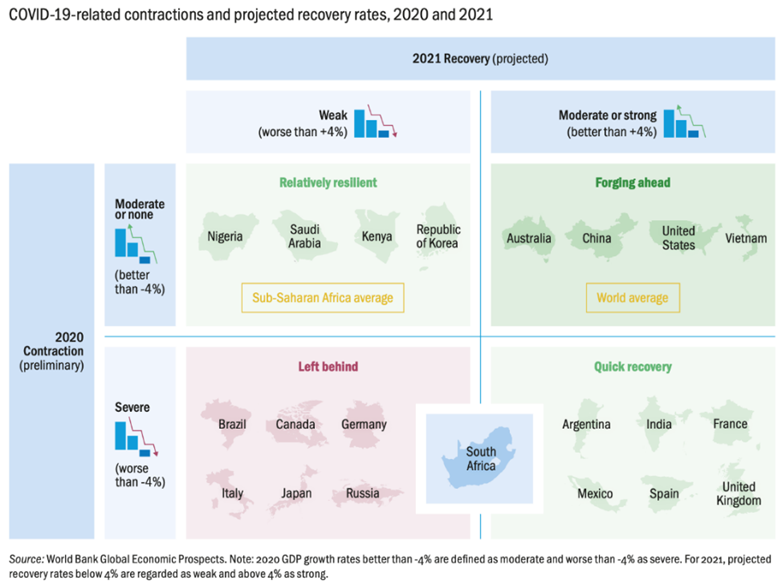 The crisis has exposed South Africa’s biggest challenge: its job market. Even in the best of times, the labor market has been marked by high levels of unemployment and inactivity. Out of a working age population of almost 40 million people, only 15 million South Africans are employed, which includes three million jobs in the public sector. The COVID-19 crisis has made a difficult situation worse because low-wage workers suffered almost four times more job losses than high wage workers. In 2021, we saw a modest job recovery, but it is at risk due to the third wave.

Against the odds, there also positive developments in the labor market and young entrepreneurs are one of South Africa’s best hope to solve the jobs crisis. There are an increasing number of start-ups, especially in the digital sector, which are growing fast and could in future become an engine of jobs growth. Cape Town alone, the ‘tech capital of Africa’, has over 450 tech firms and employs more than 40,000 people . In 2020, a total of $88 million (R1.2 billion) disclosed investments went into its tech start-ups.

A focus on young entrepreneurs would also help South Africa to close its large gap in self-employment (own-account workers with own businesses, freelancers) which only represents 10% of all jobs – compared to around 30% in most upper-middle income economies such as Turkey, Mexico, or Brazil (Figure 2). If South Africa were to match the self-employment rate of its peers, it could potentially halve its unemployment rates.

South Africa’s economy would benefit from measures to preserve macroeconomic stability, to revitalize the jobs market by improving the investment climate to build a better and more inclusive economy after the pandemic. There is a risk that the recovery leaves behind most of the potential economically active population, particularly young job seekers, which would mean that the pandemic permanently impaired the country’s long-term development prospects. Conversely, if South Africa were to engineer a broad-based recovery, this decade could bring new prosperity .

Addressing structural constraints to growth behind and at the border could support exports and higher growth, and so preserve the sustainability of public finances. The experience of major emerging economies shows that the two most potent factors for reducing public debt-to-GDP ratios are economic growth and primary surpluses. The implied priorities are self-evident: a better climate for investment and trade, and prudent fiscal policy.

To generate employment, South Africa would have to address three chronic problems in its labor market: extremely high rates of inactivity, high rates of unemployment, and low levels of self-employment. Along with enacting carefully chosen regulations to improve the business climate and investing in the workforce through better education, the government can implement reforms to encourage self-employment and support the growth of micro and small enterprises.