Under the umbrella of Emerald Europe, the European subsidiary of international investment company Emerald Group – focused on impact investment and innovation, the new magazine will be published bimonthly and will be distributed in all six Portuguese-speaking African countries, as well as Portugal, for which Emerald Group also holds publishing rights.

Focusing on themes which are common to the PALOP (the portuguese nomenclature that stands for “Portuguese-speaking African countries”), Forbes África Lusófona intends to bring big entrepreneurs and key market players to the forefront, highlighting the backbone and makeup of these six economies’ business environment, whose aggregated GDP amounts to US$100 billion.

Nilza Rodrigues, the editorial director for this new and promising project, stated in a press release:

“We are stronger together, therefore we will connect Portuguese-speaking entrepreneurs in order to promote real synergies that come out of the paper and influence the [PALOP] community, for the better”.

She adds that the team behind the project is “100% Lusophone”, from the Editorial to the Administration, all with proven experience in their respective countries, living up to the commitment of harnessing the immense talent pool of Lusophone Africa.

N’Gunu Tiny, Chairman of the Board of Directors, declared:

“It is a project designed to give voice to the [lusophone] entrepreneurs, who with their know-how and creativity implement a local dynamic that can and should be thought of in unison by the six PALOP”.

This inaugural edition will also hit newsstands in Portugal, in the regions of Greater Lisbon, Greater Porto and  the Algarve, representing the sense of unity that is intended to be achieved through the common tongue, whilst respecting the differences in each country, yet united in economy and culture. 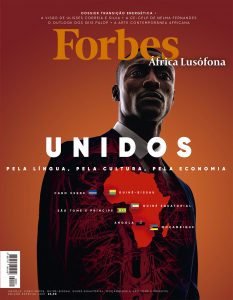 This is represented by the first issue’s cover, photographed by São Tome’s Herberto Smith and having as model the Portuguese Mauro Lopes, of Angolan and Cape Verdean ancestry.

The word “Unidos” – United, in Portuguese – aptly translates the mission this new and highly ambitious project sets out to accomplish: unity through diversity.

“We designed a roadmap and made transformative choices that are still guiding us today that can be summarized in three...