Zambia debt in record demand with investors betting on recovery

Zambia attracted bids for more than eight times the amount of domestic-currency bonds offered at the latest auction, with yields plunging as investors bet on an economic recovery under new President Hakainde Hichilema.

The central bank raised 2.5 billion kwacha ($157 million) at a sale on Friday, having received bids for a record 12.5 billion kwacha. Yields fell across the curve, with those on the five-year notes dropping almost 8 percentage points to 25%.

While that yield doesn’t offer much real return, with inflation at 24.4% in August, a sharp appreciation in the nation’s currency could signal that consumer-price growth will ease in the coming months. Zambia imports everything from fuel to fertilizer, so currency volatility has a major bearing on inflation.

“There’s a sense of euphoria,” said Mweemba Mwiinga, chief investment officer at African Life Financial Services Ltd. in Lusaka, the capital. “If you’re a local investor, with the appreciation of the kwacha, there’s the expectation that inflation will come down. There’s a bit of FOMO as well.”

Since Hichilema was declared the election winner on Aug. 16, Zambian assets have rallied. The kwacha has surged 21% against the dollar, more than any other currency tracked by Bloomberg globally, and the southern African nation’s dollar bonds have shown world-beating returns. Investors are betting he’ll be able to revive an economy that became Africa’s first pandemic-era sovereign defaulter last year after a decade of overspending fueled by external loans. 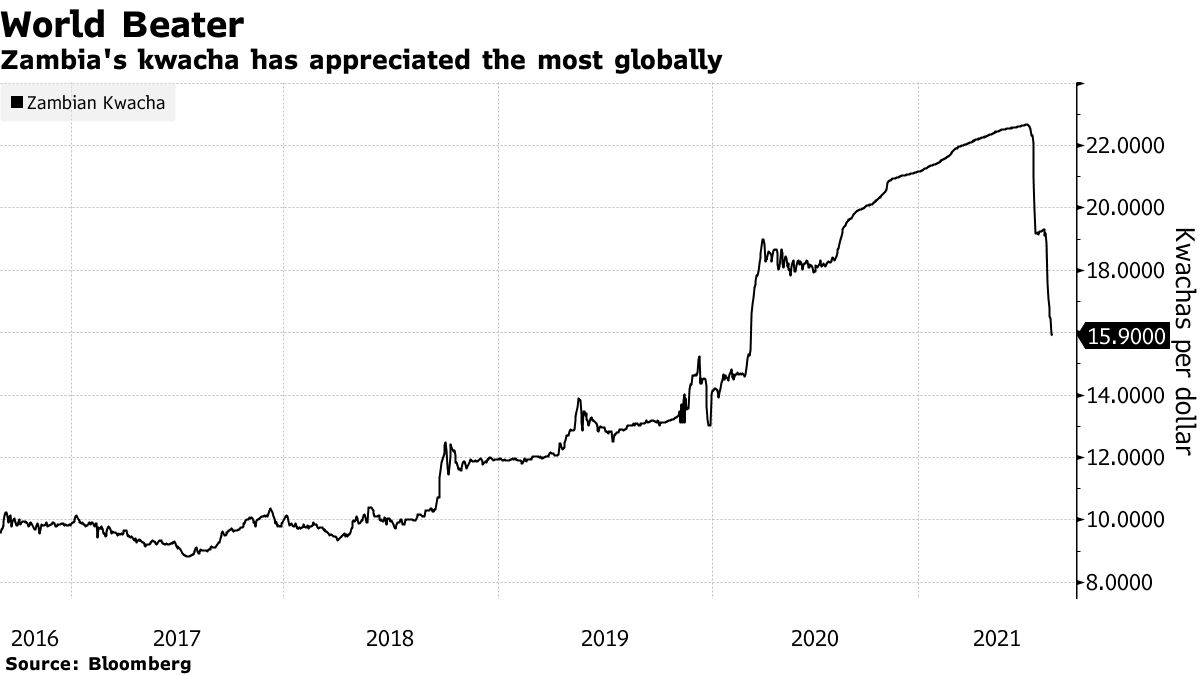 The currency appreciation will continue, according to Situmbeko Musokotwane, who Hichilema appointed as finance minister on Friday. He aims to secure a deal with the International Monetary Fund by November, which will further boost confidence. He’s also seeking to more than double copper output over five years in Africa’s second-biggest producer of the metal.

Musokotwane has emphasized the need to create jobs by boosting economic output, especially in mining. He’s struck a different tone to the previous government that had a hostile relationship with mining companies, that in turn held back on investment.

“It’s not having copper underground that makes you rich,” he said in comments broadcast on state television on Sunday. “What makes you rich is the stuff to be mined out and sold, profits made, taxes paid, jobs created.”

Musokotwane will need to deliver a credible budget that finds a balance between appeasing voters and winning endorsement from the IMF, which may require cuts to fuel and farm subsidies. He also faces what promise to be tough debt-restructuring talks with creditors.

The finance minister said he intends to present his plan to lawmakers by late October.

“He has made a lot of positive pronouncements, but obviously the proof of the pudding will be in how some of these things will be implemented,” Mwiinga said by phone. “The key thing to watch will be the budget.”