Why mobile internet is so expensive in some African nations

In Malawi, people have been paying around 87% of gross national income per capita for 1GB of mobile data. Rwandans only pay 2%. DW examines the reasons for this huge price discrepancy.

The smartphone and the internet play the same crucial role for Tabu Kitta as they do for most Africans in their 30s:

There are days, however, when businesswoman and press officer Kitta has to do without the internet. Malawi has the most expensive mobile internet rates in Africa. 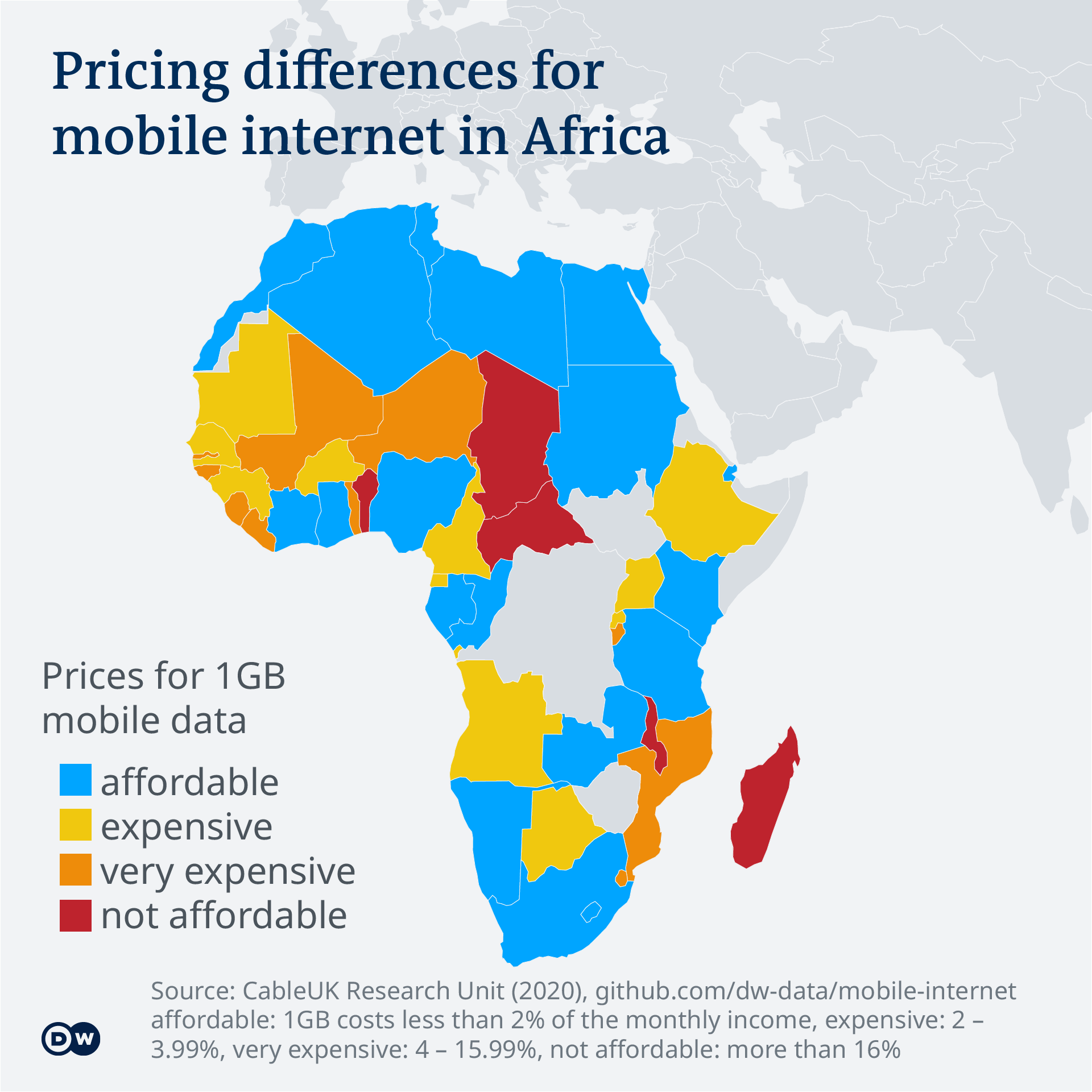 “On a good day, I spend about three dollars for a one-day data bundle,” she said. But she can’t always afford it.

Kitta estimates that she spends a total of about $70 (€56) a month to go online.

“The prices for mobile data are indeed a challenge for many Malawians.”

Only in America is mobile data more expensive

The costs are a challenge for most Africans. On average, African providers charge $3.30 per gigabyte, as shown by a worldwide survey by British provider Cable UK. Only the American continent has higher prices.

“Since incomes in Africa are low and the price of mobile prices are generally quite high, if people express that in a ratio, the difference becomes  even bigger,” Martin Schaaper from the United Nations agency International Telecom Union (ITU) told DW, whose team regularly analyses developments in the telecommunications market.

By that measure, prices in Africa are thus much higher than in other parts of the world, and especially compared to industrialized countries, he explained.

The tendency is nevertheless for a positive adjustment. “It’s getting more affordable in most parts of Africa, especially if you look at the price of data in comparison to gross national income per capita,” Schaaper said.

Also read: Are Mobile Operators the next Fintech Startups? 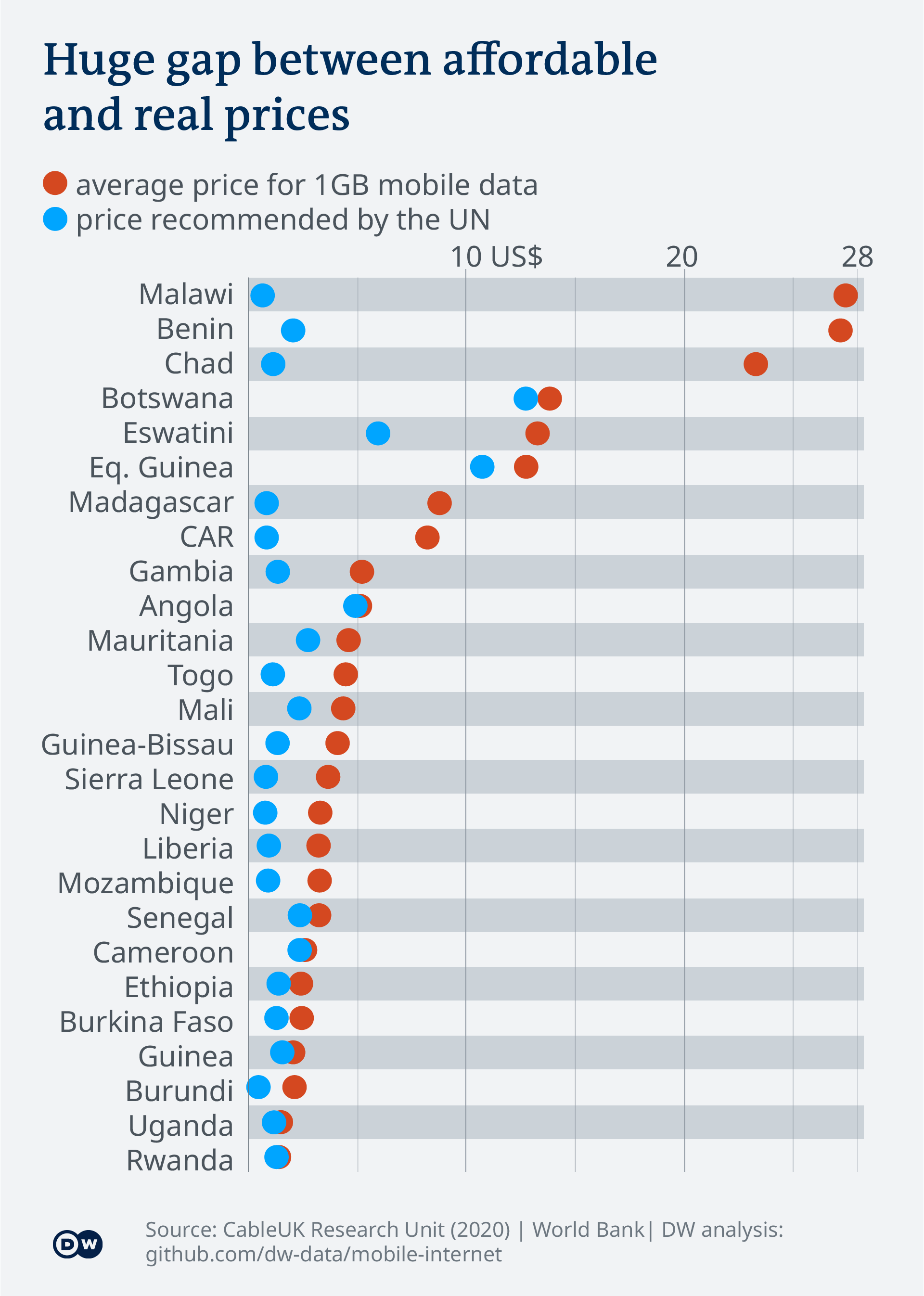 Malawi is an extreme example for inflated prices. One gigabyte of mobile data here costs an average of $27.41, according to Cable UK. The United Nations recommends that this amount of data should cost no more than 2% of gross national income per capita. In Malawi the equivalent cost is 87%.

Benin and Chad’s pricing also diverges significantly from the UN recommendation. There too, mobile internet is many times more expensive than would be appropriate in view of the country’s economic power. 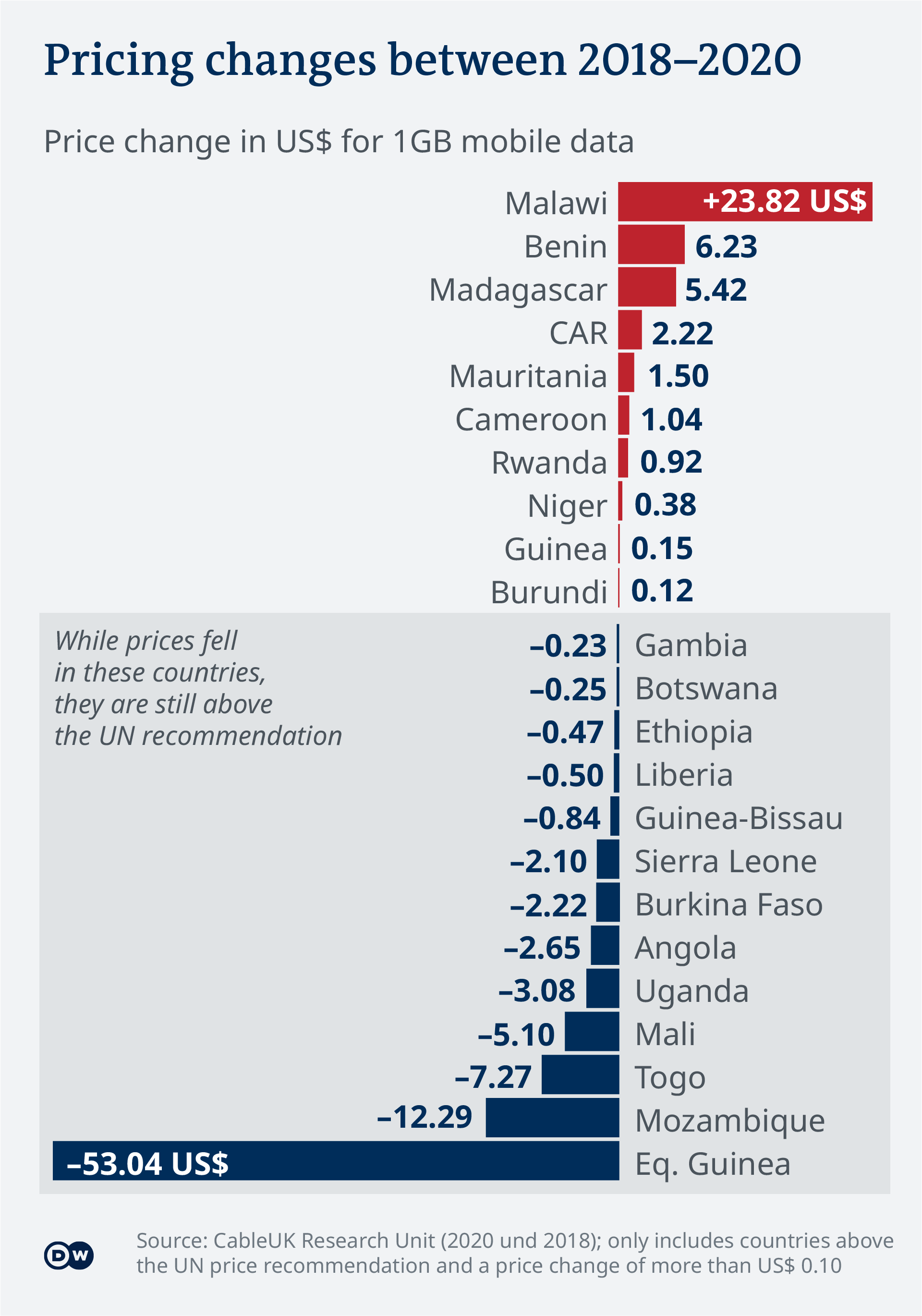 Many reasons for high prices

A major cost factor for providers is the infrastructure: “They had to upgrade from 2G to 3G to 4G and now 5G,” said UN telecommunications expert Schaaper.

“This calls for constant investment, which has to be refinanced. What is more, in Africa many regions are difficult to access — it is particularly expensive to set up infrastructure there.”

Schaaper quotes the low number of competitors in the market as another important factor: “If there are only one or two providers in a country, they have little incentive to lower prices,” he said.

A third factor is much more difficult to prove with data: mobile phone prices also depend on the policies of the individual country: “Is the government willing to help providers? Is the government willing to make access more affordable to the general public and help cover remote areas? And this changes from country to country,” said Martin Schaaper.

Ethiopia is an exception because its mobile telephony is in public hands. No private sector competition to the state-owned “Ethiotelecom” is allowed. 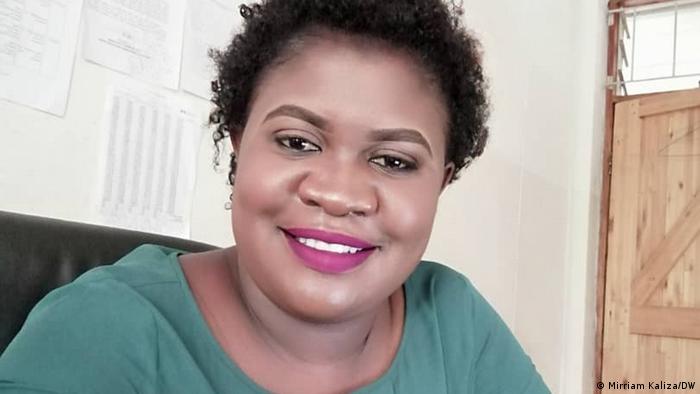 Who are the providers?

Much depends on who the provider is. Because the languages of the former colonial powers are widely spoken in Africa, it was easy for European companies like Vodafone, Orange and Altice Portugal or the Indian Airtel to conquer the markets. In the meantime, however, large African providers — such as MTN from Nigeria or Telkom from South Africa — have also established themselves in many countries of the continent.

“It is clear that they [big, multinational providers] have an advantage,” Schaaper said: “They have the knowledge, the personnel infrastructure, they know about pricing.” A negative consequence is that they have no difficulties displacing smaller, local competitors: “Of course, this has a negative effect on prices,” Schaaper said. In addition, there are competition restrictions in countries that favor state-owned companies.

Hope for improvement in Malawi

In August, the government of Malawi announced a first step to revive the market. President Lazarus Chakwera intends to issue a license to a third party operator alongside Airtel Malawi and TNM. This is linked to the hope that mobile data will finally become more affordable. People like Tabu Kitta will then no longer have to think about whether they can allow themselves to use a smartphone any time they need to.