New data is throwing fresh light on foreign flows in South Africa’s bond market — and the picture is rosier than previously thought.

The JSE Ltd. recently started publishing data on settled trades by foreigners, which shows that money has been flowing into the bond market. A net 21.9 billion rand ($1.5 billion) has been added by non-residents in the year through Oct. 8.

That’s significant because analysts have long relied on a different metric as a way to estimate foreign fund flows, which showed investors taking a record 99 billion rand out of the bond market this year. Exchange officials say the new data on settled trades is a better way to capture actual flows and long-term trends.

“Markets have always obsessed about daily foreign bond-flow data despite the fact it can be quite misleading,” said Peter Attard Montalto, the London-based head of capital markets research at Intellidex U.K. Ltd. “The latest richer data from JSE is therefore very much welcome for a better view on what flows are actually doing.”

Government bonds gained on Tuesday, with the yield on benchmark 10-year securities dropping eight basis points to 9.74% by 4:09 p.m. in Johannesburg. The rand strengthened 0.9% to 14.5517 per dollar, on track for the strongest close in more than a month.
Investor Confidence

The new data back up trends seen in similar numbers from the South African Reserve Bank and National Treasury. It all points to investor confidence in the government’s fiscal policies and appetite for yields that are among the highest in emerging markets, according to Mark Randall, the JSE’s director of information services.

It also helps explain why the rand has held its ground to the dollar this year, even as investors fretted about inflation trajectories and Federal Reserve tapering, according to Henrik Gullberg, a macro strategist at Coex Partners. Other factors supporting the currency included the improving terms of trade for Africa’s most industrialized economy.

The South African currency is one of only four in emerging-markets not to have weakened against the dollar this year. That’s despite the prospect of capital flight when the Fed starts rolling back stimulus. Foreign investors hold about 30% of South African government debt, making the country particularly vulnerable to a selloff. 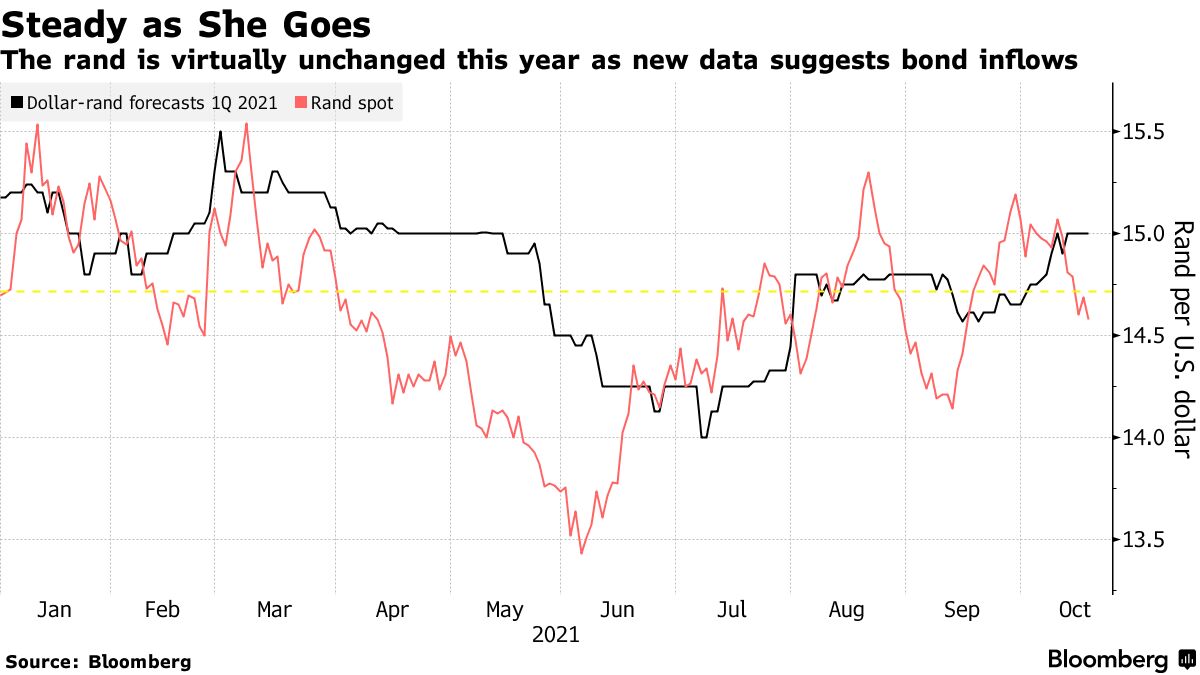 “The South Africa perception has been improving over the past months on a relative basis,” said Guillaume Tresca, a strategist at Generali Insurance. “In the high-yielding space, South Africa has been relatively doing well, benefiting from better terms of trade, higher commodity prices and the lack of political noise.”

The data anomaly arises because of the way bond trades are reported and settled, according to Randall. While daily bond-trading data are an accurate reflection of transactions reported to the exchange, some of those trades do not settle within the required three days, and are rolled over to a different settlement date. Some trades do not settle at all. In those cases, a cancellation trade isn’t booked.

The settled-trade data provides a longer-term view on investor positioning, while data on daily trades provided a picture of market liquidity rather than capital flows, Randall said in an emailed response to Bloomberg’s questions. “This is good news for the South Africa Inc. story, as the settlement data represents net inflows by foreigners into the market.”