The global pandemic has had the unintended consequence of speeding up Africa’s digital economy(1).

The transition to digital services and the adoption of transformative mobile technologies have been rapid in the last two years with e-commerce being the biggest beneficiary(2). This digital transformation has been driven by homegrown solutions(3)- some of which are built on blockchain and crypto(4). The world is moving to Web3, a new iteration of the worldwide web-based on decentralization with blockchain and crypto technology, allowing companies to build new things that provide unique value to society(5). In this first essay for 2022, I am going to expand on how that is happening instead of trying to predict what will happen.

In 2020, the International Finance Corporation (IFC) and Google estimated Africa’s Internet economy to reach US$180 billion by 2025, representing 5.2% of the continent’s gross domestic product (GDP). By 2050, they project it to reach US$ 712 billion, or 8.5% of the continent’s GDP(6). This growth is driven by a combination of increased access to faster and better-quality Internet connectivity, a rapidly expanding urban population, a growing tech talent pool, a vibrant startup ecosystem, and Africa’s commitment to creating the world’s largest single market under the African Continental Free Trade Area. 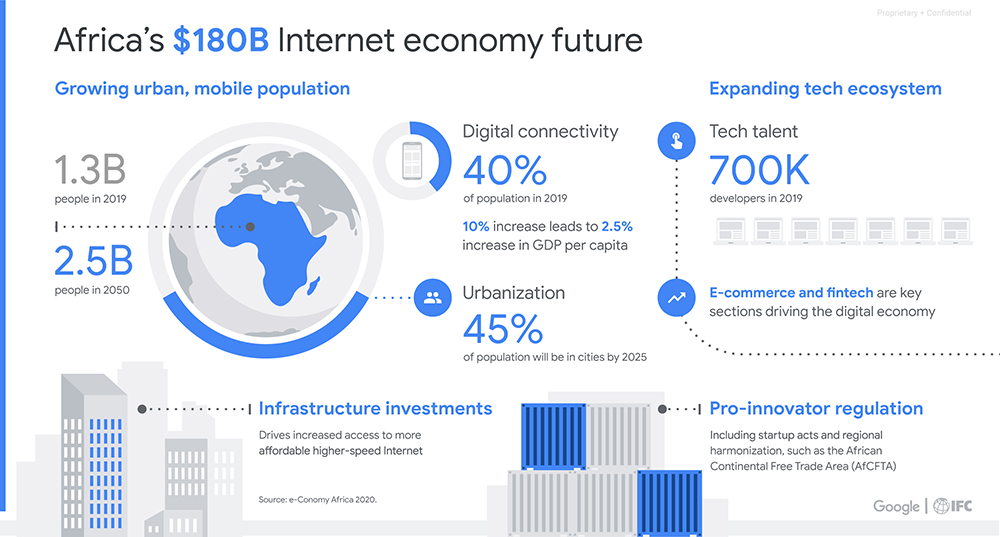 “The Mobile Economy Sub-Saharan Africa” report by the Global System for Mobile Association (GSMA) in September 2021, puts mobile technologies and services at 8% of GDP of sub-Saharan Africa in 2020 with a contribution of more than US$130 billion in economic value-added.

Also read: The Fintech Unicorns of the Federal Republic of Nigeria

This was made up of US$31 billion from the mobile operators and US$7 billion from other industry stakeholders. Indirect benefits made up US$11 billion and productivity gains brought US$83 billion of benefits. The economic contribution is set to grow past US$150 billion by 2025, including benefits from improved productivity(7). 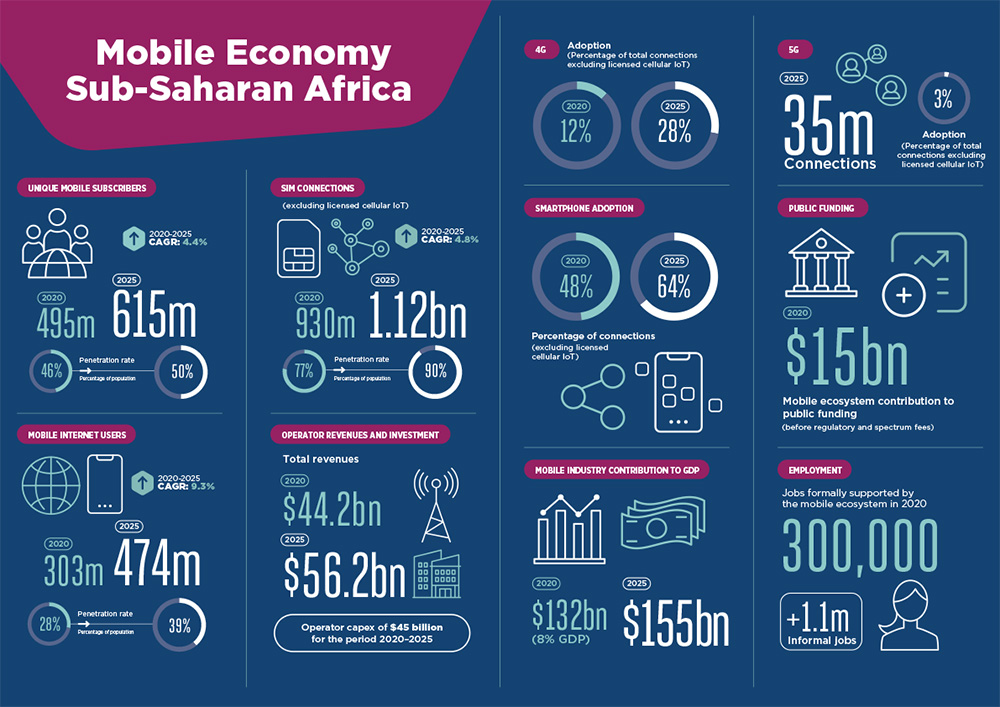 Google and IFC are estimating the Internet economy to reach 8.5% of GDP by 2050, the GSMA puts the Mobile Economy in Sub–Saharan Africa in 2020 at 8% of GDP. While the Google and IFC work is limited to the Internet economy, the GSMA’s is about the mobile economy which includes services such as Short Messaging Service (SMS) which is a non-Internet service and predominant in Africa. For example, Mobile Money (MoMo) which is the leading form of electronic payment in Africa is an SMS based service – it does not need the internet to function. Hence it is available in the remotest parts of Africa where there is limited to no access to the Internet. Recent interactions of MoMo links it to the web so that it can be used for online purchases. The GSMA report also looks at other ancillary services that are born out of mobile services, for example, the agents that accept and process the cash into and out of MoMo are a totally new entrepreneurial addition to every economy where MoMo operates. They create employment and generate economic activity that is captured in the GSMA report so that report gives a more accurate account of Africa’s digital economy at 8% of GDP in 2020. My estimation is, 25% of Africa’s GDP by 2025 and more than 50% by 2050 – excuse this prediction but I had to make it to illustrate the larger point that Africa’s digital economy is going to be dominant by the middle of the century if not earlier. Web3 will be a crucial part of that development.

Also read: Are Mobile Operators the next Fintech Startups?

The venture capitalists (VCs) who provide the funding for these tech ventures invested more than US$5 billion in 2021 according to a 1 January 2022 report by Briter Bridges(8). This is equivalent to the combined African startup inflows recorded in 2018, 2019, and 2020. While it is regrettable that the majority of the funding is international, local capital seems to find validation in international capital which suggests that we are going to see more local capital going into these tech ventures going forward. Fintech accounted for more than 60% of this funding(9) and rightly so because of the innovation in MoMo which is the foundation for Fintech in Africa. It is impossible to participate in the digital economy without the existence of an electronic payment system, but now that we have a well-established Fintech ecosystem, it is having a cascading effect on e-Commerce and delivery. For example, Hubtel, a Ghanaian fintech, branched into e-Commerce and during the pandemic, their food delivery business took off(10). They were also one of the three Ghanaian companies that built Ghana.Gov – a payment platform for government services in Ghana(11). Flutterwave, a Nigerian fintech launched Flutterwave Store – a portal for African merchants to create digital shops to sell online(12). They followed that with the acquisition of Disha to enter the creative space(13). Egypt’s ride-sharing company, SWVL is going public via a SPAC merger that would value it at US$1.5 billion – it is the beginning of many more such deals. Global e-commerce jumped to US$26.7 trillion during the part of the pandemic – online retail sales’ share of total retail sales rose from 16% to 19% in 2020, according to estimates in a UNCTAD report published on 3rd May, 2021(14). 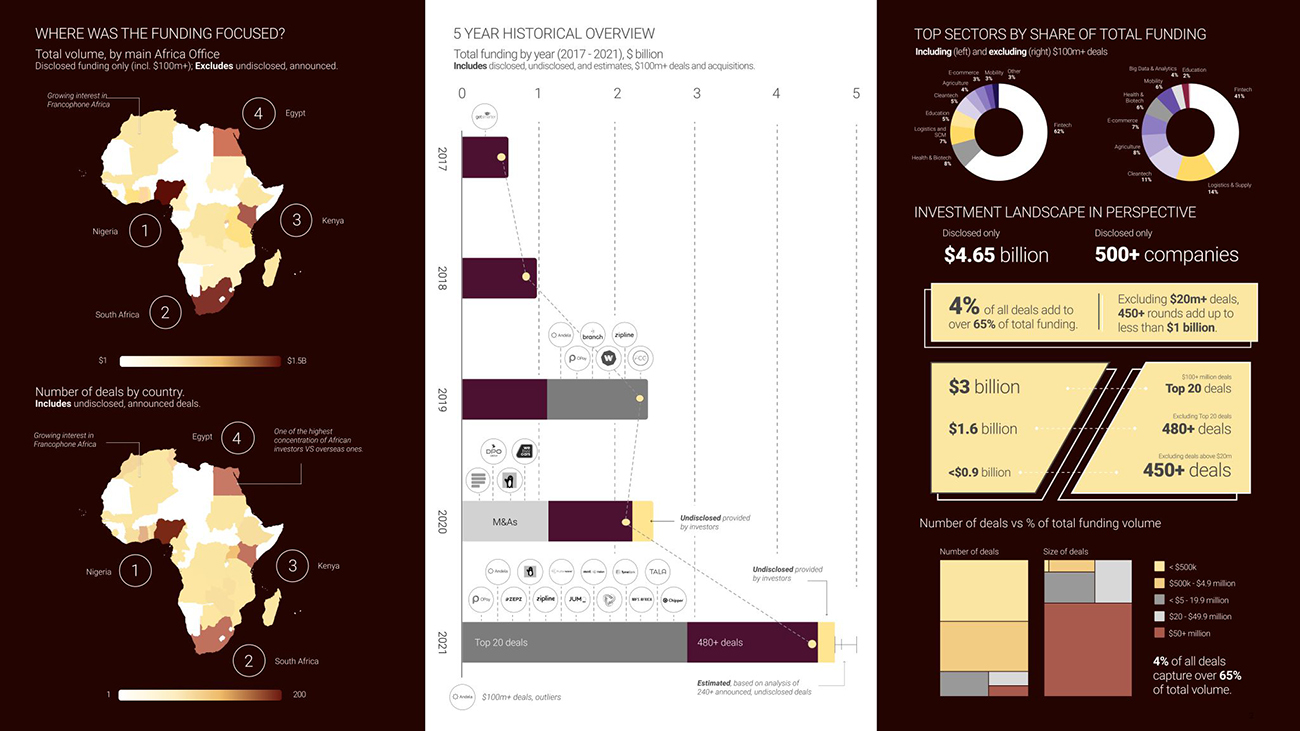 The pandemic encouraged Healthtech innovations like Bisa from Ghana which allows you to get first-hand information about Covid-19 and other medical conditions and access medical professionals online by logging on the app(15). Over the last twelve months, Healthtech deals have reached over US$77 million in 56 funding rounds(16). mPharma from Ghana just closed a US$35 million series D(17) while Africa Health Holdings closed an US$18 million series A last November(18) and Nyaho closed US$5.2 million – which was partly used for their Healthtech platform, Serenity Health(19). South Africa’s RecoMed raised US$1.5 million to scale it’s online healthcare marketplace. 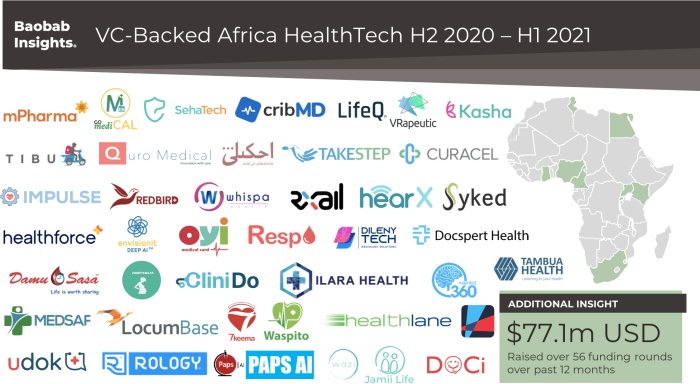 In December 2021, AlitheiaIDF, a leading female-run fund manager raised US$100 million to invest in more female founders(20). Aruwa Capital Management, another female founder-focused fund made three investments in November 2021(21). Future Females Invest Angels (FFI Angels), an all-female angel investor group based out of Mauritius made four deals in 2021(21). The effort to close the gender disparity in funding in Africa is changing but a lot more needs to be done to close the gender gap in Africa’s digital economy(23).

“Our review of African countries’ policies and strategies demonstrates that most African countries have digital agenda documents. These are found as legal texts, stand-alone digital strategies, as sections of national development plans or within aspects of other policies.” said Olumide Abimbola, Faten Aggad and Bhaso Ndzendze in their recent publication which looked at the availability of digital agendas across the continent(24). 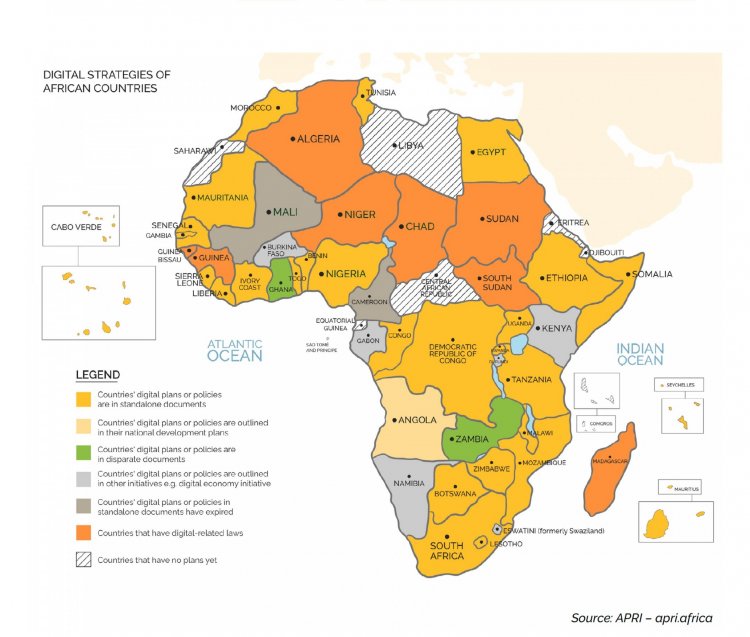 In Zambia, part of the government’s digital agenda is to launch their own satellite(25). A local startup Ignitos Space has a slightly different ambition, to use satellite data for precision Agriculture, etc(26). When the pandemic hit, Ghana’s Ministry of Education moved to use eCampus as the online learning platform for students who were home because of school closures(27). Ethiopia’s Ministry of Education announced a partnership with Cardano to create a blockchain-based digital identity for five million students and teachers – the biggest blockchain deployment anywhere in the world(28). Cardano, one of the leading crypto platforms has a program focused on Africa(29). African blockchain and crypto companies like Topit, Luno and Yellow Card which recently raised US$15 million are leading the building of exchanges that trade globally(30). According to the BBC, Nigeria ranks third globally in terms of countries with the highest bitcoin trading volumes last year, after The United States and Russia. But in February, Nigeria abruptly announced that they were barring their banks and financial institutions from dealing in or facilitating transactions in cryptocurrencies(31). Nigeria’s central bank launched the country’s own electronic currency, eNaira in October – the first in Africa(32) and Ghana’s central bank plans to do same(33).

These technologies started off on Web1 which was predominantly text-based with SMS as the holy grail in Africa, with a subsequent move to Web2, a combination of the spoken word and moving images, aka multimedia. We are now moving to Web3 which is characterized by a great decentralization of the web using blockchain and crypto that creates transparency. The biggest pain point of Web2 was the centralized and controlled nature of multimedia databases that predominantly rested with big tech companies, including Facebook, Google, YouTube, Twitter, etc. Web3’s fundamental premise is to change that, so we don’t need permission from the big tech companies to use our data from their databases – a permissionless world beckons. Kenya’s ranking as the world’s leader in peer-to-peer (P2P) trading volumes for the second consecutive year in 2021 is going to challenge other countries to adopt more friendly attitude towards cryptocurrencies(34). Senegalese American award-winning artiste Akon argued that crypto could change Africa’s future(35) – that future is here.

Cabestiva company has said it will be recruiting workers for the Cabinda refinery as from September 26 to October 7,...

Join 100,339 other subscribers.
No Result
View All Result