South Africa’s ‘silent revolution’ as those with cash go solar

Thanks to his rooftop solar panels, Pierre Moureau only notices the blackouts that regularly plunge South Africans into darkness when complaints pop up on his Johannesburg neighbourhood’s WhatsApp group.

“I have a certain standard of living,” said the 68-year-old financial planner, who likes to unwind in his home sauna. “I want to be able to live according to the way I am.”

Also read: South Africa gets another unsolicited bid for a Telkom deal

But many South Africans are not waiting for government action and their impatience has driven a boom in small-scale solar installations.

“I cannot be without power. It’s as simple as that,” said Moureau, whose panels power his home as well as his adjoining office. “Every minute I’m down costs me money.”

Once installed, the panels will increase the 2.1 gigawatts of estimated existing small-scale solar generating capacity by some 24%, surpassing what the government has managed to procure in a decade of its utility-scale solar strategy.

“It’s completely unrecognised by the government as to how big an industry it’s become,” said Frank Spencer, spokesman for the South African Photovoltaic Industry Association. “It’s a silent revolution.”

In a country that requires 4-to-6 gigawatts of additional production to end widespread power cuts, known locally as loadshedding, most systems are not registered and feed nothing back onto the power-starved grid.

And their high cost means, for now at least, they are only a solution for the relatively well-off, deepening divides in what is already one of the world’s most unequal societies.

“If you’ve got money, you can do it yourself,” said Solly Silaule, who, like nearly half of South Africans, is unemployed. “But the people who are suffering have no money to buy those panels.”

Despite abundant solar and wind resources, South Africa’s government has proved reluctant to adopt renewable energy. Until its relaunch in 2021, pressure from mining unions had ensured a programme of private, utility-scale projects was frozen for years.

But the decline of debt-crippled state power utility Eskom, which produces 80% of its power from coal, has increased the urgency of finding alternatives.

“Over the past, I’d say 24 months, we’ve seen a continuous increase, month on month in demand,” he said. “We’re seeing interest across the board.”

By the time one of his customers, Leigh Driemel, decided to install a 42-panel system at her swimming academy last year, her monthly power bill was running to around 26,000 rand and power cuts had begun forcing her to cancel classes.

“We were going to end up charging 300 rand for a swim lesson,” she said. “Who’s going to pay that? Our margins kept getting squeezed.” 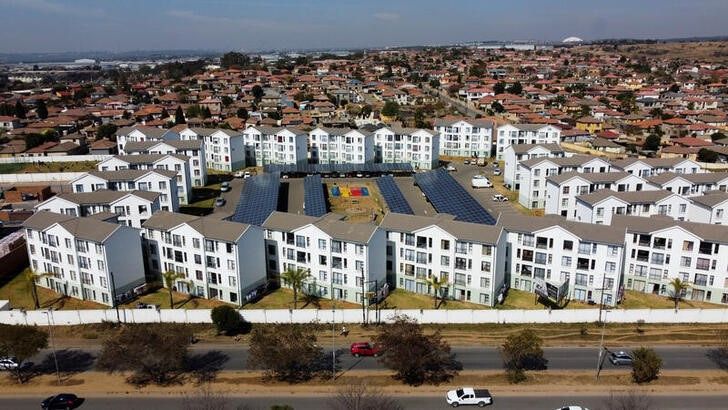 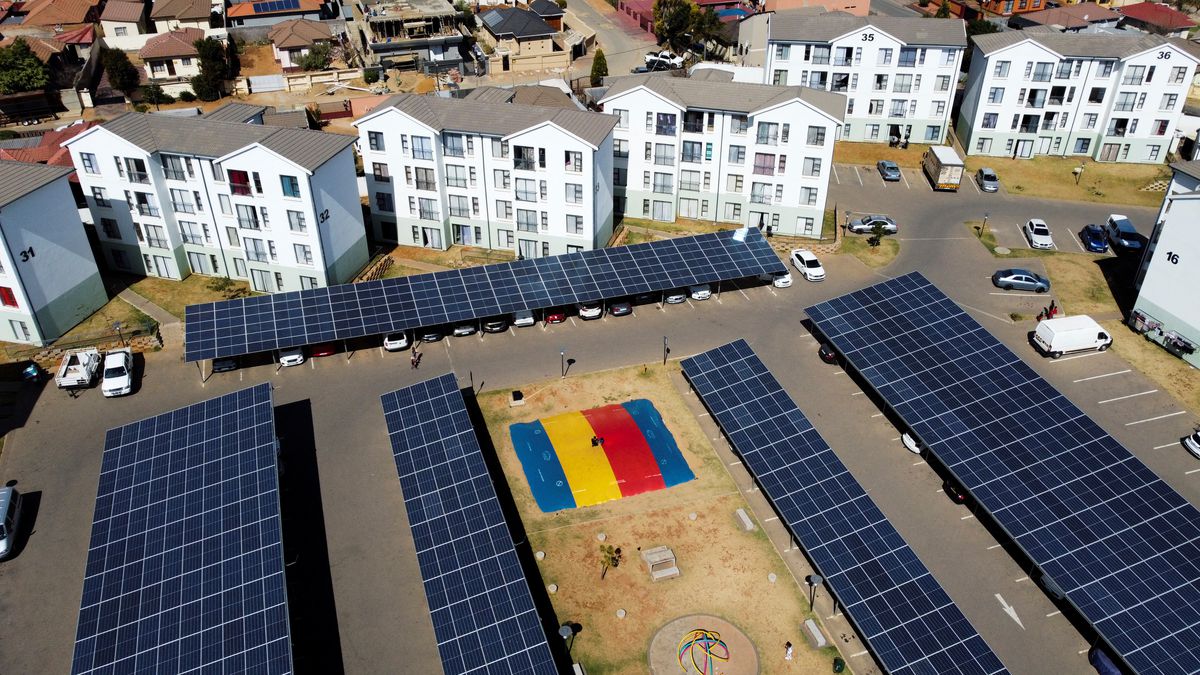 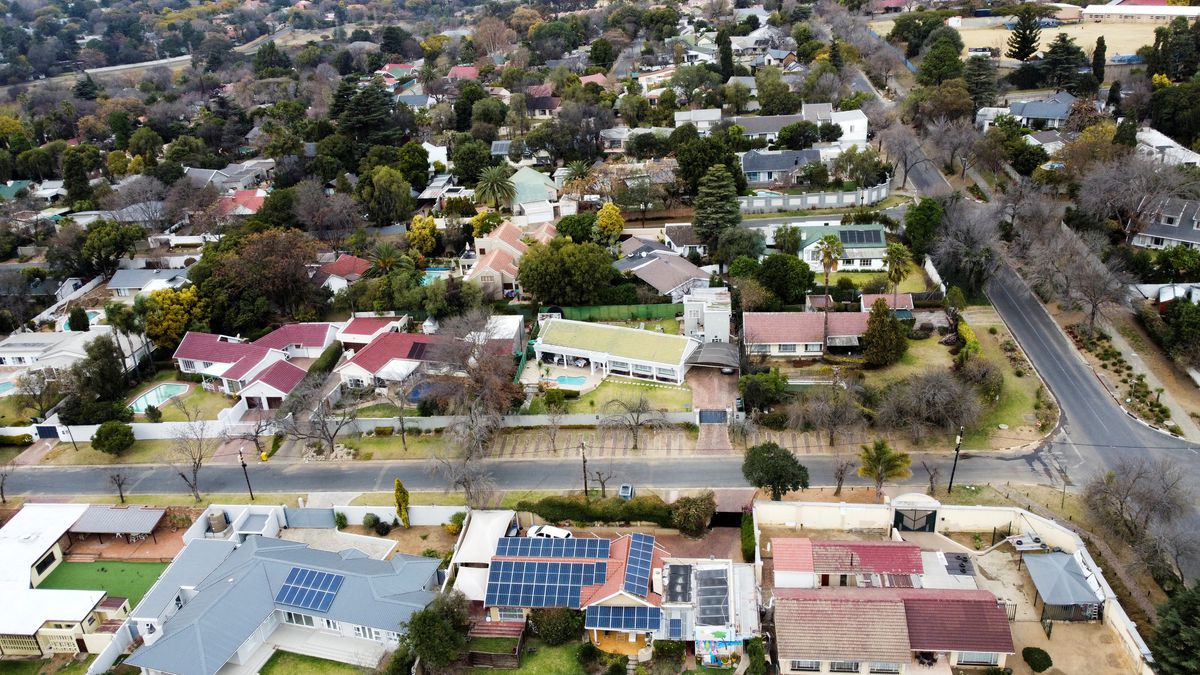 She’s now insulated against blackouts and has cut her electricity bill by over 40%.

Across South Africa, private residents as well as businesses large and small are making similar calculations.

Cheaper solar PV and batteries, as well as the loosening last year of a regulation that had required government approval for systems of more than 1 megawatt, bolster the case for self-generated solar.

“Everyone is saying ‘Okay, we’ve had enough. We need a solution,'” said Mark Evans, director of Partners in Performance, a South African business advisory company.

Advocates of small-scale solar say South Africa has a long way to go.

On a wall in Granville Energy’s main office, large screens show in real time how much power clients’ solar systems produce. Having fully charged its battery, one home used just 20% of its generating capacity.

“It’s sad and it’s unfortunate that we’re wasting so much capacity,” Tabi said.

Announcing his planned reforms last month, Ramaphosa said Eskom will establish a pricing structure to allow those with solar panels to sell electricity they do not need back to the utility, a common practice in many countries.

As it stands, relatively few South African solar users feed power to the grid, and industry insiders say most small-scale systems have not been declared to the authorities, despite a legal requirement to register them.

In Johannesburg alone, it is estimated that there are more than 20,000 unregistered solar systems, most of them residential, an official from the city’s power distributor said.

In the absence of attractive tariffs, those customers are increasingly going off-grid.

“They are lost to the energy system forever,” the official, who asked not to be named, told Reuters. “It is far better to keep them on the grid, to be part of a working grid community.”

A fair power buy-back tariff could encourage more South Africans to register and plug in their systems and give Eskom breathing room.

But it will likely do little to overcome the main obstacle for most potential rooftop solar customers: cost.

While banks are beginning to help, with ABSA (ABSPp.J) and Nedbank (NEDJ.J) offering dedicated small-scale solar financing products, rooftop systems remain out of reach for most poor South Africans such as Prince Mkhize.

He works at a car wash in Alexandra, the low-income, high-crime township located just across a busy motorway from Sandton – the Johannesburg financial district dubbed “Africa’s richest square mile”.

“We’re standing here eight hours with no cars,” he said. “When there’s loadshedding, there’s no work.”

Merger and acquisition (M&A) deals across Africa’s oil and gas upstream sector in 2022 have reached a new record with...

Join 100,330 other subscribers.
No Result
View All Result