A landmark $8.5 billion deal to help wean South Africa off its dependence on coal is hanging in the balance amid fraught negotiations with rich donor countries over how the funds should be spent.

The climate finance deal, unveiled at UN-led talks in Glasgow last year, was hailed as a prototype for helping other coal-dependent developing countries transition to cleaner energy sources. Its success or failure could have a knock-on effect at next month’s COP27 summit in Egypt, which is expected to focus on the financing needs of poorer countries adapting to a warming atmosphere.

South Africa, which relies on coal for more than 80% of its power and is the world’s 13th-biggest source of planet-warming gases, is pushing for cheaper money in the form of grants and low-interest loans, people familiar with the talks said, declining to be named as negotiations are private and ongoing.

One key factor holding back the deal is the lack of detail South Africa has given on how it will spend the money its partners – the US, UK, France, Germany and the EU – will invest, the people said.

Negotiators have been aiming for the UN summit as a deadline, mindful that climate deals often come down to the wire. Key stakeholders are privately expressing confidence that some version of the South African finance plan will be ready.

“There’s legitimate criticism and debate on whether or not this is the kind of best model, but a decent amount of political capital has been invested,” said Jake Schmidt, senior strategic director of the international climate program at the Natural Resources Defense Council, a US non profit. “We need to make it succeed because others are watching it.”

In theory, a deal with South Africa, which has a mid-sized power sector and elderly fleet of coal-fired plants, should be easier to conclude than those for bigger countries like Indonesia, which has recently commissioned new facilities, or India, the world’s No. 2 coal user. Negotiations are underway on a similar energy transition package in Indonesia with the goal of unveiling that in November, and donor countries are hoping to use the model to spur similar shifts in India, Senegal and Vietnam.

It’s also key at a time when Russia’s invasion of Ukraine has seen gas supplies to Europe fall, prompting some countries to turn back to coal plants that were being decommissioned as part of international commitments to cut emissions and limit global warming to 1.5 Celsius above pre-industrial levels.

Despite ever more strident climate warnings, however, coal use is set to rise 0.7% this year to eight billion tons, the record level it reached almost a decade ago, according to the International Energy Agency.

Countries that are backing the South African deal, such as Germany, are using more coal themselves to stave off a winter energy crisis. Coal use in Europe will likely rise 7% this year after a 14% jump last year, according to the IEA.

South Africa has produced an initial draft of an investment plan but is behind schedule in producing a second, more detailed, version, some of the people said.

Vincent Magwenya, a spokesman for South African leader Cyril Ramaphosa, didn’t answer calls made to his mobile or respond to a text message seeking comment. South Africa’s Presidential Climate Finance Task Team, which is heading the talks for the country, declined to comment.

The investment partners have stressed that the deal is primarily meant to allow some of South Africa’s coal-fired plants to close and be repurposed to produce renewable energy, with some funding also available to expand the national power grid in a country that suffers regular blackouts.

South African negotiators, however, have pushed for possible funding to develop green hydrogen — a cleaner fuel that could offer a solution for heavy industry or aviation — and electric vehicles.

The exasperation on both sides is evident.

“We need President Ramaphosa and the political establishment to come on board,” John Kerry, the US special presidential envoy for climate, said in a Sept. 28 interview with Bloomberg TV.

Barbara Creecy, South Africa’s environment minister, said the complexity of the deal was underestimated and while she hopes there’ll be an announcement at COP27, she can’t guarantee it.

There are partners “and development institutions with different terms and conditions, and dependent on their own fiscal cycles and so on. So it’s a complicated process,” she said in a Sept. 14 interview.

There’s also concern about the UK’s commitment given the recent change in leadership and radical changes to economic policy that have shattered confidence in its currency and government bond markets.

There are “legitimate concerns about whether or not the UK actually has money,” Schmidt said. “The underlying question is does this new government want to continue to put money into international climate stuff and will they stick to their end of the bargain.”

The UK’s Department for Business, Energy & Industrial Strategy didn’t immediately respond to a request for comment.

Despite the frustrations, some progress is being made.

What on Earth?The Bloomberg Green newsletter is your guide to the latest in climate news, zero-emission tech and green finance.

Both the German and French embassies in South Africa confirmed that their countries, via finance institutions KFW and Agence Francaise de Developpement, are negotiating loans with the South African National Treasury that would be channeled to Eskom Holdings SOC Ltd., the state power utility that’s the country’s biggest emitter of greenhouse gas. The Treasury said announcements on loans may be made in a budget update on Oct. 29. 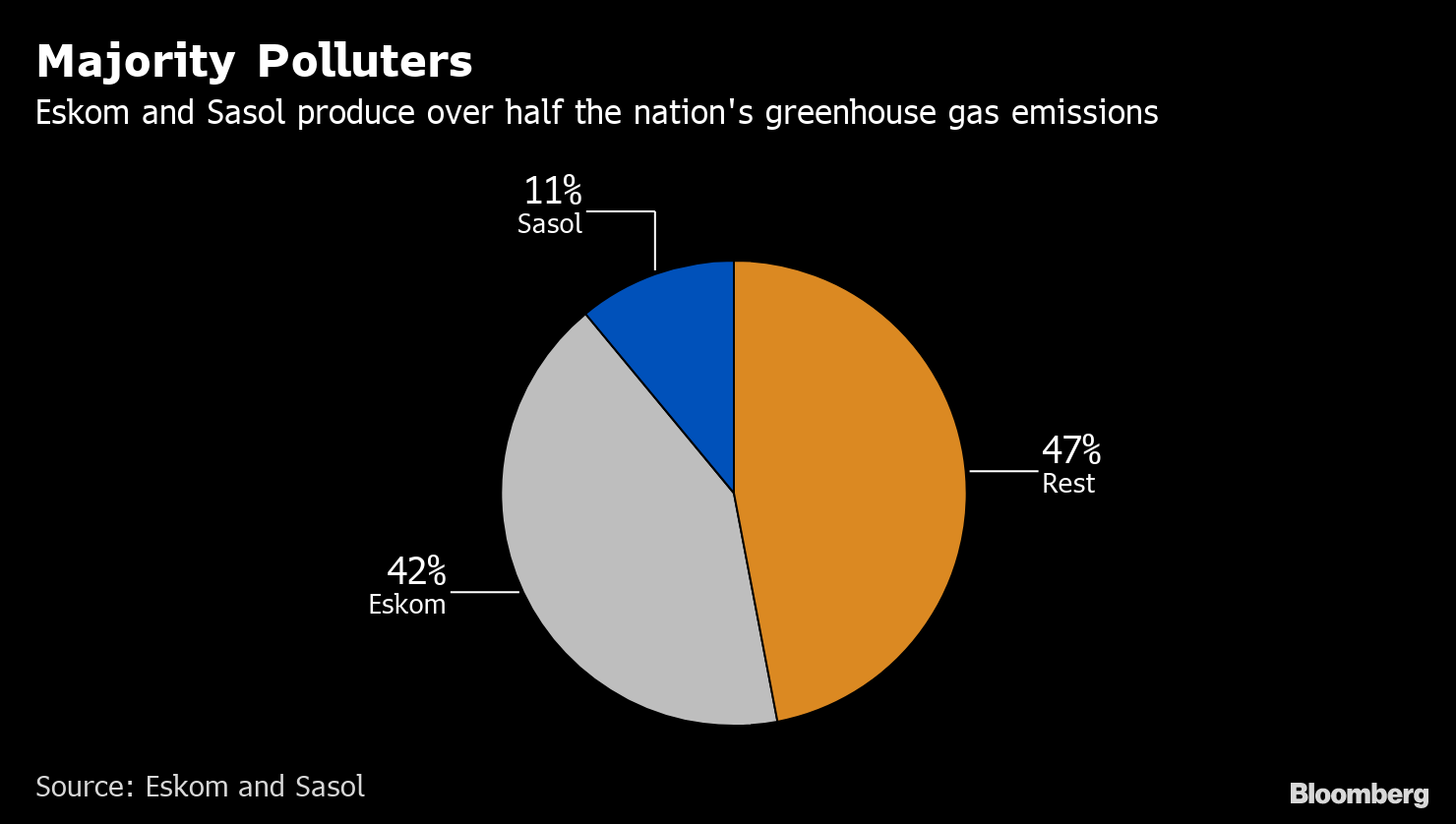 Only a small portion of the French finance would come in the form of grants and those would cover the cost of studies, people familiar with the talks said.

John Morton, the US Treasury’s climate counselor, said such complex agreements require “very difficult political decisions on behalf of governments” but the allure of finance can help drive transformative change.

“The aggregation of a large amount of capital – public, private and in some cases philanthropic,” he said, “can in fact enable difficult political decisions related to energy transition.”