Consumer prices rose 7.5% in September; median est. was 7.6% Traders are fully pricing in a 75 basis-point hike in November

South African inflation decelerated for a second straight month — a slowdown that’s unlikely to sway the central bank from raising interest rates in November to rein in price growth.

The headline consumer-price index rose 7.5% in September from a year earlier, compared with a 7.6% increase in August, Pretoria-based Statistics South Africa said Wednesday in a statement on its website. That was less than the 7.6% median of 13 estimates in a Bloomberg survey of economists.

Forward-rate agreements starting a month from now, used to speculate on borrowing costs, are fully pricing in a 75 basis-point hike at the next meeting of the central bank’s monetary policy committee on Nov. 24. The median estimate of 22 economists in a Bloomberg poll conducted last month predicted a half-a-percentage point increase after back-to-back 75 basis-point hikes. 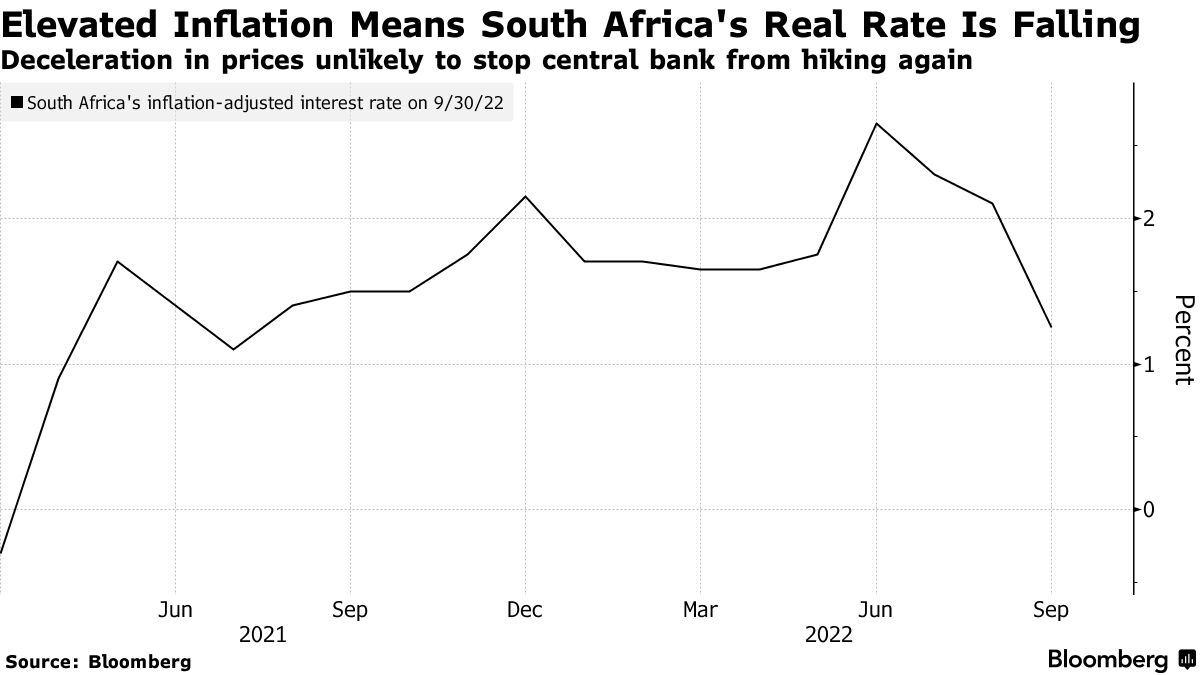 Policy makers have already increased the key rate by a cumulative 275 basis points since November to 6.25%. The implied policy rate path of the central bank’s quarterly projection model, which the MPC uses as a guide, indicated in September the benchmark will be at 5.6% by year-end.

That suggests the committee has been front-loading its fight against inflation and there may be room to cool the hiking cycle, especially as record power cuts by Eskom Holdings SOC Ltd. and a strike at Transnet SOC Ltd., South Africa’s state-owned logistics company that operates most of the nation’s harbors, crimp economic growth.

The main drivers of inflation in September were food and transport. Core inflation, which excludes volatile items like food and fuel, accelerated to 4.7% from 4.4%, suggesting that underlying prices pressures are building.

Still, inflation won’t necessarily ease in the coming months, especially at a time when South Africa is seeing increasing demands for higher wages. International oil prices are also rising after OPEC’s decision to cut output and the rand is under pressure from expectations of more aggressive monetary tightening in the US.

Price growth has breached the MPC’s 3% to 6% target range for a fifth straight month. It’s remained above the midpoint, where the committee prefers to anchor inflation expectations, since May 2021.

Governor Lesetja Kganyago said in an interview with Johannesburg-based broadcaster eNCA on Tuesday that borrowing costs will only be lowered when inflation’s retreat toward the midpoint of the target band is sustained.

“Once you see inflation declining back within the target and moving toward 4.5%, which is what we actually aim for, that would be telling you that the interest rate cycle has done its job,” he said. “If that is sustained, then it’s time to adjust policy.

South Africa’s benchmark government bonds erased declines after the inflation data was published, with 10-year yields falling five basis points from a session high to trade little changed at 11.29% as of 10:14 a.m. in Johannesburg. The rand pared losses against the dollar to trade 0.3% weaker at 18.1611.

The Australian mining company Triton Minerals, which holds the rights to three graphite deposits in the northern Mozambican province of...